If you’re looking for a full-screen, notchless phone today, consider the V15 Pro as one of your top choices. What’s so good about it is that the phone goes all-in in highlighting its full-screen design – dubbed Ultra Fullview – by using a premium Super AMOLED display, which is the same type you see in Samsung flagships. The result: better contrast, livelier colors, and deeper blacks.

The Super AMOLED is one of the key differentiators from the standard V15, which uses a standard LCD screen. The difference, unsurprisingly, is big as the V15’s display looks just a little bit washed out when placed next to the V15 Pro’s. Super AMOLED has always been a treat to look at, so it’s nice to see it in a phone whose key feature is a full-screen display.

It’s a joy to watch movies on a notch-less screen, and after getting used to it, notches and other similar on-screen front-camera housings may feel a bit more annoying.

So where’d Vivo put its camera? On the top-right portion of the phone, the camera pops up when you want to take a selfie, a setup that Vivo officially calls “Elevating Front Camera.” It’s quiet, discreet, and you really barely notice it when it comes out.

You might think that there’s some wait time for taking a selfie because the camera has to come out, but there really is none. It’s mostly just like booting up any other front camera in traditional phones.

So far, in my 3 weeks of use, there hasn’t been front camera hiccups. Anything with moving parts tempt disaster (don’t drop the phone when that camera is up!) but, for the time being, we’re taking Vivo’s word that they’ve made this very sturdy. The back itself has fewer obtrusions. Save for the camera array, the back is clean and smooth, as the phone makes use of an in-display fingerprint scanner instead of a traditional rear-mounted scanner. The in-display scanner has worked without a hitch, being the 5th-generation of its kind, and considerably faster than the implementation in last year’s Vivo X21.

Phones today have many tricks that go towards improving image quality. In the case of the V15 Pro, that happens to be its “48 Million Quad Pixel” sensor. What it does is it combines 4 adjacent pixels into one large pixel, and in general, a larger pixel size translates to a better ability to absorb light – and with more light, more details, more accurate colors, and just overall image quality.

Phones, because of their size, aren’t able to use large image sensors, so Vivo’s solution is to combine pixels to make one larger pixel.

And the resulting images are great – sharp, with great dynamic range, and lively colors – and satisfying at this price range.

The bokeh quality – the phone has a depth-sensing camera – is very subtle. I would say, very soft and natural, not overdone, not calling attention to itself. Bokeh being subjective though, some might prefer more blurred-out backgrounds, and there may be other phones for that. But if you like the bokeh softer, this is a good choice.

What’s impressive about it is it captures hard-to-render details like hair strands quite nicely. It’s still very crisp when you zoom in. And even the really bright spots still retain some detail, with the camera appearing to fix overexposed areas.

There’s no wide-angle option for the front camera though; only the rear array has that option.

Night shots are really quite nice too, with AI Super Night mode, which combines multiple shots into one to come up with a sharp, properly exposed photo. 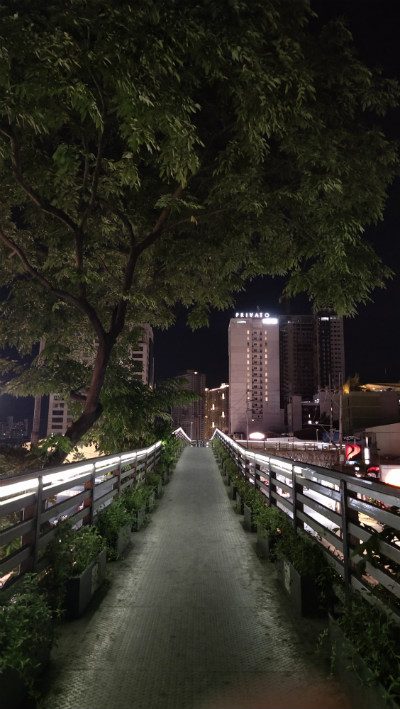 Other things we love

It still has a headphone jack! Call us traditional, but having an exclusive port for headphones is still very much desirable.

The phone lasts a day with regular use.

Things to look out for

It uses standard micro-USB and not USB-C.

The software can sometimes feel a bit buggier than the Apple, Samsung or Huawei phones, and is about as buggy as some OPPO phones I’ve tested. I haven’t had sufficient time with competing Xiaomi or Realme models to see if those phones have some hiccups too. There was a time when I was having to input my password twice to unlock the phone, which a software update has since seemed to have fixed.

It faces really tough competition from the Xiaomi Mi 9, which is cheaper at P22,990 but has the flagship Qualcomm Snapdragon 855 chipset compared to the V15 Pro’s Snapdragon 675AIE chipset, and also has an in-display scanner. Chipset isn’t everything but it is something. The Mi 9 doesn’t have the full-screen design that the V15 Pro has though.

Its plastic body may be off-putting in this price range.

The P23,999 price is a strange place for the phone to be in. Overall, it’s a great package. We’re seeing technologies and designs that just a year ago were only found in high-end concept devices. The full-screen design makes it hard to go back to notched phones, the in-display scanner may be the fastest I’ve ever seen, and the general image quality competes with much more expensive flagships.

But at its price, it’s facing a litany of competition from the Huawei P30 Lite, Samsung Galaxy A50, the standard V15, the OPPO F11 Pro, and the Xiaomi Mi 9, all of which are cheaper than the Pro and will merit serious consideration for anyone looking for a phone in the P15,000 to P25,000 range.

The V15 Pro may arguably have the best combination of technologies in this batch but at a few thousand pesos cheaper, consumers can get a phone with similar performance, sacrificing a few features here and there. – Rappler.com

(Disclaimer: Vivo lent a review unit for the purpose of this article.)