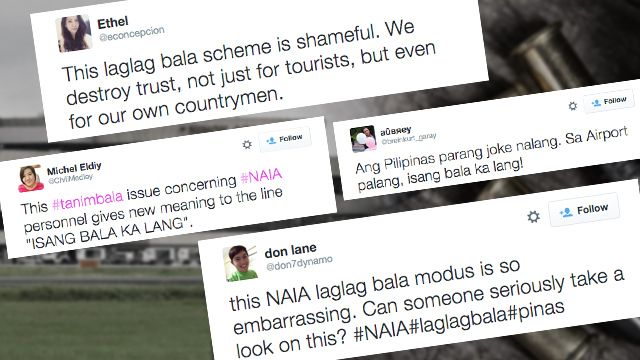 The late Fernando Poe Jr’s famous line from the movie of the same title has been going the rounds on social media. Netizens have been sharing reports of a modus known as ‘laglag-bala’ or bullet planting that has been occuring at the Ninoy Aquino International Airport (NAIA). (READ: ‘How to curb ‘laglag-bala’ modus and airport extortion‘)

The most recent incident that caused outrage on social media involved a 56-year-old overseas Filipino worker (OFW) named Gloria Ortinez. She was arrested and prevented from leaving the country for Hong Kong after authorities at NAIA 2 claimed to have found a bullet wrapped in red cloth inside her bag.

Ortinez has denied that the bullet was hers. Ortinez also said that she would never bring the bullet with her as she was well aware of Hong Kong’s strict security laws.

The arrest triggered public outrage, and netizens were quick to react on social media.

Grace Poe will have the unanimous votes of all NAIA security personnel. They're avid FPJ fans, specially of "Isang Bala Ka Lang". Boom! 😉

A lot of netizens expressed anger against authorities for NAIA’s poor security and failure to address the issue.

Lunatics should be in asylums, not working in an airport. Fire every customs, immi and airport personnel, let them blame Laglag-bala boy.

I hope NAIA management realises how much is lost for every laglag bala case. The magnitude for its ripple effect is no joking matter.

This laglag bala scheme is shameful. We destroy trust, not just for tourists, but even for our own countrymen.

The laglag-bala incident is already becoming an international embarrassment. #NAIA

My God NAIA please act faster this has to stop! #laglagbala i hope those people who did this will burn in hell.

Some netizens are scared of falling victim to the scheme too.

off to a vacation next week but having doubts now.. the excitement was killed by the laglag bala news.. 🙁 scary.. #laglagbala

These laglag bala incidents in naia scares me haha

I love to travel but I heard about the "laglag bala modus", scary. Shame on you, whoever you are. To our gov't, what's up? Any actions?

Now OFWs and balikbayans are to worry two things when they come n go n the country. The "bullet planting" n the checkups of balikbayan boxes

The "tanim-bala" extortion at NAIA happened several times, but the @DOTCPhilippines is again blind and callous.

Some also expressed their doubt that the OFW would dare bring a bullet.

Some politicians also decried the incident. Senatorial aspirant and longtime OFW advocate Susan Ople called for Ortinez’s release. She said it was clear that the longtime OFW was innocent, and that she should not face charges of illegal possession of ammunition. (Read: ‘Susan Ople calls for release of NAIA ‘bullet planting’ scam victim‘)

(Why would she risk the job waiting for her in Hong Kong for one bullet? As a longtime OFW, she is quite aware that carrying ammunition is prohibited under Philippine and Hong Kong laws.)