#KamiTidakTakut: Indonesians unfazed in the face of terror 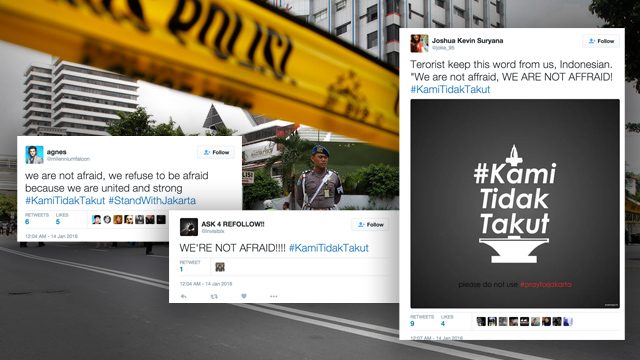 MANILA, Philippines – It was supposed to be just life as usual for many residents of Jakarta on Thursday morning, January 14, until explosions and gunshots shook Indonesia’s capital city, killing at least 7 people.

Photos and videos of the attacks quickly spread on social media, and both local and international media outlets.

Reactions poured in from across the globe – panic, fear, sympathy for the victims. Jakarta quickly trended on Twitter and social media users asked the world to #PrayForJakarta.

Thinking of everyone in Jakarta. I'm scared,confused. Where is humanity? #PrayForJakarta

Aren't we all human?Then why can't we live in peace? #PrayForJakarta

everyone in Jakarta please be safe, God will always be with you x #PrayForJakarta #KamiTidakTakut

I'm so sad of what's going in this wonderful world rn #PrayForJakarta God,help us.

But Indonesians countered the attacks with an even stronger message of courage and hope – #KamiTidakTakut, which means “We are not afraid.”

The whole point of terrorism is to spread terror, to make us afraid. Together, with God, we're unbeatable. #KamiTidakTakut

Terorist keep this word from us, Indonesian. "We are not affraid, WE ARE NOT AFFRAID! #KamiTidakTakut pic.twitter.com/k4zktqs7Lw

we are not afraid, we refuse to be afraid because we are united and strong #KamiTidakTakut #StandWithJakarta

Peace begins from your attitude, your thoughts, your minds. And of course Yourselves #IndonesiaBangkit #KamiTidakTakut

We are not afraid! Because we are one!! Bhineka Tunggal Ika!! #KamiTidakTakut

Indonesian national police spokesman Anton Charliyan said it was not yet clear which group had carried out what Indonesian President Joko Widodo called “acts of terror.”

But according to him, the Islamic State (ISIS) group issued a cryptic warning before the attacks in Jakarta.

In a 52-page study published by Quilliam, the world’s first counter-extremism think tank, it was revealed that Twitter is also the extremists’ choice for propaganda, using hashtags to forward their agenda, recruit new members, and incite fear. (READ: Twitter-terror: How ISIS is using hashtags for propaganda)

But on this day, Indonesians decided to fight back using social media.

“We are not afraid.” – Rappler.com