‘We are not safe’: Netizens threaten to close bank accounts for Duterte 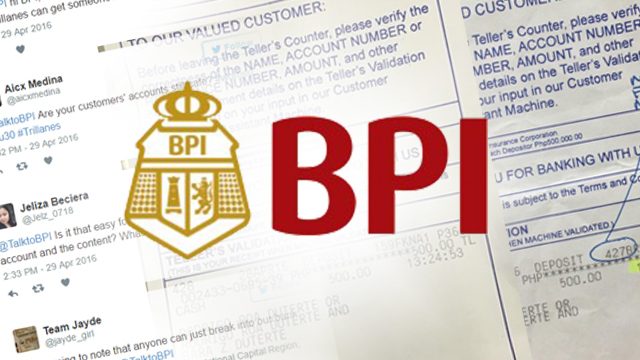 Facebook Twitter Copy URL
Copied
(UPDATED) BPI says its 'internal investigation reveals there has been no such breach.' It adds that it is 'committed to protecting client information and preserving the trust bestowed on us by our clients all these years.'

Vice Presidential candidate Senator Antonio Trillanes IV accused Duterte of hiding P211 million in a Bank of the Philippine Islands (BPI) branch on Wednesday, April 27. The discussion around the controversy grew on social media less than two weeks before the May 9 national elections. (READ: Trillanes to Duterte: Stop doing a Binay, sign waiver).

A post by journalist Ellen Tordesillas showed a photo of a bank receipt from BPI exposing the account Duterte and his daughter Sara. (READ: Alleged Duterte bank accounts don’t match his SALNs) The post has been shared almost 10 thousand times on Facebook, as of writing:

‘We are not safe with BPI’

Several netizens – who seem to be mostly supporters of the ‘iron fist’ candidate – took to microblogging site Twitter to question the safety of their own personal accounts on BPI.

@TalktoBPI hi BPI, how safe are our bank account's privacy with you? If Trillanes can get someone's bank info just like that..

While others worried about the safety of their accounts, some encouraged others to close their BPI accounts and investments.

A post shared to the ‘Friends of Rodrigo Duterte’ Facebook group by netizen Rosani Masau was shared over 18 thousand times, as of writing. Some went ahead to withdraw their deposits and close their accounts in protest.

Same here.. we are terminating our savings and investment… nakakatakot ang @TalktoBPI nagpapagamit.. no security https://t.co/zqke1RaMXz

Some simply destroyed their cards as a sign of protest against the bank’s silence on the issue.

Others tweeted BPI to question why it was so easy for Trillanes to get information on a private account.

@TalktoBPI Is it that easy for a senator to get records of our account and the content? What is happening here?

It's alarming to note that anyone can just break into our bank account information. @TalktoBPI

@TalktoBPI you should release an official statement regarding sen. Trillanes' claim. Does it mean anyone can view my account w/o court ordr?

@TalktoBPI still waiting for a statement from you. You know what I'm talking about.

@TalktoBPI Guys come on, only deafening silence? that's it?

While this was ongoing, @talktobpi was business as usual – replying to account holders who were experiencing technical difficulties with their online and mobile banking services.

@reypeace For the meantime, please access BPI Express Online for your transactions. Thank you!

In a statement, BPI responded by saying “Our internal investigation reveals that there has been no such breach. BPI continues to have one of the most highly regarded data protection practices in the industry, and we are committed to protecting client information and preserving the trust bestowed on us by our clients all these years.” (READ: BPI speaks up on Duterte controversy)

In the midst of the controversy, some also expressed their trust and support for the bank.

I hope @TalktoBPI did not violate the bank secrecy Law to @ItsRodyDuterte issue. I still trust you @TalktoBPI

say what you want about BPI. efficient pa rin yung online banking system nila. so no, i will not close my account.

Roxas also showed to media a notarized waiver, giving the Ombudsman of the Philippines access to documents concerning his own assets, liabilities, and business ties “for the duration of [his] candidacy.” (READ: Roxas slams Duterte for ‘lying’ about BPI account) Word wars from supporters of the two rival candidates reached Twitter. Followers of Duterte defend for their candidate, while followers of Roxas encouraged them to switch sides.

On the other hand, Senator Grace Poe challenged Duterte to disprove the allegations that he has a P211 million secret bank account (READ: Poe to Duterte: Why blame me? Disprove bank account).

Duterte instructed his lawyer to open his BPI – Julia Vargas branch account in front of Trillanes on Monday, May 2.

As of writing, Duterte continued to soar on surveys. With less than two weeks away to the elections, is this a controversy his candidacy can survive? (READ: Duterte survives ‘rape comment,’ tops Poll Asia poll)

What are your thoughts on this issue? Let us know in the comments section below or write on X. – Rappler.com