How did the presidential and VP candidates fare on social media? MANILA, Philippines – The election circus is always interesting to watch. It’s a time of alliances and rivals, both old and new, and an event that’s been said to be dominated by guns, goons, and gold.

The 2016 presidential elections brought a new battleground to be won for candidates vying for the highest posts in the land: social media.

Apart from fortifying and expanding their bailiwicks and fighting for TV airtime, candidates now have to establish a voice on a new platform where much of the conversation influences users and voters.

Let’s take a look at the campaign season and election day with data from Facebook and Twitter.

With 22 million people engaged in conversations and 268 million interactions, the Philippine election is the most engaged among Asia-Pacific elections to date. According to Facebook, Rodrigo Duterte was discussed in 71% of conversations about the elections. Mar Roxas followed with 52% of the conversations, and Grace Poe with 46%. The total of the figures exceeded 100% because some conversations mention more than just one candidate at the same time.

Strangely enough, Miriam Defensor Santiago, the candidate with the most followers on social media ranked the lowest at 24%.

Trillanes, who challenged poll front-runner Rodrigo Duterte to open his bank accounts, displaced Honasan in the rankings for most discussed presidential candidates from January 8 to May 7. However that wasn’t enough to retain Trillanes in the overall list, from November 20 to May 7.

For issues, transparency was a hot topic, followed by the economy and education. 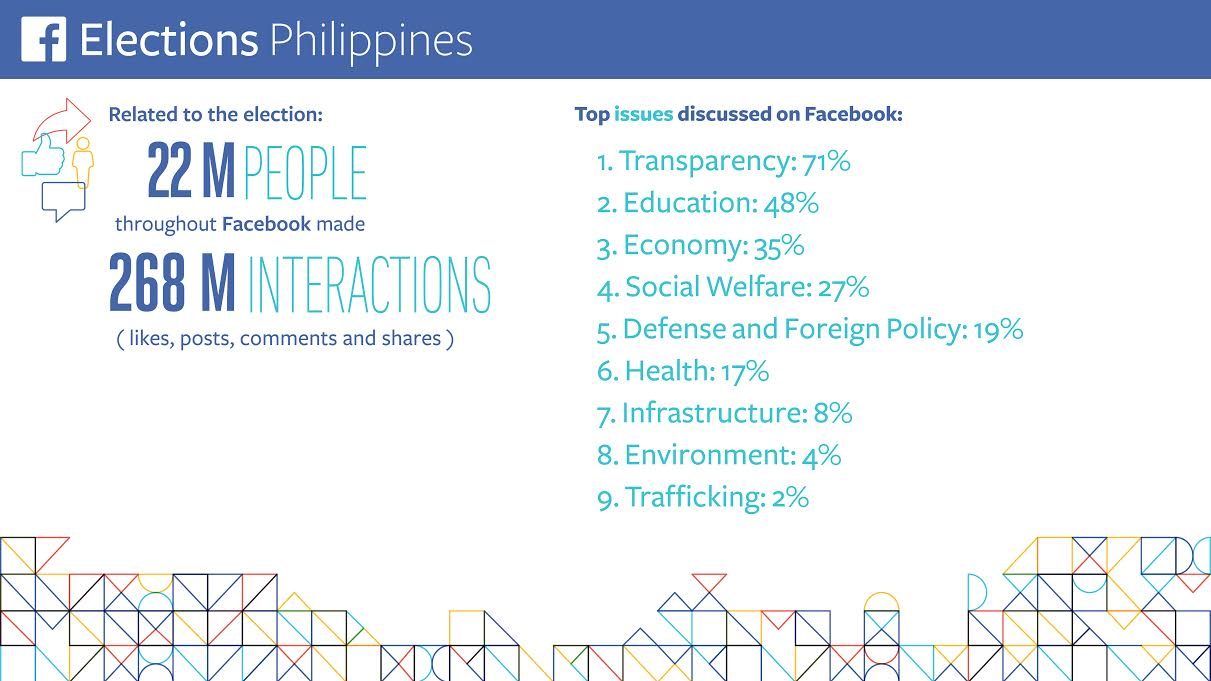 As for the most engaged users, the top demographic discussing the elections were women. Females aged 18-24 and 25-34 were the users holding the most conversations about the elections on Facebook, while Duterte bailiwicks Davao del Sur and Davao del Norte were the provinces that discussed the elections the most.

On election day Duterte dominated the conversation as usual, but there was a spike in conversations about Grace Poe as of 12 midnight shortly after she conceded. For the vice presidential candidates, Leni Robredo and Bongbong Marcos Jr were just as neck and neck as they are in the unofficial results as of 10:00 pm of May 9, but conversations about Robredo skyrocketed as many supporters held a vigil, watching results come in and waiting for her to take the lead. Election day was huge for Twitter users generating a total of 4 million tweets. Conversation picked up and peaked around 10:30 in the morning. It was around this time that Comelec spokesperson James Jimenez posted a tweet referring to the viral photo of teen stars Kathryn Bernardo and Daniel Padilla with their ballots.

As expected people were tweeting messages of support for their chosen candidates as well as photos of their inked fingers.

The conversation slowed down as the day went on and picked up again around 6:30 pm, roughly the same time Rappler’s results page went live. People tweeted what they thought of the results as they came in.

A chart from Twitter displaying the share of conversation by the candidates over time shows a surge in tweets about Binay in the morning, which eventually slowed down between 9-10 am. Meanwhile, tweets about Santiago picked up and dominated most of the conversation from 9 am to 3 pm. Both candidates had trending hashtags that morning. By 5-6 pm, conversations about all the candidates peaked as the results rolled in.

The heat of the already-divisive campaign is stronger than ever with social media amplifying the best and the worst among its users. On the one hand, we see an engaged electorate with discussions on politics and policy reaching an even wider audience than before, and on the other, it’s become an avenue for misinformation, misquotes, and memes, blurring the lines between fact and fiction.

Even before the elections, the Philippines has been known for establishing powerful groups of supporters on social media. An example would be the strong fandom culture surrounding “global phenomenon” AlDub characterized by its very vocal and loyal group of supporters.

This season we see that effect replicated with supporters rallying and campaigning heavily for their candidates on social media. From monitoring Rappler’s social media platforms we’ve observed that the most passionate of them all are Duterte supporters who have been outspoken on social media – sometimes taking their protectiveness of their chosen candidate a little too far.

From the Facebook data above, we see how Santiago, the presidential candidate with the most followers, trails behind Duterte in terms of discussion despite being the most followed candidate on Facebook before and during the campaign. It appears that strong social media presence is not enough. Organic discussion and strong supporter-established communities will still dominate the conversation.

The level of engagement shows us that these platforms are good places to spark discussions and bring election issues to the forefront. Offline, Filipinos are also walking the talk as the Comelec reports that this year’s automated elections had a record-breaking 81% voter turnout.

This elections season we’ve seen a surge in discussions on our feeds about policy, legislators, and the kind of leaders we want.

Hopefully this exercise in civic engagement and political discourse doesn’t end when the new leaders are sworn in. We also hope the quality of the conversation improves as people learn to cut through the noise of viral videos and memes. – Rappler.com