Jun 5, 2016 5:30 PM PHT
Rappler.com
Facebook Twitter Copy URL
Copied
The Facebook page of the Economic Journalists Association of the Philippines (EJAP) is removed after the group posted a statement against President-elect Rodrigo Duterte 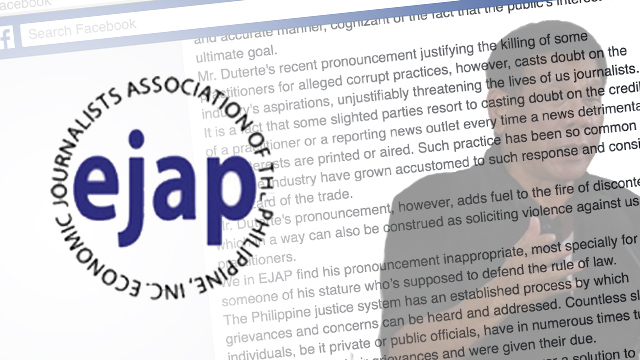 On Sunday, June 5, at least two journalists said that the Facebook page of the Economic Journalists Association of the Philippines (EJAP) was taken down after the group released a statement condemning Duterte’s remarks on media killings.

“We in EJAP find [Duterte’s] pronouncement inappropriate, most specially for someone of his stature who’s supposed to defend the rule of law,” the group said.

“Violence as a means of redress is never an option and would be a slap in the face of a democratic country like the Philippines that prides itself to be a society governed by the rule of law yet has a President who justifies killing sans due process.”

When asked in an earlier press conference about his plans to stop media killings in the Philippines, the president-elect had responded: “Just because you’re a journalist you are not exempted from assassination, if you’re a son of a bitch.”

This isn’t the first time Facebook has removed an anti-Duterte post. On June 1, it took down a post by TV5 anchor Ed Lingao, where he criticized Duterte’s plan to allow the late dictator Ferdinand Marcos to be buried at the Heroes’ Cemetery.

Lingao said another post – where he compiled the hate comments he got on his original post – was also deleted. He was also blocked from posting on his account for at least 24 hours.

Facebook has since lifted the ban on Lingao and reinstated his second post, which, the site explained, was deleted by accident.

Meanwhile, during the campaign period, Facebook blocked user Renee Juliene Karunungan for “violating community standards” after she posted about the threats she got from apparent Duterte supporters.

Karunungan received the threats after she declared that she was openly campaigning against Duterte. She later filed complaints against the social media users who harassed her online. – Rappler.com