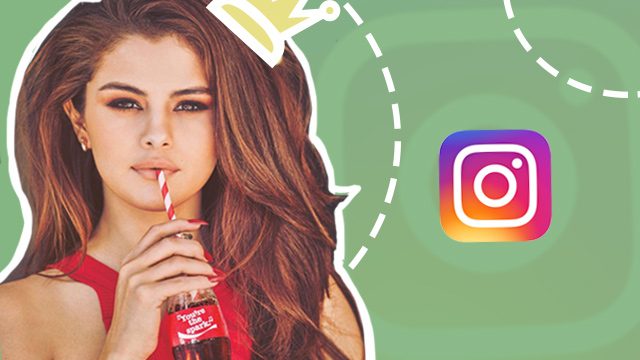 According to year-end data released to People Magazine, @selenagomez is the most followed celebrity on Instagram with 103 million followers. Her BFF, Taylor Swift (@taylorswift) came in 2nd with a little over 93 million.

Selena’s most popular post to date racked up over 5.9 million likes, dominating the list of this year’s top 10 most popular celebrity Instagram posts. On top of that, she took 8 out of the 10 spots, according to Glamour.

when your lyrics are on the bottle #ad

The other 2 spots on the top 10 list went to Cristiano Ronaldo.

I always dream to win this title

Finally got to meet this sweetheart -she owned it fully

It’s a love-filled year as well with the heart emoji and #love topping the list of most used emojis and hashtags on Instagram. And just in case you’re a fan of Instagram filters, Clarendon, Gingham, and Juno are this year’s top ones. We took photos of our tree in the Rappler headquarters this year and we can’t decide which filter to use. Help us pick!

Help us pick a filter? How about #Clarendon? Double tap if you like this one! According to @instagram, Clarendon, Gingham and Juno are this year's top filters. Let us know which one you like best!

Help us pick a filter? This one's #Gingham. Double tap to show it some love.  According to @instagram, Clarendon, Gingham and Juno are this year's top filters. Let us know which one you like best!

According to @instagram, Clarendon, Gingham and Juno are this year's top filters. We're stumped so we're trying all of them. This one is #Juno. Double tap if you love it! What's your favorite IG filter?

Let us know what you think in the comments or better yet, tag us in your photos! We’d love to see the filters that made your year. – Rappler.com