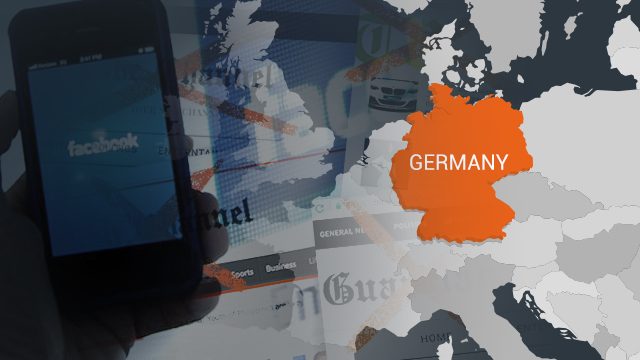 MANILA, Philippines – Germany plans to crack down hard on fake news and the social media platforms they are found on.

Volker Kauder, the leader of Germany’s Christian Democratic Union (CDU), the coalition of Angela Merkel, announced they would introduce a bill next year to target the problem that has especially plagued Facebook in recent months.

The bill would require Facebook and other social media platforms to set up local firms to respond to complaints. Beyond that, a fine of up to €500,000 ($519,925) would also be introduced for each fake news post that isn’t taken down from the website immediately.

The Next Web added it would likely apply to all social media, though special attention was paid to Facebook in comments made by Social Democratic Party chairman Thomas Opperman to Der Spiegel.

Said Opperman, “Facebook did not avail itself of the opportunity to regulate the issue of complaint management itself.” He added that market-dominating platforms such as Facebook will be legally required to build a legal protection office in germany that would operate nonstop to curb fake news as it comes.

“If, after appropriate examination, Facebook does not delete the offending message within 24 hours, it should expect individual fines of up to 500,000 euros. Furthermore, at the request of the people concerned, there should be some form of remedy or correction within the same range of value.”

This bill would also cover posts with libelous statements or hate speech, things which Germany has long had strict laws on.

CDU’s proposed bill would include requiring companies to set up channels for complaints, publishing the number of complaints they receive, and to hire ombudsmen to handle deletions.

According to analysis in November by BuzzFeed News, fake election news was more viral than real stories on Facebook during the final months of the US presidential campaign.

The Philippine Facebook community has also seen its fair share of fake news stories this past year. Should hardline laws similar to what Germany is proposing take government precedent in 2017? (READ: Fake accounts, manufactured reality on social media)

With Germany’s 2017 election right around the corner, voters and politicians alike are united in their stand against spreading fake news on social media.

“Facebook is earning an awful lot of money with fake news,” said Heiko Maas, a Social Democrat in the CDU.

He added, “A company that earns billions from the internet also has a social responsibility. Prosecutable defamation must be deleted immediately, once reported. It needs to be made easier for users to report fake news.”

There are logistical issues to consider when it comes to a full-time monitoring platform for fake news, however. In addition to checking the posts of 1.75 billion Facebook users just to find offending content, the fine itself appears to be unprecedented, not only in scale, but also in potential bluster.

As Facebook is US-based, there’s no clear way for Germany to collect the fines, unless Germany wanted to shut down Facebook in the country.

Facebook may even choose to do that itself, taking what might be a small punch to its userbase for ease of operation. Germany’s Facebook userbase numbers 36.8 million, ranking it below the Philippines and above the United Kingdom at eighth place in total users by country, according to Statista.

Facebook has recently been criticized for its slow movement in obstructing the spread of fake news which has caused much fear and uproar on its website and off line. (READ: Zuckerberg sure fake news on Facebook didn’t sway US election)

In light of the complaints hurled at their company, Facebook has recently announced the launch of tools users can access to aid in the fight against the spread of hoaxes and fake news.

Tell us your thoughts on X! – Rappler.com