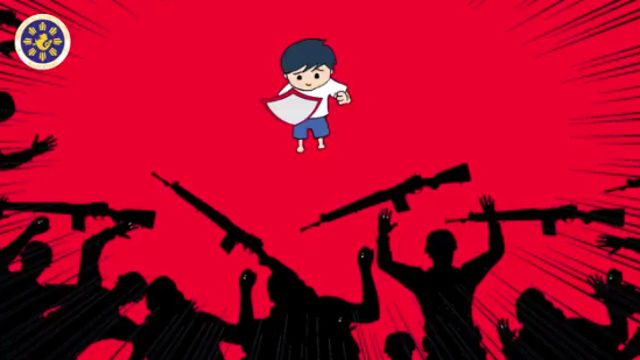 MANILA, Philippines (3rd UPDATE) – Malacañang has launched an information campaign via social media to justify the declaration of martial law. Its latest initiative: an animation that showed martial law as the shield that would protect a young man from violent extremists.

The 37-second animation made the rounds of Twitter and Facebook on Wednesday afternoon, May 31, but was eventually taken down later in the evening following online backlash.

The narrator of the video said: “In the free society, there are groups who don’t want to give independence. They are adamant on detaining peaceful spirits. They are distressing feelings with fears. Let us not allow them to terrify us. We will all fight in unity. Martial law should be the rule of the land. Martial law, now.”

The video has since been shared online via mirrors since the takedown.

The new video came after the Palace released a “Fast Facts” video explaining how martial law works, and how long it lasts. PTV, the government station, also aired a program on May 26 attempting to explain martial law and how it would help fight extremism.

Catch the live telecast of EXTREMISM AND MARTIAL LAW: A Special Forum, 7:30PM tonight, May 26, via https://t.co/8fQ2K3rbdz. pic.twitter.com/NLUnjcVntC

The martial law fast facts video was posted on Facebook on May 27.

President Rodrigo Duterte declared martial law in Mindanao on May 23, and said it would be no different from Marcos’ time.

He also warned he would extend its coverage over the entire country if the threat of terrorism persists. – Rappler.com