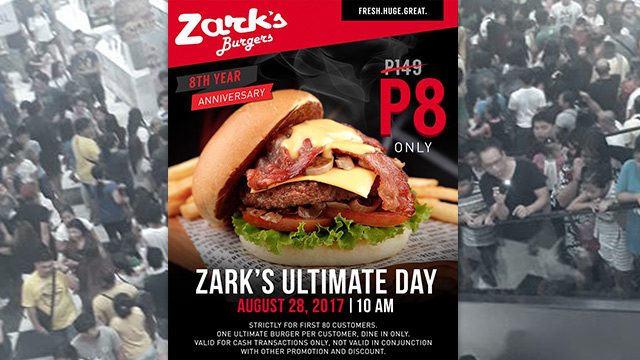 MANILA, Philippines – A local food chain’s anniversary promo sent customers stampeding in some malls across the country for an P8 burger fix on Monday, August 28.

To celebrate its 8th year anniversary, burger chain Zark’s Burgers sold their Ultimate Burger for only P8 each – from the original P145 – to the first 80 customers in all their branches. (READ: Burger King has own ‘whoppercoin’ cryptocurrency in Russia)

The announcement posted on Friday, August 25, quickly went viral, getting over 3,000 shares on Facebook.

People lined up early outside different malls on D-day, and hungry mobs rushed in as soon as doors opened.

Photos and videos of the mobs quickly went viral on Facebook.

Some customers, however, were not happy about the promo’s outcome, saying that some were hurt during the stampede.

Zark’s Burgers thanked their customers for the “mammoth response” to their promo. In the same post, Zark’s apologized for “the inconvenience experienced by patrons and other mall shoppers unintentionally brought about by this celebration.”

Were you able to see the burger rush earlier? Tell us about it in the comments! – Rappler.com