What you need to know about #Cocoygate

Oct 13, 2017 11:06 AM PHT
Paige Occeñola
Facebook Twitter Copy URL
Copied
During the Senate hearing on fake news, Cocoy Dayao is named as the man behind several sites critical of the administration 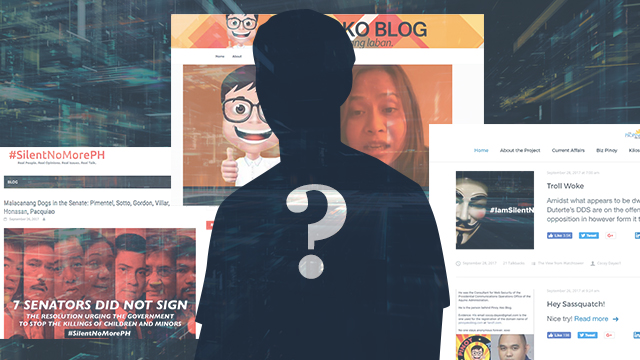 In an entry that dubbed them “Malacanang Dogs in the Senate”, the blog accused them of not signing Resolution 516, the resolution against the killings of minors. In the same entry, the blog also called Sotto a “rapist, plagiarist, and bigot”.

The following day, September 27, Sotto delivered a privilege speech to call for an investigation into the “fake news” which was referred to the committee on public information, under Poe. (READ: Senators bicker over ‘exclusion’ from resolution vs killing of minors)

“Cocoygate” was a play on the words “Cocoy” – nickname of Edward Angelo Dayao, the person alleged to be a web administrator of a number of anti-Duterte accounts – and “Watergate”, a major political scandal that rocked the Nixon administration in the 1970s.

In his response to Sotto’s question about his report, Nieto said he discovered that websites such as “Silent No More” and “Madame Claudia” served ads from the same account.

According to Nieto, they were looking into the identity of the person behind Pinoy Ako Blog, another blog critical of the Duterte administration, when they stumbled upon Edward Angelo Dayao’s details. Dayao was listed as the registrant:

Edward Angelo Dayao, also known as Coco Dayao, blogs on The ProPinoy Project (ProPinoy.net). Dayao’s bio says he is “the Chief Technology Officer of Lab Rats Technica, a Digital Consulting company that specializes in DevOps, iOS, and Web Apps, E-Commerce sites, Cybersecurity and Social Media consulting.” The bio also describes him as the managing director and editor-in-chief of the ProPinoy Project.

Google’s AdSense makes it possible for users to monetize their site through ads and in order to activate this, Google requires users to provide personal details such as their names, postal address, and a valid phone number.

What they were able to establish is that Dayao plays a web administrator role but he does not necessarily handle or populate these sites with content. According to Nieto, Dayao operates around 20 or more of the sites.

Cocoy Dayao was invited to the same hearing but he did not appear. As a result, Senate committee chair Grace Poe said Dayao will be issued a subpoena.

As for the allegations that Dayao was a consultant of the former administration’s PCOO, former Communications Secretary Herminio Coloma Jr denied that he (Dayao) was one.

Dayao’s identity was revealed as early as September 26 by Sass Rogando Sasot, a vocal supporter of President Rodrigo Duterte. These earlier accusations pinned him as the owner of Pinoy Ako Blog. 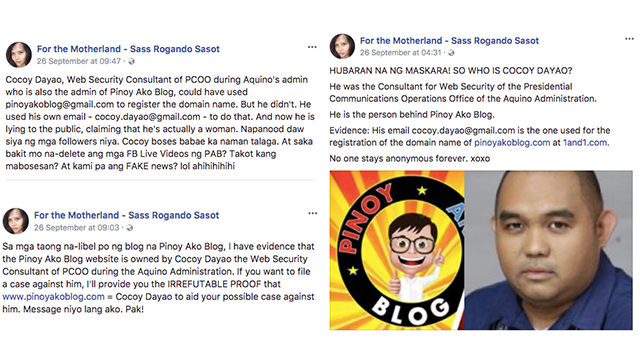 Dayao responded to this in an entry on The Propinoy Project denying that he was Pinoy Ako Blog. Pinoy Ako Blog also clarified that Dayao was a webmaster for the site but was not behind its contents. 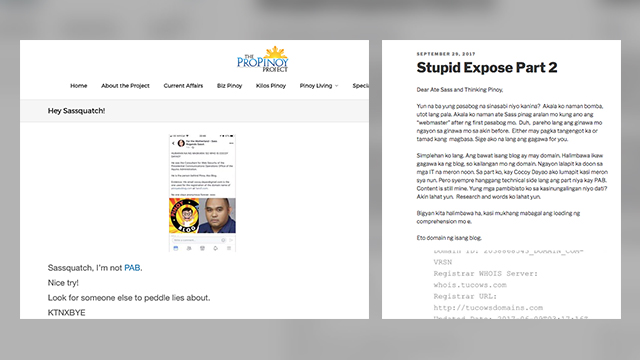 In a blog entry dated September 28, Dayao said he has been on the receiving end of attacks from pro-Duterte supporters after being named as the person behind Pinoy Ako Blog:

“Not to belittle the thousands upon thousands dead in Duterte’s drug war, what followed next was digital Tokhang. Post after post of character assassination. Phone calls. Texts. Email bombing. Threats. Ridicule. The trolls were obvious in their monotonic comments. There were live ones, obviously. They’re the diehards, and were persuaded by Sassquatch’s post and carried over by the mob. The attacks were coordinated.”

“Better is always good. Death in the streets. Businesses closing down. Prices of goods skyrocketing. Politicians unleashing their inner imbeciles. Government officials as purveyor of fake news. When you oppose you are hunted down. Is this better or worst?”

In today’s vitriolic social media environment where journalists are threatened and critics of the administration are intimidated or shut down, there’s no doubt that high-profile pro-Duterte bloggers are powerful platforms, especially when several of them were legitimized by the current administration. It doesn’t take much before anyone identified by these platforms is suddenly swarmed.

Since then, Nieto and Sassot have posted several posts and blog entries about what they have dubbed #CocoyGate. They have also linked Dayao not just to the sites, but to Liberal Party Senators Francis “Kiko” Pangilinan and Paolo Benigno “Bam” Aquino IV as well.

Long-time bloggers and digital advocates such as Tonyo Cruz and Jane Uymatiao‏ have expressed their concern about the accusations hurled at Cocoy Dayao online, questioning if there is room for dissent and criticism.

Catching up on social media. Really appalling, all this mud hurled at @cocoy. Will this be the new normal for critics of the gov’t?

During the hearing, Nieto said that it was originally the hunt for the person behind Pinoy Ako Blog, whom they accuse of libeling them, that led them to Dayao.

And if their recent posts are to be believed, it looks like they have found their original target. (READ: Who’s behind Pinoy Ako Blog?) – Rappler.com