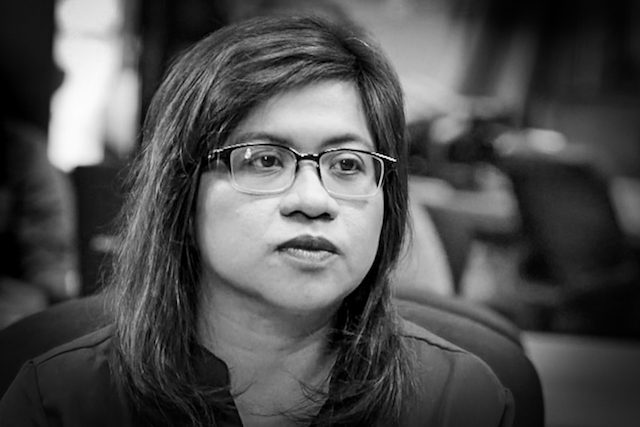 Despite being forced to come forward and the exposure of her identity and personal photos online, Laurio says in an exclusive interview with Rappler that it is business as usual for her and her blog – she will still be blogging with her usual sense of humor that her blog has been known for. (READ: Who’s behind Pinoy Ako Blog?)

Laurio’s journey into blogging started for more or less the same reasons she came forward now: she was threatened and harassed for speaking up.

In September last year, a personal post of hers was picked up and went viral. According to Laurio, her post was shared over 29,000 times and she eventually found herself bashed and threatened online.

From a conservative following of 150 followers, Laurio said her page was constantly reported on Facebook and taken down when they reached around 2,000 followers. She started the blog to protect her content even when the Facebook page gets taken down. Now, with over 90,000 followers on Facebook, Laurio said she never thought it would reach the scale it has reached now.

“Hindi ko ine-expect na people will like it, kasi sabi ko nga hindi, minsan nga mali-mali pa ‘yung grammar ko at spelling. Kasi I’m not a writer. Simpleng tao lang ako. Doon nagsimula si Pinoy Ako Blog.” (I did not expect that people will like it. As I said, I sometimes make grammar and spelling mistakes because I’m not a writer. I’m just a simple person. That’s how Pinoy Ako Blog started.)

She doesn’t consider the people who rally around her as her supporters. Rather, for Laurio, each of them is Pinoy Ako Blog: “Bawat sa isa sa kanila si PAB.”

Laurio said she explored the possibility of coming forward in the future but her doxxing was not the catalyst that she expected.

(I did not expect this situation where my and my family’s security would be compromised. I could have come out in a normal way, not like this where I need to come forward to protect myself and my family.)

Doxxing is the practice of exposing someone’s personal details and identity online. This practice is a gray area especially since it’s a powerful tool for harassment where attackers are looking to exact punishment or revenge.

In the case of Laurio, her full name was circulated online along with old pictures, one of them was her in a bikini dated 7 years ago. Her photos became an easy target for vitriol.

Apart from personal attacks, she was again on the receiving end of threats such as “Pag nakasalubong kita, patay ka sa ‘kin.” (If I run into you, you’re dead.)

Laurio says she has had enough, that is why she felt like she needed to come forward.

On #Cocoygate and the LP

Several of Pinoy Ako Blog’s detractors have hit her for her content, saying some of her posts were libelous, linking her webmaster Cocoy Dayao to other anti-Duterte sites, and accusing her of being a Liberal Party lapdog.

Laurio refuted these claims. Laurio said Cocoy Dayao is a friend she made on Twitter and clarified that Dayao is just the webmaster of her blog and all content is hers.

(He’s the webmaster. He’s the one who’s taking care of my blog because I am not an IT-savvy person. I didn’t know you needed a domain. I asked for his help, but other than that, Cocoy did nothing more. All the content in my blog, that’s me. I felt bad for him because he was the first to get bashed.)

Laurio also denied knowing the people behind the blogs critical of the Duterte administration such as Silent No More PH and Madam Claudia. She said their interactions are limited to Twitter but they haven’t met in person.

Laurio said that if people think what she is saying is libelous, they are free to file a case now that she is out. As for the criticism of her “admiration” for the Liberal Party, Laurio said that even if the administration changes, Pinoy Ako Blog will still be there to call them out if they do something wrong.

Laurio also dismissed accusations that she is being paid to write her content, saying her family comes from humble beginnings and she manages to get by with help from generous family and friends.

Even the legal support extended to her by former solicitor general Florin Hilbay and Alyansa ng mga Abogado Para sa Bayan (ALAB) is pro-bono because, she said, she does not have the means to pursue the cases.

On why she blogs

Despite the challenges that come with her platform and limited resources, Laurio thinks it’s important to speak up.

(Social media plays a vital role in molding the kind of society we have. So many things are happening, it’s hard to close your eyes or play deaf. You see a child hit by a stray bullet, you see on TV a mother crying, it hurts not to say anything. Instead of me just keeping it, I just blog it.)

As for accusations of cowardice because she chose to be anonymous, Laurio said being named is not the barometer for courage.

(That’s not how courage is measured. Courage is when you are afraid but you still fight. When you know you’re about to hit a big wall but you think about the welfare of many, that’s courage.)

At the end of the day, Laurio just has simple dreams: to finish law school, be a lawyer, and work for the Public Attorney’s Office. But for now, this dream is put on hold because she has a bigger battle to face.

(I realized that you need to be brave. This is not about me, this is about what I’m fighting for: truthful information, and hopefully change. Because if I think about myself, I would have said a long time ago, “I won’t blog anymore.” But this is not about me at all. It is beyond me.) – Rappler.com