From Korean idol group to Duterte Supporters on Facebook? Facebook Twitter Copy URL
Copied
A fan group for a South Korean actor is renamed 'President Duterte Supporters'. But there might be more to the story.

The red flag was raised by a Facebook post by Karla Obispo after a group that she is a part of, originally intended for fans of South Korean actor Kim Soo-hyun, was suddenly changed to “President Duterte Supporters”.

The fan group had over 13,000 members and was created 4 years ago. In Obispo’s post, the administrator responsible for the name change was a certain “Donnabelle Gamboa Pascual”. In a screenshot posted by Obispo, “Donnabelle” said she thought the group was no longer active which is why she decided to change its name.

A separate screenshot by Obispo showed a comment by “President Duterte Supporters” saying the page was bought and that the original name would be restored when the group becomes active.

The name of the group was changed to “Davao CT” then eventually restored to Kim Soo Hyun.

Who is ‘Donnabelle Gamboa Pascual’? The profile has been taken down, as well as her posts in these groups but the data was stored in social media monitoring tool Crowdtangle.

A commenter on Obispo’s post was able to take a screencap of some of Donabelle’s posts which matched the posts of the “Donabelle Pascual” in the database we used. 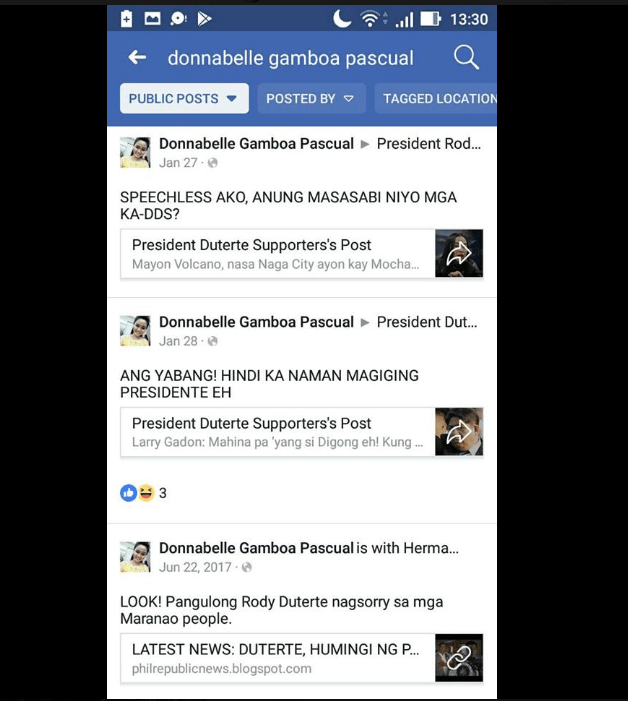 Here are some of Donabelle’s posts in these groups:

The “Donabelle” we found also appeared to cross-post content across several groups with the same caption. Data we gathered also showed that “Donabelle Gamboa Pascual” started posting around July 2017. Her activity peaked in August with 123 posts in various groups, and September with 166.

She had also posted 307 times in various groups linking to a website called “Philippine Republic News” which carries fake stories such as Oprah’s support for President Duterte. Organic or part of a machinery?

A recent study by media scholars Jonathan Corpus Ong and Jason Vincent A. Cabañes, titled “Architects of Networked Disinformation”, found that fake account operators are part of a bigger architecture which aims to amplify political messages.

According to their study, “community-level fake account operators” are subcontracted and tasked with signal-boosting messages. In order to do this, these operators infiltrate community groups and news pages, with a set quota of posts and comments.

With her Facebook page taken down it’s now difficult to get to the bottom of her identity and determine if the account was seeded or if it was real.

While it’s suspicious that she changed the name of an unaffiliated group and shows a pattern of troll-like behavior by spamming groups, it’s also possible that she could just be a very enthusiastic Duterte supporter who reads and supports a fake news site.

That’s where the danger lies, in the age of social media and propaganda, how do you figure out what’s real from what’s not? – Rappler.com