MANILA, Philippines – On the annual celebration of Pi Day and on Albert Einstein’s birthday, a renowned British physicist died.

Stephen Hawking’s death may have made the universe a little bit dimmer but as the whole world celebrates his remarkable life, netizens shared words of praise for his valuable contributions to science. (READ: Stephen Hawking: A brief history of genius)

As of writing, Stephen Hawking tops Twitter’s trending topics both in the Philippines and worldwide. 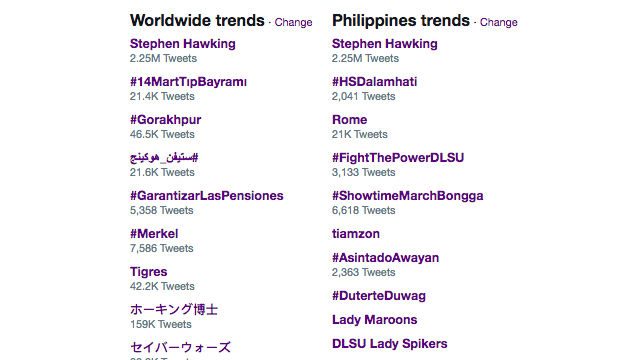 Academics, politicians and celebrities took to Twitter to pay their respect to the scientist. Here are some reactions on Hawking’s death:

Remembering Stephen Hawking, a renowned physicist and ambassador of science. His theories unlocked a universe of possibilities that we & the world are exploring. May you keep flying like superman in microgravity, as you said to astronauts on @Space_Station in 2014 pic.twitter.com/FeR4fd2zZ5

Genius is so fine and rare. Goodbye Professor Hawking. You inspired and taught us all. pic.twitter.com/9Drdnv2eEe

A star just went out in the cosmos. We have lost an amazing human being. Stephen Hawking fought and tamed the cosmos bravely for 76 years and taught us all something importantabout what it truly means to celebrate about being human. I will miss him.

Professor Stephen Hawking was an outstanding scientist and academic. His grit and tenacity inspired people all over the world. His demise is anguishing. Professor Hawking’s pioneering work made our world a better place. May his soul rest in peace.

The world has lost a beautiful mind and a brilliant scientist. RIP Stephen Hawking

there’s a big black hole in my heart hours before Pi day. Rest In Peace @Steven_Hawking… See you in the next

I just heard about Stephen Hawking's passing. He was both a genius and my favorite Simpsons character. We'll miss you, buddy.

Netizens also noted the glaring coincidence that Hawking passed away on Pi Day – the annual celebration of the mathematical constant π.

Stephen Hawking has passed away on Pi Day? Coincidence?

Stephen Hawking passed on Pi day. It's fitting since his legacy will go on forever, too. pic.twitter.com/qtmGu4NIeT

Here are more tweets about his death: