Apr 12, 2018 10:00 AM PHT
Bonz Magsambol
Facebook Twitter Copy URL
Copied
'Partnering with third-party fact-checking organizations is one of the ways we hope to better identify and reduce the reach of false news that people share on our platform,' says Clair Deevy, Facebook Director for Community Affairs for Asia Pacific 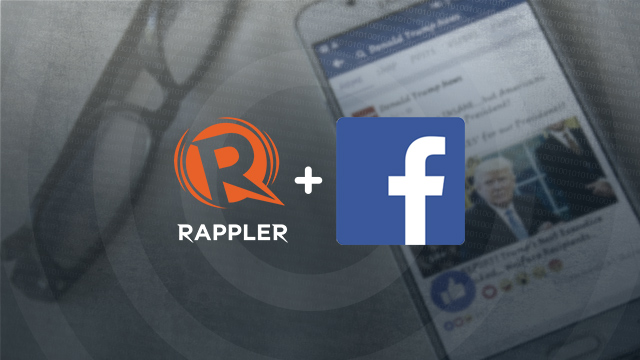 MANILA, Philippines – Facebook on Thursday, April 12, announced its partnership with Rappler and Vera Files for a third-party fact-checking program in the Philippines which aims to prevent false news from spreading on the social media platform.

“Partnering with third-party fact-checking organizations is one of the ways we hope to better identify and reduce the reach of false news that people share on our platform,” said Clair Deevy, Facebook Director for Community Affairs for Asia Pacific.

Rappler CEO Maria Ressa hailed the partnership with Facebook. “It’s what journalists do, and we’re happy to work with Facebook to help create a safe and sane public space for critical thinking and debate,” Ressa said.

“A shared version of reality is critical to any functioning democracy. Exposing lies and the networks which share them is a first step in strengthening civic engagement,” added Ressa.

The fact-checking program is in line with a 3-part framework to improve the quality and authenticity of stories in people’s news feeds.

“It is important that decisions we make in our daily lives are based on correct information. Falsehoods cloud the mind and create confusion. Our aim with VERA Files’ fact-checking partnership with Facebook is to reduce falsehoods on social media and help create an informed citizenry — a vital component of democracy,” said Ellen Tordesillas, President of VERA Files.

Aside from the social media giant’s Community Standards, which regulate content shared on the platform, the program will also limit the distribution of stories that undermine Facebook’s authenticity. It will also provide users with more context on the stories they see.

“This added feature will help flag users to think critically about stories they see on their News Feeds,” added Deevy.

According to Deevy, the partnership is an important step in instilling digital literacy among Filipino Facebook users.

Aside from being able to flag potential false news stories, people will also be informed if a story they shared on Facebook has been rated fake.

“With our shared goal of keeping the online space free from false information, we want to help Filipinos be more discerning of news they read online, and make them aware of the real life consequences of spreading falsehoods,” said Deevy.

Deevy said that there’s no silver bullet solution in fighting fake news but they are willing to expand their digital literacy programs in the Philippines to provide Filipinos the skills they need in identifying accurate news.

“We know more work needs to be done and we are committed to fighting false news on Facebook,” said Deevy.

Rappler and Vera Files will review flagged stories. These will be placed lower in the News Feed and will be less visible.

People who will try share a fake story will receive a notification that the post has been determined by the fact checker to be false. (WATCH: 6 ways to spot a fake news article)

Fact checkers will also write stories providing context and debunking the falsehood of the claim which will appear below the original post with the label “Related Articles.”

For pages that frequently share false stories, their post distribution will be reduced and their ability to monetize and advertise will likely be removed.

In the Philippines, Rappler has documented the disinformation and misinformation online which shape public opinion and influence critical decisions. – Rappler.com