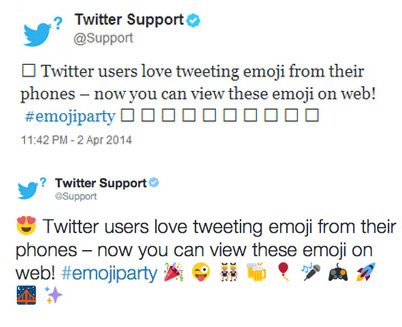 MANILA, Philippines – Desktop users can now say goodbye to those hollow square boxes that appear when unsupported characters are tweeted.

Twitter on the Web now supports emoji – those smileys and ideograms initially used in electronic messages in Japan and now a global trend, following adaption by Windows, iOS and Android smartphone operating systems.

The announcement came via a tweet from Twitter Support on Wednesday, April 2: “Twitter users love tweeting emoji from their phones – now you can view these emoji on web! #emojiparty.”

Twitter designed its own emoji character set that looks flatter compared to the 3D-looking emoji on iOS, but prettier than their stock Android counterparts.

Embedded tweets, however, remain unsupported, so if you’re looking at a tweet embedded on a website, you will still need to click through and view the tweet on Twitter.com to see the emoji in all their cartoony glory.

Since emoji is slowly becoming a pop culture trend, there has been a recent push for more diverse characters.

Back in 2012, pop star Miley Cyrus tweeted, “RT if you think there needs to be an #emojiethnicityupdate.” Last March, responding to an email from MTV Act, an Apple representative said that Apple has “been working with the Unicode Consortium to update the standard and come up with a more diverse emoji character set.”

Last month Mauritius based app developer Oju Africa released an app called oju emoticon, which is a set of 15 black emoji. In the app’s description on the Google Play Store, it says the “app (was) created to celebrate our diversity…oju is a voice that supports all of our diverse cultures and brings to life our emotions, passions and our warmth. An African celebration.”

What do you think of the emoji support? Are you excited to finally see emojis on your feed? And do you think we need more diverse emoji characters? — Rappler.com