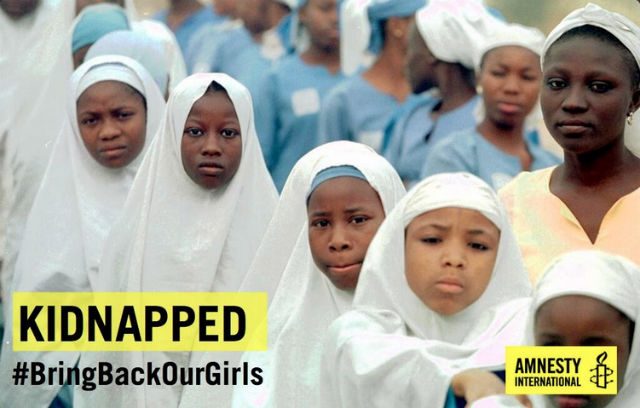 MANILA, Philippines – Regardless of race, color, and creed, netizens around the world are calling for action after Islamist militants kidnapped more than 200 Nigerian schoolgirls.

Abubakar Shekau, leader of the Boko Haram group, claimed responsibility for the kidnapping of young female students in a 57-minute video obtained by Agence France-Presse on Monday, May 5, or 3 weeks after the mass abduction. (READ: Boko Haram claims Nigeria schoolgirls abduction in new video)

In the video, Abubakar Shekau threatens to sell the schoolgirls in the market and marry them. The leader of the extremist group also affirmed the end of Western education and said that young girls should get married instead of go to school.

On the night of April 14, armed members of Boko Haram attacked a boarding school in Chibok, in the northern state of Borno, and captured 287 students. They have since kidnapped 11 more girls. (READ: Boko Haram claims bomb in Nigeria’s capital)

While the fate of the captured young girls remains uncertain, United States senators are urging Washington to intervene. World leaders such as US President Barack Obama, celebrities like Angelina Jolie, and social media users stand as one and demand for common action: to bring back the girls to their homes.

What happened to the Nigerian girls is a case of gender inequality as well as violation of the rights of women and children. In your own ways, how can you spread awareness about these issues? Share them with us in the comments section below! – Alyssa Leong/Rappler.com

Alyssa Leong is a Rappler intern.