7 types of friendships everyone has 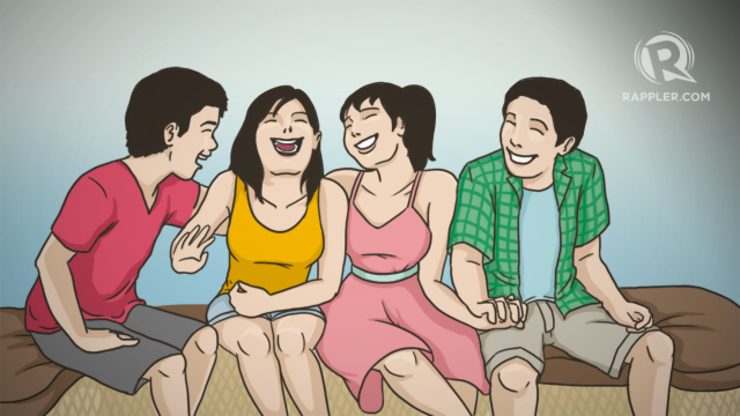 Facebook Twitter Copy URL
Copied
'We all have that one friend who...' From true friends to friendzone, social media users share the different friendships that they have

MANILA, Philippines – “Tell me who your friends are and I will tell you who you are.”

It’s the hard truth, but the people you choose to keep in your life do become the scale on which the world will judge you by. Whether uplifting or destructive, you choose the friends you keep.

To celebrate the International Day of Friendship, we asked our Facebook and Twitter followers to tell us what types of friendships they have in their lives. Here are the most common ones: The mother of all friendships, these are essential people who make the daily grind called life easier to survive. They just get you and always know exactly what to say or do to make you crack up, break down in tears, and even question your most well-analyzed life choices.

Your brother-from-another-mother, your soulmate, your best friend. The ones you’re sure will laugh when you trip, but who will also treat your wounds after they help you up.

No matter if they started off as that one person you swore to destroy or if you just clicked right off the bat, you know they have now become people you can’t see yourself without.

https://twitter.com/rapplerdotcom“>@rapplerdotcom a true friend is someone who will tell you the truth even if it hurts. Hey, they just met you and this is crazy, but now they have your number, so they’ll call you…ceaselessly.

These people make you realize that you do in fact have a sense of personal space and some boundaries. When they walk into the room, you can feel their eyes zone in on you and – as they make a bee-line straight to where you’re standing – you wonder why this person you’ve only known for an hour is acting like they know all your deepest secrets.

They make you feel like a bad person because all they clearly want is so desperately to be your friend, but there you are, unable to reciprocate. Don’t feel bad, though, because every group has one. If you’ve never met anyone like this…well…

https://twitter.com/rapplerdotcom“>@rapplerdotcom he/she will become suddenly close to you and if he/she got what he/she wants from you then you're not friends anymore.

https://twitter.com/rapplerdotcom“>@rapplerdotcom asks help from me but never bothers to ask if I'm busy or if I need help as well.

https://twitter.com/rapplerdotcom“>@rapplerdotcom feeling close friends are the best social climbers ever. they morph to another friend type which is called user-friendly ones We all tease our friends about treating us to a free meal and we’ve all been teased the same way. But there are a few people who would actually hand over their bill at the end of the meal.

User-friendly relationships come in many shapes and packages: please-help-me-with-my-homework, can-I-borrow-your-favorite-skirt-again, thanks-for-the-invite-what-time-are-you-picking-me-up, and all the old favorite lines that make you feel more like a mother-butler than a friend.

Why do we keep these people around? Maybe we’ve all got a little bit of a hero complex and it just feels good to be needed, maybe they’re smooth as heck, or maybe the feeling is just mutual.

https://twitter.com/rapplerdotcom“>@rapplerdotcom they will ask your help. After they get what they need/want, they will disappear, or lilitaw. Similar to what a palitaw is.

https://twitter.com/rapplerdotcom“>@rapplerdotcom A user usually comes to you if he/she needs something. Remember a true friend does not disappear in your darkest hours. These are the people who you met online because they stumbled upon your pathetic excuse for a blog and decided you were cool enough to talk to.

They usually share your sentiments about your favorite show, celebrity, or issue and have their own blog filled with like-minded gems that you both could talk about for hours and hours and hours.

You could see yourself being really close friends with these people and everything seems perfect. The only catch is that they live on the other side of the world.

@rapplerdotcom virtual friends fill in the gaps of "friendless" and alone moments in life…as long as wi-fi or data is around. If you’ve got a frenemy, you know that all those teen-angst dramas filled with backstabbing and plastic smiles are based on true stories.

These are the people you pretend to like for one reason or another but deep down you’re just waiting for them to cross a line so you can unleash the Kraken upon them and finally have the revenge you’ve been secretly plotting.

Of course, even if they do cross a line, you probably won’t blow up at them because you are the better person. Also because you just love to hate them so you keep them around.

“https://twitter.com/rapplerdotcom“>@rapplerdotcom: Got any 'frenemies'? How would you describe him/her? :)-  can't kill them, but can't live without them!

@rapplerdotcom frenemies are the two-sided friends you have. The best chameleons in the ecosystem. A seemingly innocent 3 am text appears, telling you to come over so you can hang out. But you know nothing innocent will be happening once you get there.

These are people with whom you have a special relationship. No, not in the way where you love them so much you want to shout it out from the rooftops. We’re talking the kind where you lust after them so much you’ll be screaming at the start of your climax.

For all sorts of reasons, despite your obvious sexual chemistry, both of you agree that you can’t head into a real relationship. You’re just not each other’s priority. You have your fun but there are no strings attached…after all, you are just friends.

https://twitter.com/rapplerdotcom“>@rapplerdotcom Pops out of nowhere asking and being extra nice and friendly…then boom, asks for a favor, and disappears once you've done it Ah, the friendzone. Home to a significant amount of the world’s bitter and forever alone population.

You finally muster up the guts to tell THE ONE how much you’ve always loved them and want to take your relationship to the next level but their reply ranges from a “k” to a “I’m so so sorry. I truly do love you but not in the same way. You’ve always been like a friend to me. I hope this doesn’t ruin anything. I’d hate to lose a friend like you.”

Nobody is quite sure which of their flirtations got them booted into the friendzone to begin with but – once you’re there – you may as well build a house with your unrequited feelings because you’ll be living there alone forever.

https://twitter.com/rapplerdotcom“>@rapplerdotcom It's when a guy is so nice to a girl that she doesn't like him anymore, it's a dark abyss that cannot be escaped from

It may seem unfair to be judged based on a panel of your peers but there is some truth to it because – let’s face it – it takes two to tango and the bonds you make say a lot about you.

So be careful who you are friends with because, for better or for worse, they will shape your life. – Rappler.com