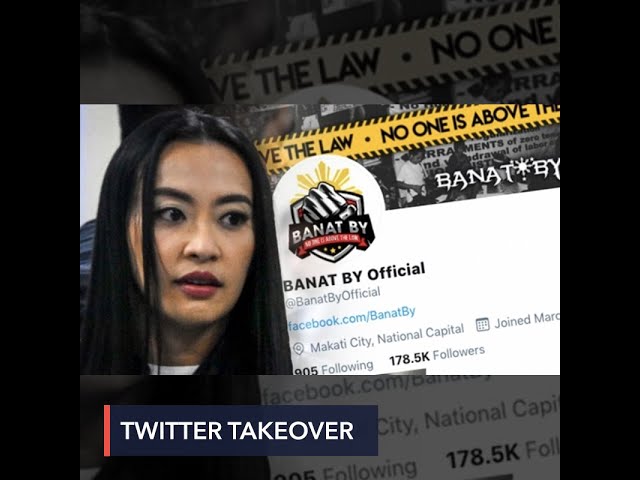 Netizens on Tuesday, July 21, pointed out that the Twitter account of Overseas Workers Welfare Administration (OWWA) Deputy Administrator Mocha Uson (@MochaUson) was taken over by another blogger, Banat By (@BanatByOfficial).

Twitter user @AltABSCBN, who is “subscribed” to Uson’s tweets, shared that s/he was surprised when s/he suddenly received a notification from Banat By.

Other Twitter users then dug up old tweets to verify this information. The exact tweets posted by @MochaUson now showed they had been tweeted by @BanatByOfficial, indicating the takeover of the account.

With the change in name, Uson’s account lost its verified status. According to Twitter policy, users with verified profiles may lose their status once they change their handle or bio to “intentionally mislead people.”

Critics of Uson were then quick to take over her old Twitter handle, @MochaUson.

Since Uson’s account, as @BanatByOfficial, no longer has the verified status – and months after #MochaUsonIsOverParty trended on social media – Twitter users again started mass reporting the account for violations of community standards.

WHO IS BANAT BY?

Banat By, or Byron Cristobal in real life, is one of the co-administrators of Mocha Uson blog on Facebook. He also runs his own Facebook page, which has at least 322,500 followers.

Posts from his own page are often amplified by Uson’s Facebook account, reaching millions of Uson’s followers.

In March, the tandem had a public disagreement when Cristobal shared his anti-Vico Sotto sentiment on Uson’s Facebook account. Avoiding backlash, Uson was quick to deny that she was against the popular Pasig City mayor, who was getting praises for his pandemic response programs. (READ: #ProtectVico trends worldwide after NBI summons Pasig Mayor Vico Sotto)

Banat By versus #Kathniel fandom

On May 14, a day after Kathryn Bernardo urged Filipinos “to stand up for what is right,” Banat By uploaded a video in response to the actress’ statement and mocked her.

As of writing, the video is no longer available on his page.

This enraged fans of Bernardo and Daniel Padilla, also known as KathNiel. They launched an online offensive against the blogger by mass reporting and blocking his account.

Since the account takeover, Banat By has deleted some of Uson’s old tweets. But Twitter users had screenshots as proof.