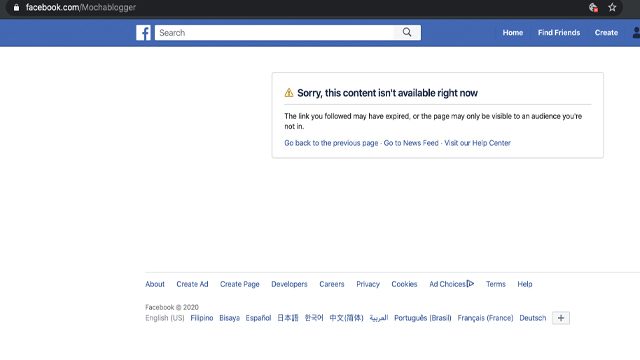 It’s unclear whether the page was taken down by Facebook or Uson herself deactivated her page.

There was, however, a movement on Twitter to take the page down on Friday night, as the hashtag “#MochaUsonIsOverParty” trended in the Philippines and worldwide, with users posting screenshots of how to report her page to Facebook.

The instructions indicated that they choose “hate speech” as the reason for reporting.

The day before, Uson shared a post by another blogger, who criticized Pasig City Mayor Vico Sotto over his plea to allow tricycles to operate on a limited capacity during the Luzon-wide lockdown. (READ: GUIDELINES: Luzon ‘enhanced community quarantine’)

The national government rejected Sotto’s request, saying it would put passengers and drivers at risk of catching the novel coronavirus.

Before her page became unavailable, Uson said in a post that she would be posting on the account “Banat By” in case her page was removed. It has 106,219 followers as of posting.

Uson’s Facebook page had around 5.9 million followers and 5.8 million likes before it became unavailable.

She was appointed Deputy Executive Director V of the OWWA in September 2018, her 3rd government position under the Duterte administration. – Rappler.com