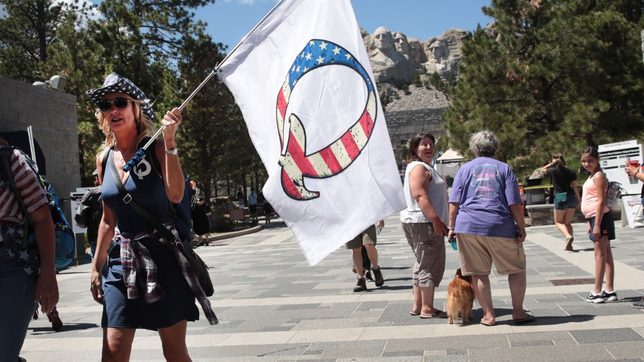 Facebook Twitter Copy URL
Copied
Twitter takes down over 7,000 accounts linked to the QAnon movement in a bid to limit the spread of conspiracy theories by its supporters

Twitter has removed more than 7,000 accounts linked to the “QAnon” movement over abuse and harassment concerns, saying on Tuesday, July 22, it will limit the spread of conspiracy theories by its supporters.

Members of the informal, pro-Donald Trump group believe – with no credible evidence – that the United States has been ruled for decades by a criminal organization involving people they describe as the Satan-worshipping global elite, including Hollywood stars and the “deep state.”

The right-wing group is also convinced of a secret plot against Trump, and its members have targeted his political opponents on social media with harassment.

“We’ve been clear that we will take strong enforcement action on behavior that has the potential to lead to offline harm,” Twitter said.

“In line with this approach, this week we are taking further action on so-called ‘QAnon’ activity across the service,” it added.

“We will permanently suspend accounts Tweeting about these topics that we know are engaged in violations of our multi-account policy, coordinating abuse around individual victims, or are attempting to evade a previous suspension.”

A spokesperson said that the social media giant had decided to act because QAnon followers were causing increasing harm.

The FBI has identified QAnon as a potential domestic terrorism threat, according to US media.

QAnon members have recently been involved in protests against measures to combat the spread of the coronavirus, especially lockdowns and face masks

Twitter said it would help stop the spread of QAnon conspiracy theories by, among other things, making sure the Twitter algorithm does not highlight sites and tweets associated with their accounts.

It will also “block URLs associated with QAnon from being shared on Twitter.”

Some 150,000 accounts will also be hidden from trends and search on Twitter, a spokesperson said.

Supporters of the group claim that “Q” or “QAnon” is a mole in the president’s inner circle who has decided to reveal tidbits of intelligence concerning the global conspiracy on fringe internet platforms.

While it originated on the edges, QAnon has built a growing following on mainstream social media platforms too. Some QAnon adherents are even running for Congress this November.