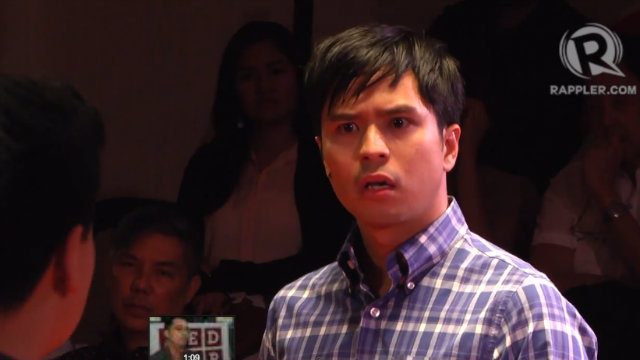 Facebook Twitter Copy URL
Copied
What does the straight play "Cock" have to say about human relationships? Find out.

MANILA, Philippines – The straight play “Cock” is just as attention-catching as its title.

The Red Turnip Theater Company explores gender roles and how it can transcend the boundaries of human archetypes. Do the labels homosexual and heterosexual hold in real life?

A bare stage. Theatre in the round. No props, no sets, no costume changes. This is what Cock is all about. A very intriguing title. Let’s find out more.

Cock is a straight play, written by Mark Bartlett and produced by the Red Turnip Theater Company. It’s the story of a homosexual man who separates from his partner and ends up falling in love with a woman. yes, puns are intended!

Showcasing talent without any props or set, Cock has garnered rave reviews since its opening March. First time director Rem Zamora says Cock is anything but conventional.

REM ZAMORA, DIRECTOR: Twenty-four years in the making, but hey. Yeah, it feels great. I’m terrified but it feels great. Ipatterned my staging, I guess you could say literally after a cock – a cockfight in an arena setting. It’s because of the stage, it’s in the round, we can’t go for the conventional. Nothing is conventional. I guess that’s what it is. And the conventional methods of staging something does not apply to this particular piece. So O went the extra mile. I literally put a cockpit on stage and I staged it like a cockfight.

AUDIE GEMORA, ACTOR: It is. It’s like you have nothing there but your lines and your truth of your character and it’s liberating actually. And I miss it. Cause I’m known as a musical theatre actor so once you get material where you can just, you know, dig into the text and just bring it to life and without all the frillings that come, you know, musicals are just so full of fru-fru. So when you get to the bare essentials of what acting is about and what storytelling is about, creating, you know, life on stage. This is it. Can’t get better than this.

Jenny Jamora plays W, The woman at the center of the conflict.

Topper Fabregas plays the character torn between a man and a woman.

TOPPER FABREGAS, ACTOR: The biggest challenge was really the text. I mean, if you look at the script, the way it’s written is there are no, what do you call this? Sometimes there’s no punctuations. There are spaces. Sometimes there won’t be any spaces and he wants, if there’s a space, that’s a pause. There’s no miming. It doesn’t describe the scene. Nothing, it’s just words, and that was the biggest challenge was looking at that and being like, why am i saying this?

Actor Nicolo Manahan plays the man who is abandoned for a woman. He says Cock breaks stereotypes.

Red Turnip’s Cock is a sexy drama that pulsates with shining performances.
So much so that the audience can’t help but stand at attention at this delicious piece of theater.
G Töngi, Rappler Manila – Rappler.com