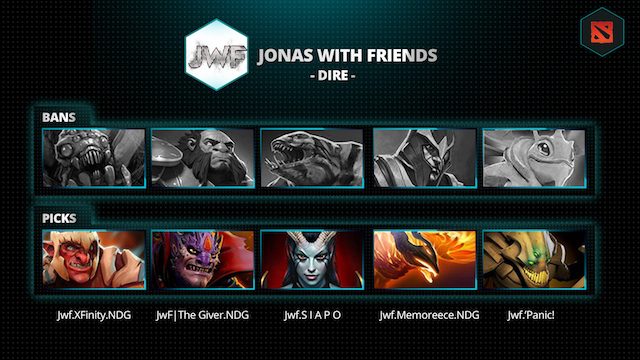 The drafting phase proceeds in favor of Jonas with Friends. From the get go, it is obvious JwF is focusing on removing any possibility of a counter initiate as they prepare for a lineup that is primarily driven by burst damage and synchronous lockdowns.K7T’s response is rather unusual as it tries to adapt to JwF’s picks. With Shadow Fiend as one of its core, K7T favors heroes that would assist the team in proper positioning.

JwF attempts an early smoke gank before the zero minute mark to catch K7T in a vulnerable position near the bottom rune high ramp. But K7T was thinking along the same lines, clustering in a defensive position at the top rune and completely avoiding JwF’s surprise.

JwF then moves to a defensive trilane at the top with Lion, Troll Warlord and Sand King against a Centaur offlane. It’s a battle against Shadow Fiend and Queen of Pain at the mid lane, with Phoenix fighting a relatively easy battle against a tri of Vengeful Spirit, Treant Protector and Sniper.

With a Queen of Pain dominating the runes and a Treant Protector unable to keep up casting Living Armor and unable to fend-off harassment across all lanes, K7T’s struggle during the early game is evident. Around 4:30, QoP is able to spot a vulnerable (and hesitant) Vengeful Spirit guarding the rune area. A haste rune was swiftly taken from VS as snowballing JwF.Siapo’s pockets are filled with a tidy sum. As the 18th minute mark comes, JwF.Siapo is a very dominating presence and conquers K7T almost single-handedly. K7T.Quack is under constant threat by JwF’s tactical rotation. With Shadow Fiend’s overall presence greatly hindered, even JwF’s offlane JwF.Memoree has the luxury of farming a refresher for his Phoenix. Thirty two minutes in, the tide seems to turn in K7T’s favor. A badly positioned JwF.Siapo is the perfect opening for K7T.Quack’s Requiem, severely reducing the teamfight advantage for JwF and allowing K7T to regain its footing. This goes on for a couple more team fights until K7T had to finally cover more ground as it pushes. This did not go well for the team as it was underfarmed and did not have enough coordination to fend off JwF’s defensive maneuvers.

Winning teamfights was the only chance K7T had to keep itself afloat. With all of Dire’s towers intact and a kill score double of K7T, JwF was unstoppable. K7T’s adaptability allows it to last 64 minutes into the game considering it had to deal with a huge deficit incurred during the early stages of the match. Unfortunately, it wasn’t enough to hold off the series of powerful and intimidating hostility from JwF. Troll Warlord is left mostly undisturbed for the better part of the hour long game thanks to JwF.Siapo’s commanding lead as QoP.