Rappler Talk: Are the Lumad victims in war and peace? 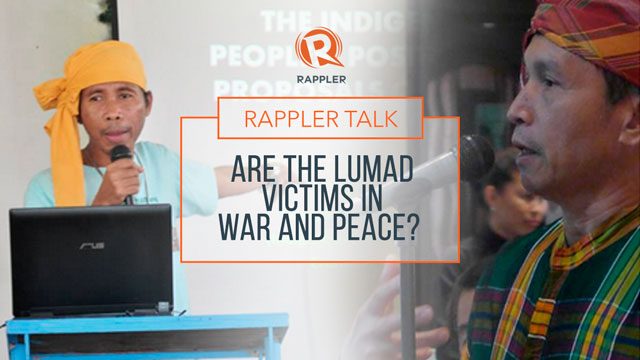 Facebook Twitter Copy URL
Copied
What is the impact of the peace process on indigenous peoples in Mindanao?

Lumad groups like the Teduray, Lambangian, Dulangan-Manobo, and Erumanen ne Menuvu say their voice is not being heard in discussions on the proposed Bangsamoro Basic Law (BBL). They fear the BBL will threaten their ancestral lands and indigenous culture. In war and in peace, they feel they are victims.

The proposed Bangsamoro law “recognizes, promotes and protects the rights” of the Lumad in Mindanao, but does not mention the Indigenous Peoples’ Rights Act (IPRA). It is a law passed in 1997 that has yet to be implemented in ARMM.

The Malacañang-convened Peace Council in a recent report submitted to the House of Representatives recommended to spell out the rights of indigenous peoples in the envisioned autonomous region. – Rappler.com

Join the conversation on Twitter facilitated by Rappler’s civic engagement arm, @MovePH. Use the hashtag #ProjectMindanao.