Japan, PH navies fly together for the first time

Jun 24, 2015 1:52 PM PHT
Rappler.com
Facebook Twitter Copy URL
Copied
They say it is only a simulation of a search and rescue operation but this is also the first time that the Japanese navy is flying over the West Philippine Sea 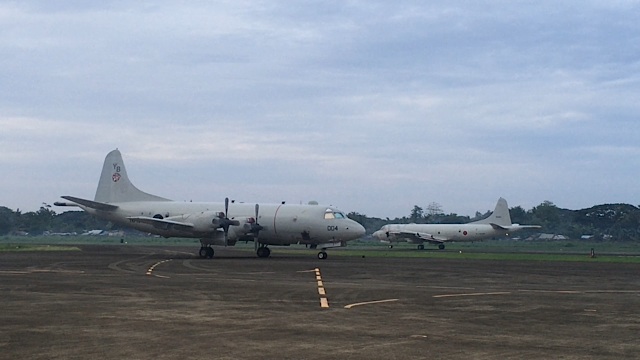 Two foreign P3 orion spy planes are here in Palawan, the Philippine island closest to the disputed areas in the South China Sea. One is owned by the US navy and the other by the Japan Maritime Self Defense Force.

They’re here doing exercises with their Filipino counterparts as China is reportedly completing construction of artificial islands in the disputed seas.

Exercises with old treaty ally United States are all too common. But with Japan, a World War II enemy turned ally, this is the first time that they’re flying together.

They say it is only a simulation of a search and rescue operation but this is also the first time that the Japanese navy is flying over the West Philippine Sea.

More than the task, the training is focused on synchronizing communications and techniques so the two navies learn how to operate together.

COMMANDER HIROMI HAMANO, Japan Maritime Self-Defense Force: After take off, we conduct a search and rescue training. We search any ships or fish boat or missing aircraft. We report to Philippine Navy that information of the ship so we have a very good training. After training, we have, three times , touch and go, to familiarize with the Puerto Princesa airport.

COLONEL JONAS LUMAWAG, commander of the Philippine Naval Air Group: What we are trying to to do now is we’re trying to align ourselves with the capabilities of other nations so that the standard would be the same.

The two countries with territorial rows with China agreed to begin talks on a visiting forces agreement that will also give Japan access to Philippine bases.

Aquino says this game-changing agreement will go through the Senate, which has exclusive power under the Philippine constitution to forge treaties.

But this training exercise shows the navies won’t wait.

Rappler asked high ranking Philippine navy officials for the legal basis that allows this training exercise. They cite the Memorandum of Defense Cooperation and Exchanges, an executive agreement signed in January between Japan’s ministry of defense and the Philippine Department of National Defense.

The Senate deliberation is expected to be tedious but security officers say the threat of China’s islands is here and now and these training exercises must start.