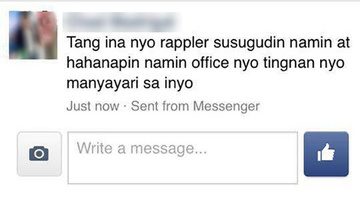 Facebook Twitter Copy URL
Copied
No one deserves to be bullied for asking questions in a public forum. We condemn this behavior.

On Sunday, March 13, a Facebook page to bully a student from UP Los Baños started gaining traction in one of the worst cases of public collective cyberbullying we’ve seen so far. In an online campaign apparently created by supporters of presidential candidate Rodrigo Duterte, the student, who did nothing but ask a question, was bashed, bullied, and threatened.

Many of the posts break the law under the Philippine penal code, a point that Duterte’s avid followers may not be aware of.

But the damage is done.

The trigger was an otherwise mundane story: how students wanted more direct answers from Duterte during last Friday’s forum at UP Los Baños. Below is Rappler reporter Pia Ranada’s take on what happened:

During the question and answer portion, his responses are long and winding as one student points out.

The lack of time cuts the question and answer portion short to the student’s dismay.

So are the students convinced?

With the limited days left to the campaign season, Duterte needs to get his point across before time runs out.

(WATCH: UPLB Students to Duterte: Give us direct answers)

Duterte’s supporters saw this as unfair criticism, yet his inability to be succinct is something his own campaign team acknowledges.

A flurry of attacks was directed against Rappler, including charges of bias, a call to boycott, and other forms of threats such as the one captured in the image you see on this page.

Then Duterte’s supporters went on a witchhunt, actively looking for the student who questioned their candidate aggressively. They zoomed in and attacked the wrong student, discovered in a video cutaway. The student wrote us an open letter. We immediately re-edited the video to take out his video and told our audience he didn’t ask the question.

Immediately after, the online rampaging mob went looking for the student who did ask the question. Once they found him, they created a Facebook page threatening death. They repeatedly attacked him and others they suspected of being against their candidate. Some tell us they’ve even been texted or called on their cell phones.

A student’s father emailed us asking for help in dealing with the attacks against his son as welll as its psychological impact. (We withhold their names for their protection and ask others to do the same).

We reported these actions to Facebook, whose policy explicitly states: “You will not bully, intimidate, or harass any user” and “You will not post content that: is hate speech, threatening, or pornographic; incites violence; or contains nudity or graphic or gratuitous violence.” Early Monday, March 14, Facebook took down the page that was put up to threaten the student.

There’s no doubt there’s greater cynicism, but we at Rappler have long extolled the virtues of the Internet and how social media democratizes power. We’ve seen that power first-hand: when netizens help save lives during typhoons by crowdsourcing information and action on Agos; when one Facebook post gets more than 100,000 Filipinos protesting against corruption during #MillionPeopleMarch; or when Filipinos and Indonesians get together to #SaveMaryJane.

Social media promised to be a tool for empowerment and discussions to help break long-standing power structures in our society.

But it also has a dark side.

We also saw how social media impacts public opinion and how important that is in these elections –  to the point that we found evidence of manipulation for Mar Roxas in our December online poll. (READ: Who gamed the Rappler election poll?)

No one deserves to be bullied for asking questions in a public forum. We condemn this online behavior. It is a disservice to their candidate and can only harm Duterte in such a close race.

Under the Philippine penal code, these actions can fall under election-related offenses which carry the penalty of 1 year minimum imprisonment.

Some justify their attacks as signs of extreme frustration, evidence of their yearning for change.

Unfortunately, no one seems to be listening because behaving like an online lynching mob only turns social media into a wasteland.