Why Bongbong Marcos is good for Miriam Santiago Predictably a lot of people went crazy when Senator Miriam Santiago announced that her running mate is Senator Bongbong Marcos.

Social media exploded with people proclaiming their frustration: Why, Senator Miriam, why? – complete with the hashtag ‪#‎neveragain‬.

The answer is simple, provided that you have the intellectual capacity and the maturity to look at it objectively.

Senator Santiago chose Senator Marcos for the simple reason that he has proven to possess the qualities that she values the most. Situate the analysis of his accomplishments in a vacuum and assess it objectively. Take a look at but a small sample of what he has done in the 16th Congress alone.

Name another legislator who has pushed forward a bill to provide affordable housing to lower income and lower-middle income households in urban areas (SB 423: Department of Housing and Urban Development Act of 2013).

Who was the author of the bill (SB 422) that sought to provide protection, rehabilitation, and reintegration for children in conflict areas?

Who was the author of the bill (SB 409) that aimed to cultivate a globally competitive soybean industry here in the Philippines – a soybean industry that could take advantage of the growing demand for soy and soy based products both here and abroad?

Guess who authored a bill (SB 408) that was designed to secure funding and support for hydrogen research and development here in the Philippines – a tacit recognition of the potential uses of hydrogen in the near future.

How about the First Class Public Schools and Libraries Act, The National Mariculture Act, The Teachers Education Act, and the Public School Teachers’ Salary Upgrading Act?

Also, who crafted the constitutionally sound alternative to the Bangsamoro Basic Law (BBL)?

Every other vice-presidential candidate will be hard pressed to match Senator Marcos in terms of sheer legislative output and acumen, experience in local governance, and scope and breadth of governance platform.

And you wonder why Senator Santiago chose him.

Basically, most any argument that would be hurled against Senator Marcos would be ad hominem. Given that any discussion, any comparison of vice-presidential candidates on the basis of qualifications would be decidedly in his favor. Again, and you wonder why Senator Santiago chose him.

(For anyone who wants to argue that Senator Santiago should have chosen Senator Trillanes, please refer to my tweets at @IAmDavidYapII.)

Now the real question is this: Why are you against Senator Marcos?

Let’s preface the discussion with the hashtag #neveragain. What does this mean? It’s not a complete sentence. It’s a phrase. Let’s fill in the blanks. 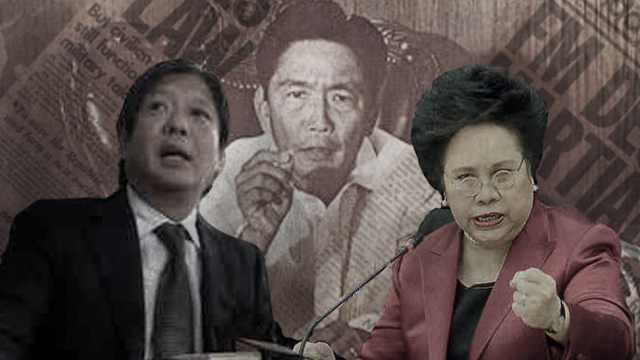 Perhaps it is never again to Martial Law. Given the present configuration of the Philippine government, the dynamics of political power, and the political landscape, any president will be hard pressed to declare martial law. (LOL if you think a vice-president not named Francis Underwood can declare martial law.)

Perhaps it is never again to corruption. Let’s define corruption as the use of government resources for personal gain (which is of course the standard definition, and the definition that encompasses more than just plunder). Who again was the president who leveraged the power of government to insulate a large tract of land from agrarian reform?

Maybe, it is never again to cronyism. Take a good hard look at how the spoils of EDSA were divided to a select few families.

Maybe it is never again to suppression of free speech. Who was the first president to file a case against a journalist for libel – over an article that contained a metaphor? Which country (not presently a war zone) is the worst country for journalists?

Maybe it is never again to human rights abuses. Remember the Mendiola Massacre? How about the continued maltreatment of farmers in Hacienda Luisita? How about something more recent  how about the tens of thousands of families living in squalor in Yolanda-ravaged regions?

At this point some of you might be raring to retort with something along the lines of: “The corruption, cronyism, and human rights abuses were much worse in the Marcos administration.”

While we are in the topic of blaming descendants for the sins of their ancestors – why aren’t you calling out Noynoy Aquino for the role his ancestor played in World War II? You didn’t say #neveragain when Noynoy Aquino ran for president. So what exactly are you saying never again to?

You are saying never again to a Marcos. You are not going to vote for BBM simply because he is a Marcos. Your vote was not decided on the basis of qualifications – it was decided by last name recall.

My point is this: Anyone who is vehemently against Senator Marcos, just because of his last name, is no longer looking purely at qualifications.

If you use any form of ad hominem argument – if you veer away from a discussion centered on issues, qualifications, and platforms, then you cannot call out people as uneducated voters. Put simply, if the last name of a candidate is your sole metric for your judgment, then you are, by definition, an uneducated voter.  – Rappler.com