They must think we’re stupid

Oct 22, 2015 9:05 AM PHT
Shakira Sison
Facebook Twitter Copy URL
Copied
'Our professional politicians think we don't keep track of their mistakes. Or even if we do, it's not our opinions that matter' So they think we’re stupid, those people in red, raising each other’s arms like they have fresh faces, having the audacity to call for a “revolution” in a country they themselves raped.

So they think we’re so forgetful that we’ll just admire their smiles and their outfits and not think of their offenses in both the distant and immediate past. That we’ll gloss over the fact that those arms are being raised by plunderers, convicted and ejected only years before, but back in power just to show that even the justice system is in the palm of their hands.

They think we don’t notice the rehearsed speeches, the practiced Tagalog, the pro-poor messages. They think it covers up the fancy foreign schooling that resulted in crafted diplomas, or how they have maintained their circle of powerful friends who are only too keen to benefit from their secret bank accounts.

They think nobody is watching this theatrical performance from afar, that we don’t notice that those sweaty armpits are a result of those lies, that those oily and weary faces are aware that this is all a tired old story that they repackage time after time.

A tradition of theft

They think we’re oblivious to that surname that is supposedly the reason the central business district thrives. That we’ll overlook the fact that this political dynasty is comprised of a father, mother, sister, and brother who have made corruption cases the tradition of their name. If that’s not a family legacy then I don’t know what it is. It must make one so proud to follow that tarnished path.

And what about the urong-sulong (back and forth) cha-cha a hopeful dictator tried to pull with his reluctant presidential candidacy? Even the lawyers among my smarter acquaintances have grown so tired of their fellow Filipinos’ complacency and lack of discipline that they now believe this man who promotes summary execution has the answers. I understand that it’s inspiring to listen to a man who says he’ll clean up the streets and eliminate unwanted elements. Sure, until it’s a relative of yours who is killed without due process. All of a sudden, we’ll regret putting a lawless verdugo in Malacañang. Don’t forget that we’ve seen that iron fist one too many times.

We sighed with relief when a big-haired longtime politician and current catchphrase and meme star decided she’s in the game. Until of course she chose an unapologetic murderer’s son to be her right-hand man. That was enough admission from the lifelong scholar of laws that she is not bothered by her running mate’s family’s offenses, but she even took it as far as explicitly stating that an apology is not neededfor the deaths and debts that family has incurred with pride. 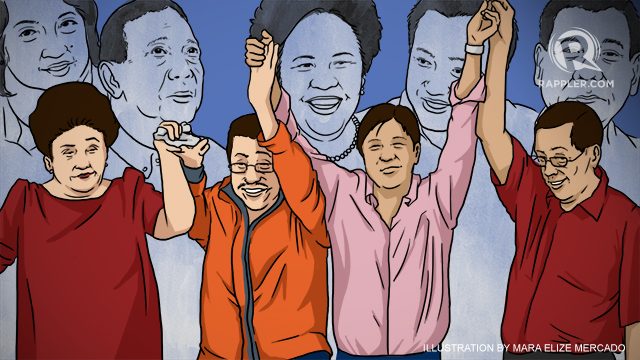 They think we’re not watching

Those troublesome prospects, the sleepy “safe” bets, the usual administration’s pets, as well as the 130 other presidential candidates that filed their certificates the other day make up this political circus that just can’t wait to begin. As if we’re not already laughable. As if this party needs another clown. As if we aren’t battered and weary enough from these cycles of distractions, manufactured victories, and lies.

They think we’re not watching this predictable novella, when those we elect pilfer from the nation’s coffers, land themselves in jail, feign medical issues, get released, and then run again for office. It’s as if impeachment, conviction, and imprisonment are prerequisites to be elected to the highest posts in the land.

Exhausted, we wait for these crooks to die off and be replaced by younger, more conscientious ones. But it seems they raise new models like their families are factories that replace old thieves with younger and more energetic ones. Where their offspring are taught that their parents are sinless and God-fearing, that they did what was right and necessary during their time.

Just like in the past, there is no doubt that the election will be won by the masa (lower classes), those whose opinions we won’t see in our Facebook feeds, and whose voices we often don’t even care to know.

It only takes a few seconds of listening to a campaign speech to know that those who seek power are aware that only the votes of the lower classes matter, that all they need are celebrities to come up on stage to endorse them and they will win. That a sob story about being the dark and short Robin Hood of the Philippines is somehow believable.

If it’s the D and E classes that put our leaders in power, does that mean that those who have access to education and employment can’t do anything about who is elected?

There’s an air of resignation that it’s the same old faces and the same old tricks that will comprise the game in 2016, but the truth is that we’re comfortable in these performances. We’re fine with a select few being able to lead the masses like a brainless flock. We have accepted the pleasure of having employees and servants who follow our orders instead of questioning the social structures that keep them bound.

We who say we are tired of political dynasties and corruption are also the ones who make money off mindless shows that keep people busy and make them settle for a happiness of seeing their love team. We write the scripts, we produce the story plots. We edit the political commentary out of story lines. We sell the ads that run in between segments and we follow advertiser’s requests to keep things light – devoid of seriousness and real world issues. We don’t want trouble, we just want to coast. We are complicit in keeping those who don’t have the same resources from scratching the surface of what is handed to them.

We run the cinemas that stop showing independent films that make people think. We put up the billboards that turn our focus on physical beauty, so that money is spent on visual self-interest instead of focusing on the benefits of educating our women over keeping their skin light. We brag when we visit a public official’s extravagant home. We don’t have a problem when the daughter of a corrupt leader calls us her friend and asks us aboard her yacht.

Majority of middle and upper class Filipinos have employees – both household and business workers, if not workplace subordinates. Knowing that the face of the future president lies on their shoulders, have we ever asked our employees who they’re voting for and why? Have we checked if they remember or have even heard of the horrors of Martial Law? Have we reminded them about the current candidates’ corruption scandals? How about their past performance and policy track record? Have we reminded our employees what their president needs to do to better their lives?

Have we asked the people we might be able to influence how they feel about the political landscape? If, in the end, they are the ones who vote in numbers and decide, can we take the time to remind them that the appearance of their favorite celebrity at their campaign rally is not going to ensure that these candidates will actually ease their plight?

But we are too busy dealing with traffic, pollution, flooding, the latest weather disturbance, and our ridiculous income tax rates. We are too busy figuring out how to get customs to not charge us for our balikbayan box. It’s as if the country’s problems are designed to keep us busy and distract us enough so we don’t have time to complain beyond what immediately bothers us. When it is life-threatening to get to and from work each day, it is ridiculous to expect anyone else to look past themselves, much less to see what their fellow citizen is doing or what opinions they have.

Our professional politicians think we don’t keep track of their mistakes. Or even if we do, it’s not our opinions that matter. They believe that the people whose favor they care about are those who are swayed by a sexy dance, and that those who fill our social media feeds with their complaints cannot influence what the voters they care about will decide come election time.

We all know our politicians think we’re all stupid, but have we actually asked ourselves if we actually thrive in this flawed system where those on the lowest rung never advance? Are our leaders correct in thinking we are stupid because we keep each other dumb? – Rappler.com