Rice self-sufficiency: A question of geography?

Dec 12, 2015 10:30 AM PHT
David Dawe
Facebook Twitter Copy URL
Copied
Being on the mainland or an island plays a major role in a country's rice production 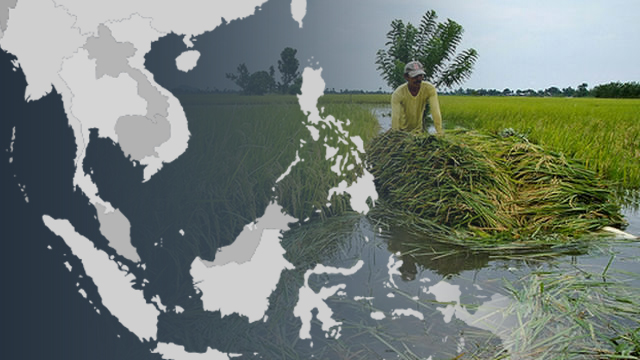 Southeast Asia is the hub of the world’s rice economy. As a region, it has been a net exporter of rice for most of the past 110 years (the exception being some years between 1967 and 1978).

It contains two of the world’s top 3 exporters, but also two countries that, from time to time, have each been the largest rice importer in the world. Why are some countries in this region self-sufficient in rice while others are not?

Self-sufficiency is achieved when production exceeds consumption, so lower rice consumption should give a country a head start in achieving rice self-sufficiency. Yet, people in the traditional rice-importing countries (Indonesia, the Philippines, and Malaysia) eat less rice.

On the supply side, each exporting country in Southeast Asia (Thailand, Vietnam, Myanmar, Cambodia, and Lao PDR) has more production per person than each of the 3 rice-importing countries. But, surprisingly, the reason for higher per capita production in the exporters is not higher yield.

In theory, the reasons why the exporting countries might have more rice area per person could be that their land is more suited to growing rice (as opposed to other crops), cropping intensity (the number of crops planted per unit of agricultural area) is greater, more land is used for agriculture, or more land is available per person (low population density). 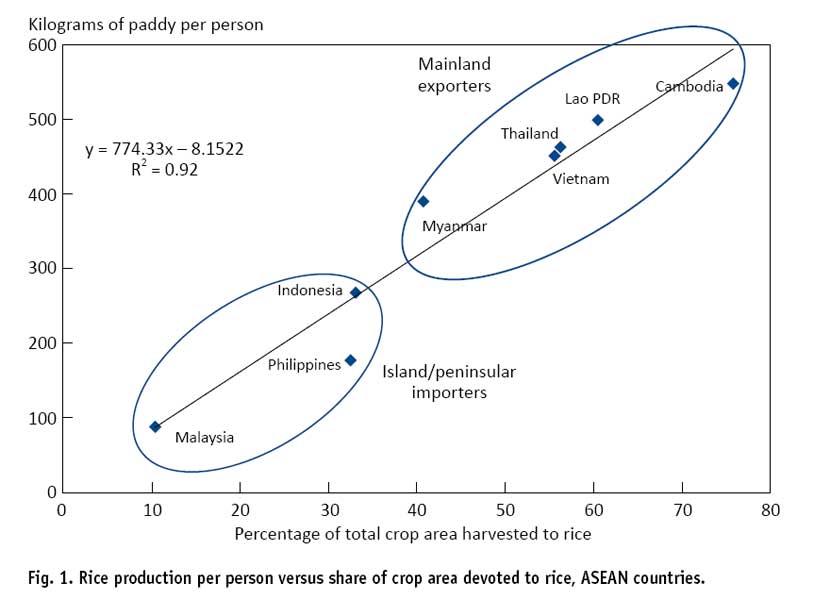 Empirically, the proportion of total crop land devoted to rice, which is a measure of the suitability of land for growing rice, explains rice production per person across countries almost perfectly (the R2 of a simple linear regression is 0.92; see Fig. 1). Thus, the importers are all to the lower left of the figure, while the exporters are to the upper right.

The geography of rice production

A common feature of the 5 rice-exporting countries (in the upper right of Fig. 1) is that they are all on the Southeast Asian mainland, while the countries to the lower left are islands or peninsulas.

Why might location make a difference to net trade status? Well, the countries on the mainland have dominant river deltas that provide ample water and flat lands, which make it easier to control the water. Such an environment is suitable for cultivating rice.

The importance of geography can also be seen at subnational levels: southern Thailand, a narrow peninsula, produces insufficient rice to feed its population and must “import” from the rest of Thailand, while Central Luzon in the Philippines, fed by the Pampanga River, produces more than enough rice for its own needs and “exports” rice to Manila.

Other key rice importers in Asia are also islands or peninsulas: Japan, Korea, and Sri Lanka. Bangladesh is the exception that proves the rule.

It is located on the mainland and devotes a large share of its crop area to rice, but the country is a small net rice importer because of its extraordinarily high population density, more than triple that of the Philippines, (which has the highest density of the 8 countries studied here).

Thus, in terms of achieving rice self-sufficiency, island countries have a natural disadvantage. Less of their land is suited to growing rice. As a result, they cannot compete at the margin with the mainland rice exporters. 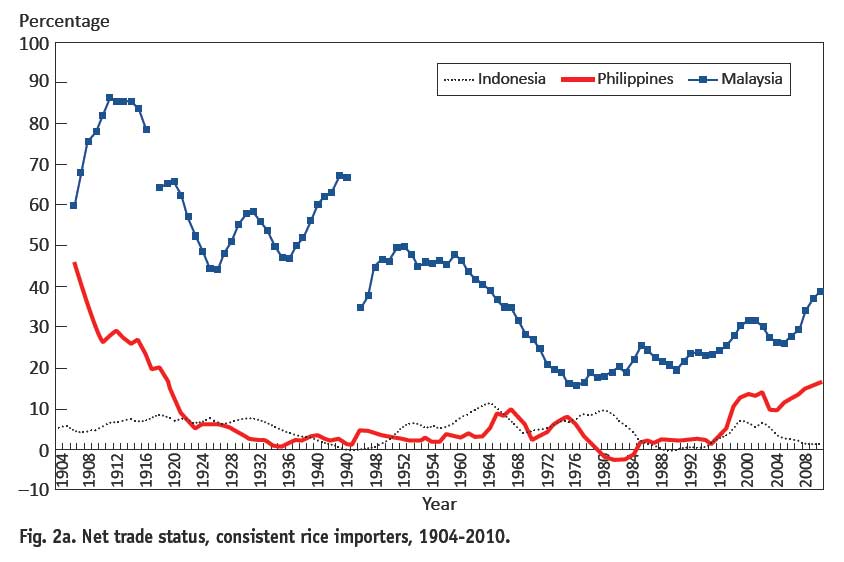 The Philippines and Indonesia both became self-sufficient for a time in the 1980s, and even exported small amounts of rice. This achievement was due to the Green Revolution package of high-yielding varieties, irrigation, and fertilizer, which was adopted earlier in these two countries than in the exporting countries.

Malaysia, Indonesia, and the Philippines have been importing rice for more than a century, while the other countries have been exporting for most of that time (Fig. 2a and 2b). 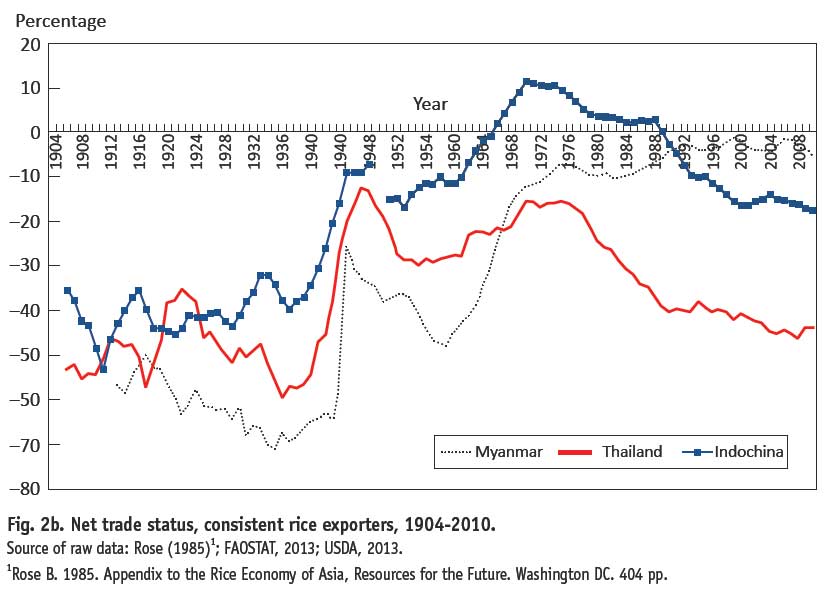 On the exporters’ side, Vietnam was a rice importer in the 1960s, ‘70s, and ‘80s due to the war and highly repressive farm policies. In addition to this geographic pattern is a consistent temporal pattern.

Of course, some exceptions exist for both groups, but these exceptions were due to “revolutionary” events.

The problem with such a strategy is that there is a very good reason why fewer farmers grow rice in the importing countries, namely, other crops are more profitable. Forcing farmers to grow rice will reduce their income, which will work against household food security.

The policy of restricting imports to achieve national self-sufficiency and reduce reliance on the world market raises domestic prices, which reduces household food security because most of the poor have to buy their rice in markets and are hurt by higher prices.

Higher domestic prices also result in other costs, such as reduced farm diversification, poorer nutrition, and less competitiveness in other sectors of the economy. These costs should be considered in the design of national policies. – Rappler.com

Dr. David Dawe is a senior economist in the Agricultural Development Economics Division of the Food and Agriculture Organization of the United Nations.

This was originally published on Rice Today and republished with the website’s permission.