Yes, Pedro, we need to modernize the jeepney 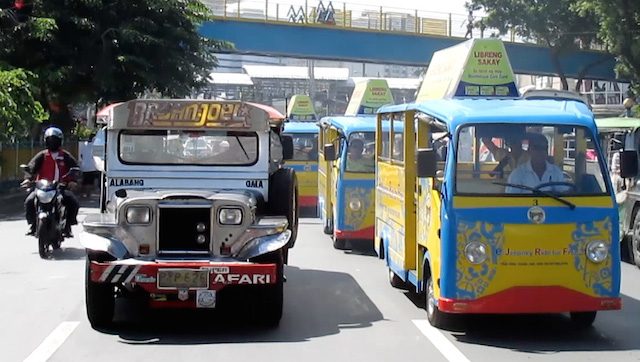 Facebook Twitter Copy URL
Copied
The former icon of Philippine culture is not something to be proud of anymore. It has lost its luster. It has turned into a symbol of decay and neglect.

As far back as I can remember, the Philippine jeepneys made by pioneering jeep builders such as Sarao, Francisco Motors, and later, Malagueña and David Motors, have always been a cultural icon for us, Filipinos. The jeepney is to Pinoy transport as adobo is to Pinoy food. If you are a foreign tourist, you could not say you have truly been to Manila if you have not ridden a jeepney – or taken a selfie with it.

Even our family, who was into making “owner-type jeeps” under the brand name MD Jeepstar, came out with its own Jifney models, the huge 22-seater Laguna-type jeepneys. The jeepneys were famous for their colorful body designs, plenty of horses and mirrors and a loud, blaring stereo dishing out hard rock music. They were the kings of the road.

As a child of the 80s, I would rate the artworks of the jeepneys I’d see on the streets, and the ones from the Lagro-Novaliches route would always be on top because they used spray brush art as opposed to the hand brushed ones. Running a close second were the ones from Blumentritt.

But sadly, those days are gone. All what’s left of the shining kings of the road of old are scraps of rusted and dented metal lucky to still be pieced together, struggling to survive the city’s potholes.

Even the financial viability of these jeepneys has seen better days. It has waned as too many franchises were granted, although no new routes were developed. Add to this the rising costs of fuel, parts, and maintenance and we have the drivers and operators practically living on a hand-to-mouth existence.

As a result, these jeepneys could hardly be maintained. There is no such thing as change oil – they merely top off every month and thus underneath the pistons are unwanted mud and grime. Brakes and tires are worn off, posing ever-increasing safety risks. The jeepney bodies are of heavy stainless or galvanized iron and the wheels are rarely balanced and aligned, which makes them even more inefficient.

But worst of all is the pollution. Anybody who takes a jeepney traversing the whole stretch of Commonwealth Avenue would discover that it is not a pleasant experience at all. (READ: The 15 passengers you’ll meet on a Philippine jeepney)

Jeepneys comprise only 2% of the total vehicle population in Metro Manila yet they contribute a staggering 80% of its total air pollution. The former icon of Filipino culture is not something to be proud of anymore. It has lost its luster. It has turned into a symbol of decay and neglect.

Aside from air pollution, there is also a deep social issue in the jeepney transport system that can only be seen if you look closely enough. This is the oppressive “boundary system” that has evolved through the years. It’s a somewhat antiquated feudal system that oppresses the driver and eventually, even the jeepney owner or operator.

Under the boundary system, the driver has to operate for an unspecified number of hours to raise a fixed amount of fares that he pays directly to the jeepney owner. This minimum amount is called the “boundary” that goes to the owner or franchisee of the jeepney line. After filling up the jeepney tank, the driver keeps anything in excess of the boundary as daily earnings.

If the trips are bad and the driver raises less than the boundary, he still has to shell it out and go home empty-handed after a long day’s work.

The situation is aggravated by increasing competitiveness, forcing the driver to drive for an average of 16 hours a day to raise his boundary and come home with just a little something to spare. This leads to health issues. Some drivers are said to even resort to drug use just to endure the long shift.

As a result, the operators barely get enough money to sustain themselves, making jeepney maintenance close to impossible. They are stuck to a vicious cycle where jeepney drivers can only drive for 3 consecutive days and then take the rest of the week off. The operators can only operate a maximum of 20 days a month as on other days, the jeepney is either being repaired, maintained, or has to stay in the garage under the color-coding scheme.

This is why there are so many jeepneys, but not all of them are on the road. A great number of them are on street sides or underneath bridges being repaired because there is no formal garage or terminal for them.

Something has to be done. And fast. And we do see a glimmer of hope.

The DOTC said it will implement a jeepney modernization program. Under the program, all jeepneys 15 years and older will no longer be allowed to register their vehicles and subsequently not have their franchises renewed by the LTFRB. This will pave the way for newer and less-polluting jeepneys to come in. (READ: To improve traffic in 2016, DOTC to overhaul bus, jeepney systems)

This is also where the electric vehicle industry is pinning its hopes. The Electric Vehicle Association of the Philippines (EVAP) has indicated that it wants to push for the use of EJeepneys as an option in the jeepney modernization program.

For starters, there are now several EJeepney systems running in the metro. The pioneering one is in Makati with 10 units, the largest in Filinvest City with 20 units, and another inside the Ateneo campus with 4 units. These are all small-scale operations but they neverthless prove that EV technology and its electrical system really work.

EVAP is pushing for bigger 21-seater units and for them to ply major thoroughfares, not only small communities and its side streets. Also, an efficient fleet management system is recommended for EJeepneys so that the vehicles will have a fixed terminal and the units are not just scattered in the side streets. The units can also be cleaned, repaired, properly maintained and charged in the terminal.

Fleet management also ensures profitability as the operator can now enjoy economies of scale. Drivers will be hired and given monthly salaries and government-mandated benefits. This way, drivers will be trained properly for safety and traffic regulations. They can also be issued uniforms and maintain proper hygiene.

We hope the electric jeepneys can capture a big chunk of the jeepney modernization program. Replacing the diesel-guzzling, smoke-belching dinosaur jeepneys with no-emission EJeepneys will definitely not only improve our transport system but will also have an unprecedented effect on our environment as well.

What we need is a change in mindset, a paradigm shift to change an antiquated system that politicians are scared to touch for fear of aggravating a large voting bloc.

But once the industry, the politicians, the government and the masses realize the benefits of electric vehicles – for the environment, for the driver, for public health, for the income of both drivers and operators and even for the improvement of our horrendous traffic situation – then everyone would wake up to the reality that EJeepneys are the way to go. For a better future. – Rappler.com

Rommel T. Juan is the CEO of MD Juan Enterprises. He is the president of the Electric Vehicle Association of the Philippines (EVAP), and vice president of PhUV Incorporated.