Mar 14, 2016 3:46 PM PHT
Marty Gonzaga
Facebook Twitter Copy URL
Copied
'It’s your job as his supporter to keep him and his power in check' The guy who defends him on Rappler articles saying, “Di bale kung babaero siya. Anong kinalaman ng personal life niya sa pagiging competent na presidente?” (It doesn’t matter if he’s a womanizer. What does his personal life have to do with his being a competent president?) The guy who sends anonymous death threats because Gab Valenciano holds a contrary opinion. The one who Carlos Celdran calls ‘delusional and lazy’.

For the record, you don’t deserve the name calling. Labeling you a ‘Dutertard’ is immature and doesn’t add value to the electoral discourse. It’s not going to convince you to stop supporting your candidate. If anything, insulting you only empowers you. It makes you feel like a martyr. An underdog. It adds fuel to your fire.

Besides, I think I understand you. I really do.

You’re tired. Tired of coming home past nine after being stuck in two hours of traffic. Tired of having to double-check your pockets when walking through crowds. Tired of having to wrap your luggage in plastic at the entrances of NAIA. Tired of hearing promises of change. Tired of the same names with nothing to show for it.

Duterte, like the bad-ass Daenerys Targaryen, isn’t going to stop the wheel. He’s going to break the wheel. With his no bullshit and take-no-prisoners attitude, Duterte is a breath of fresh air in the circus we call Philippine politics. “Finally, a politician with balls who will bring real change!”

I know how easy it is to feel desperate in times like these. It’s easy to be swayed by powerful rhetoric. It’s easy to trust our gut and to vote with our feelings. It’s how we’re wired as people. As a marketer, my entire profession is built around the idea that consumers buy brands that tug at the heartstrings. And Duterte’s brand? It doesn’t just tug at your heartstrings; it sets your tired, desperate, and angry soul ablaze.

And you’ve thought about this too, I know. It’s not just your voting with your emotions. I admit, he’s had smart moments. While I won’t be voting for him, I can definitely get behind federalism and decentralizing the Manila-focused economy. And I believe you when you say that Davao flourished under his term. That’s why even I don’t care that he swears a lot. ‘Substance over form’ nga naman.

Because you want him to win so badly, you defend him against all his detractors and critics. To you, Duterte is the Philippines’ last, best hope. And maybe Duterte is the best. Maybe. That isn’t the point.

The point is that it’s possible to vote for and agree with someone without agreeing with everything that comes out of his mouth as if it’s the Gospel truth. No candidate is perfect, not even the best ones. 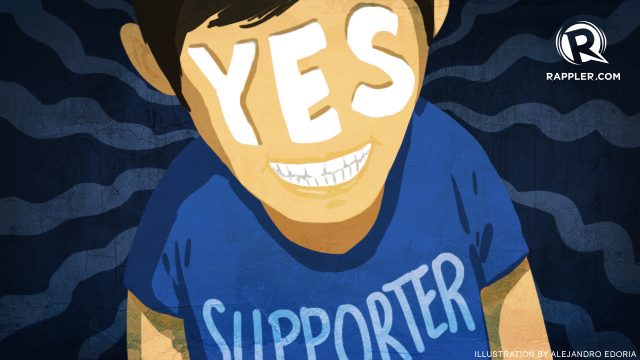 You can agree with 50-, 60-, or even 70% of what he says AND still call him out angrily whenever he says something stupid. Saying something stupid doesn’t make him stupid.

But overlooking the bad things that (allegedly) good people do is how tyrants are born. It’s your job as his supporter to keep him and his power in check. Real friends don’t let their friends do stupid things. #intervention

More importantly, as Filipino citizens, you deserve to ask more from your candidate. He will never be perfect, but that shouldn’t change the fact that you should be demanding continuous improvement. We deserve nothing less from the highest office in the land. For Duterte to say “take me or leave me” is bratty, immature, and arrogant. Wala siyang room for improvement, ganon? But I digress. (READ: #PHVote: Why is Duterte so appealing?)

I’m not going to beg you not to vote for him. I think the arguments for why we shouldn’t elect a womanizing, human rights abuser (by his own admission) into office have been said. If you haven’t been convinced by any of those yet, then I really don’t think anything I can say will (though it won’t stop me or others from trying).

At the very least, I will ask you to say “Yes” to Duterte…with reservations.

1. I ask that you turn your “Competent naman siya kaya okay lang kung babaero siya.” (He’s competent which is why it’s okay if he’s a womanizer.) into a “Competent siya, pero hindi sana hindi na siya maging babaero. Or mag-sorry man lang siya.” (He’s competent, but I wish that he wouldn’t be a womanizer anymore. Or that he would at least apologize.)

Calling him out for being an unapologetic womanizer isn’t just an irrelevant attack on his personal life. It speaks of being complicit to the internalized misogyny of Philippine society – an issue he should be cognizant of as an aspiring head of state.

I hate that I have to repeat this, but it says a lot when a male candidate will get a surge in the polls for being perceived as macho for having multiple girlfriends. A woman with two boyfriends would be called a pokpok (whore) and hated. If that isn’t the definition of outright sexism, then ewan ko nalang.

2. I ask that you say yes to being tough on crime, but demand that your candidate find a way to do so without resorting to vigilante justice that bypasses due process.

As hard as it is to imagine, it’s never been a question of discipline or human rights. It’s always been discipline and human rights. Go to (or at least read about) life in Western Europe, and you’ll see it’s possible.

In the first place, the threat of death penalty doesn’t even reduce crime rates, according to Amnesty International. And ‘teaching kids a lesson’ by sending minors to jail (yes, Duterte said that) does more harm than good.

According to UNICEF Philippines, a ‘first-time offender’ kept out of jail is eight times more likely to change and become an honest, productive citizen than those who go to jail. All this assumes that Duterte (and the guns he allegedly hires) have King Solomon-like wisdom. It assumes that he’s never wrong about who he chooses to kill in the name of safety and security.

Even with due process, the courts have been wrong. What more when the trial is done away with entirely? At minimum, be consistent: remember when you prayed for Mary Jane Veloso’s release when she was being accused of being a drug mule?

*not to mention the fact that Duterte’s “iron fist” seems to only apply to poor, small-time petty criminals with no access to lawyers. Big-time criminals like GMA get ‘house arrest’ and are ‘innocent until proven guilty’ (but, again, I digress).

3. I ask that you continue to be proud of what Duterte has accomplished in Davao. But I also ask you to challenge the idea that (1) Duterte did it all by himself – without the cooperation and willingness of the citizens of Davao and without support from national initiatives and (2) Duterte can replicate Davao’s success nationwide, where the issue is far more complex than just instituting a centralized 911 and eliminating petty crimes.

Sabi nga ni Binay, “I will make all cities as rich as Makati.” We all know that’s impossible, so why is it so hard to challenge the feasibility of Duterte making all cities as safe as Davao?

If you’re going to vote for Duterte, then fine. We will agree to disagree. But please vote for him on the belief that he will grow up and mature in office. Vote for Rody Duterte 2.0, a candidate who can bring order and discipline while respecting our fundamental human rights. A Rody Duterte that understands why unapologetic womanizing is two steps back for feminism.

If his most ardent supporters don’t call him out on his flaws, then who else will he listen to? Defending his flaws empowers him to say, I was voted in because of being a womanizer instead of in spite of being a womanizer. It legitimizes what is blatantly wrong. To quote Dante Alighieri’s Inferno, “The darkest places in hell are reserved for those who maintain their neutrality in times of moral crisis.”

So I’m not asking you to vote for Roxas, Poe, Defensor-Santiago, or Binay. All I ask is that you accept constructive criticism thrown your candidate’s way. If and when you tick the box that says Duterte, Rodrigo on Election Day, please make your vote mean: “Yes, with reservations.” – Rappler.com

Marty Gonzaga is a self-deprecating corporate sell-out, fresh out of UP Diliman. When he isn’t furiously replying to Internet trolls, he’s looking for love, stuffing his face with spaghetti, and consistently failing to achieve his healthy living goals. You can follow his parody Twitter account at @DilimanConyos.

This article first appeared on the author’s Facebook page.