Sep 18, 2016 11:00 AM PHT
Joy Aceron
Facebook Twitter Copy URL
Copied
The testimony of Edgar Matobato is rich with information that have policy implications and can therefore aid future legislation On September 15, 2016, the Senate committee on justice and human rights reconvened to continue the legislative inquiry into the alleged extrajudicial killings surrounding the ongoing war on drugs of the Duterte administration. To date, 3,526 people have been killed from drug-related police operations and vigilante killings.

In the hearing on Thursday, Senator Leila de Lima, committee chair, presented a new resource person by the name of Edgar Matobato.

Matobato claims that he was a former member of the “Davao Death Squad,” a vigilante group based in Davao accused by human rights groups of killing hundreds of suspected criminals in Davao during the time of Rodrigo Duterte as mayor. Note that Matobato was enrolled in the Witness Protection Program (WPP) in 2014. The program does a background check before they take anybody in.

Inquiry, not a trial

We need to be clear about one thing: trial is one, inquiry is another. The Senate is conducting an inquiry, not a trial. The Senate is not inquiring to determine who is guilty or not. It is inquiring in aid of legislation.

An inquiry is like a research. In research, how do you validate your facts? One way is through triangulation. Validate the information you already have by checking other sources: related literature or secondary materials, other key informants.

Because the Senate is conducting an Inquiry, Matobato is a resource person or a key informant. The fact that he is an assassin makes him a good resource person to understand vigilante killings.

When one is doing a research, you do not start from scratch. You read materials about what you are researching. If you read related literature/secondary materials like reports, what Matobato shared fits the narrative. You take it in as a lead to get more information to understand the problem and post solutions. Related secondary materials like reports of human rights groups, papers on Davao/Mindanao history, and the study we conducted that I mentioned in this post are additional points of reference in inferring these points.

The testimony of Matobato is rich with information that have policy implications and can therefore aid future legislation. The testimony, for one, is very useful in terms of understanding the anatomy of gun-for-hire groups using as a case the Davao Death Squad (DDS). If analyzed more carefully, it can give us an idea of how to more effectively stop the creation and operation of death squads: what are the gaps in our laws and the capacity needs of relevant institutions. 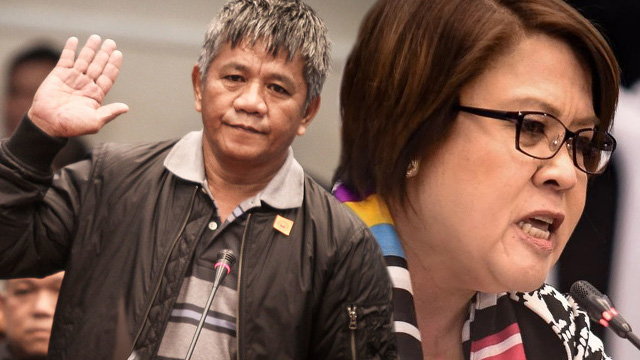 Below are some points from Matobato’s testimony that can be looked into more closely in coming up with possible policy or institutional reforms moving forward:

1. A death squad is able to operate without being caught nor reprimanded by the police with its goals aligned with that of the government’s (e.g. summary execution of criminals). This is because it is usually headed by a security officer, who is close to the big boss, who in turn is a government official with a vision or policy to carry out. In the case of DDS, it is reportedly headed by a police officer in Davao and the big boss was the mayor, former mayor, and now president, Duterte. It is good to review the generic appreciation of command responsibility and what level of vigilante killings can already be taken against  the duty-bearers in a given constituency.

2. There are death squad members who are police officers, but the other members are civilians who usually come from civilian auxiliary units/militias and rebel returnees. In a study conducted by the Ateneo School of Government (ASOG) on election-related violence in 2009, we already noted that private armed groups get their recruits from these civilian auxiliary units/militias and former rebels, hence the need to study the relevance of government programs targeting these players.

3. Death squad members can be financed through public funds by becoming ghost employees of the government. According to Matobato, DDS members are “ghost employees” of Davao City Hall receiving between P15,000 to P30,000. Note that some time last year, the Commission on Audit (COA) reported that there are about 11,000 employees in Davao City Hall that could not be accounted for. This shows the link of violence and corruption, with one feeding into the other.

4. In the case of DDS, according to Matobato, there were more people who got abducted and salvaged than those who got killed/assassinated. The number of casualties of the current war on drugs could be more, and the reporting should also include missing people.

5. The police in Davao never successfully investigated/prosecuted any of the killings despite reaching thousands in numbers. There should be clearer and stronger accountability for government’s failure to investigate and prosecute.

6. Death squad members are doing multiple jobs for their bosses, including as household helpers, couriers, bodyguards, etc. Whenever they have no killing assignment, they do other things. They are all-around. This is consistent with our election-related violence study in Abra in 2009. In our study, we noted that the situation of private armed groups can be traced to lack of employment opportunities especially in conflict areas.

7. Those involved couldn’t get out anymore because they will be hunted down by their own comrades. Matobato wanted out and he was targeted. We need to improve our witness protection and ensure that those who will leave their illegal activities can be given due support and if possible, opportunities for redemption.

A recent article of the New York Times explains that countries fall into vigilante violence because of “a combination of ordinary human desire for security, coupled with weak institutions and desperate short-term thinking.” The problem is systemic requiring reforms in the system. Reforming and strengthening our justice system is an indispensable solution to it.

Accountability processes like the Senate hearing on extrajudicial killings can help us get to long-term systemic solutions. While politics is part of it, we will not be able to move forward if we focus only on the politics, while leaving behind the substantive policy-making part of the process. – Rappler.com

Joy Aceron is Director of Government Watch (G-Watch) and Political Democracy and Reforms (PODER), programs that aim to strengthen democracy in the country.