Oct 29, 2016 7:31 PM PHT
Ana P. Santos
Facebook Twitter Copy URL
Copied
'My passport may dictate which countries I can freely enter but it will never ever dictate how far I will go'

“I’ve never met a Filipino who could travel before,” he said, looking at me with interest.

It was many years ago. I was in a restaurant in Tel Aviv sitting with a group of overseas Filipino workers (OFWs). I had just finished interviewing a migrant mother who was getting ready to return to the Philippines after decades in Israel working as a caregiver.

My host suggested I try some local food and offered to take me to a restaurant where the cooks – also Filipino – were her friends.

I was introduced to the owner, who as a matter of pleasantries, asked what brought me to Israel. I told him I was actually on holiday in Amman, Jordan and took advantage of the visa-free entry for Filipinos. I had actually crossed the border by taxi, I laughed.

I thought that was the end of what I thought was a  friendly exchange. I was not expecting him to tell me that he had never met “a Filipino who could travel” and look at me like an oddity.

I didn’t even get what he really meant, and deciding to give him the benefit of the doubt, I let it pass. But he wouldn’t let it go.

He asked me what I did for a living. I told him I was journalist, and that seemed to answer his question.

“Oh, that’s why. Your paper paid for your trip,” he said.

“Excuse me. I paid for this trip myself,” I said pointedly indignant.

“Impossible. I’ve never met a Filipino who could afford to go on holiday,” he insisted.

“Well, how many Filipinos do you know? Seems like you don’t know many. Perhaps you haven’t traveled enough,” I challenged him, becoming more and more agitated but conscious of the mounting anxiety of the other Filipinos at my table.

That was the first of many incidents when my passport was called into question.

Over time, I have come to expect it already especially when I travel to certain parts of the world where racism and discrimination are common.

To be very clear, “expecting” is not the same as “accepting.” I say “expecting” to mean that I have  learned to come prepared with a rebuttal, a snarky sarcastic comment. I never let such a comment pass – doing so would mean implicitly condoning their discrimination and playing a part in normalizing it.

But there are times when it becomes especially heavy like when I am at a dinner party. On such occasions, my guard is down because I think I am in the company of friends who would do no harm. Even acquaintances, dictated by the tenets of social graces, would be careful to offend. In such gatherings, I feel I am protected by the unwritten social rules of conduct. 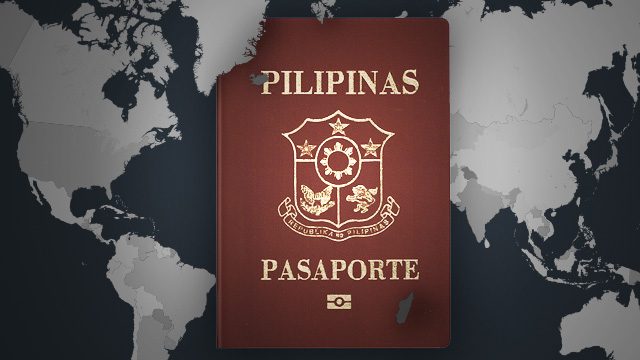 Sometimes I am proven wrong.

At a dinner party over the weekend, an innocuous discussion on favorite cities was interrupted by a woman who interjected and said to me, “Oh, but it must be difficult to travel with a Philippine passport.”

“I don’t have that problem,” I replied, stone cold.

“Oh, so you have another passport then?” she pressed on.

“No, I don’t. I just travel a lot,” giving short curt answers meant to convey my annoyance.

At some point during the dinner, the same woman asked my partner whose passport differs from mine, “Why would you even want to have a Philippine passport?”

With one eyebrow raised, I asked, “Why not?”

I had some much more to say and wanted to raise more than my eyebrow, but for the sake of keeping peace at the table, I left her with the discomfort of trying to answer my simple yet loaded question.

Others at the table mediated and the conversation was diverted to a less hostile topic.

Like I said, I do not let such comments pass.

While carefully calibrating my response, I do not attempt to mask my defiant stare or subversive tone. But I have to admit that it is in gatherings like this when I feel most restrained and trapped – compelled to tone down for the simple reason that we move in the same social circle and I will most likely see these people again.

That I continue to face discrimination in my social circle erodes at my long held belief that as long as I worked hard and made something of myself, my achievements and my integrity would be the measure of my character and not the color of my skin. That showing respect would compel others to give it and not try to make others feel small just so they could pacify their own insecurities and personal inadequacies.

It is precisely this belief system – this social contract I had with the world – that made me work so hard to rise above life’s circumstances.

Renewing this social contract between me in the world and trying to preserve my hope in it can be exhausting.

“Have you ever thought about just saying that you are Filipino but raised in the States? Or from another place – just to avoid all the other stuff?” someone asked me.

“No! Absolutely not. Never. I am Filipino and that’s all there is to it,” I said vehemently.

When we said good-bye that evening, he told me to keep holding up the Philippine flag and being me.

Oh, you betcha, I told him.

I am Filipino. Brown is the color of my skin and passport. My passport may dictate which countries I can freely enter but it will never ever dictate how far I will go. – Rappler.com

Ana P. Santos is a regular contributor for Rappler aside from this Dash of SAS (Sex and Sensibilities) column. Follow her on Twitter at @iamAnaSantos.