Subconscious bigotry: When you associate Muslims with terrorism Facebook Twitter Copy URL
Copied
I posit that in the deepest recesses of the non-Moro’s psyche, he has some distrust, hate, or even a feeling of separation simply because his Moro friend is a Muslim

I am a Moro, a Muslim-Filipino-Moro-Maranao from Marawi City. I have never been fond of the word Moro as it is a colonial identifier of my kind and I consider myself unconquered yet every bit Filipino.  But then, I cannot deny what I am; what history has classified me to be, a Moro.

Recently, in a group chat with non-Moro friends, we were talking about the tragedy that has befallen Marawi City, its invasion by the Maute Group and terrorism in general. One of my guys nonchalantly asked me: “How many terrorists are left in Marawi?” as if I had a Maute contact readily available on speed dial that I could ask.

I meekly replied: “I don’t know.” I mean, how could I possibly know? The government forces in Marawi had ordered the evacuation of the entire city and have kept all of the residents in the dark as to when it will allow residents to come back to their homes. Yet I was asked like I was a terrorist coddler, or connected to a terrorist cell, or a terrorist sympathizer. The person who asked me, I consider a close friend, and who probably meant nothing, My friend just wanted to ask how the city I hail from was doing under the terrorist attack.

Nevertheless, it stung me. It got me thinking. Thinking of the age-old issue of bias, prejudice, and racism and of bigotry that has long divided the non-Moro Filipino with the Moros, which had probably contributed to the immemorial armed struggle of the Moros in the Southern Philippines. I recalled history class and how the Spanish colonizers imprinted upon us Filipinos, as evidenced in obsolete history books, of Moros as pirates, bandits, and juramentados, unconquered as they were. The historical context vis-à-vis the ongoing siege in my hometown made me think about what the long-term consequences of the acts of terrorism done in Marawi City would be on ordinary Moro folks like myself.

In a Netflix stand-up comedy special of Hasan Minhaj entitled, “Homecoming King”, Hasan is an up-and-coming Indian-American comedian and a senior correspondent in The Daily Show. In his first stand-up special, he relates true stories of his life being born in Davis, California and how a Caucasian American girl named Bethany Reed and her family appeared to be accepting of him as a Muslim-Indian kid of immigrant parents to the US.

They welcomed him inside their home, allowing him to have study sessions with Bethany and eventually asking her to prom. Hasan later discovers that Bethany and her family turned out to be racist – particularly to Hasan, for being an Indian-Muslim. The racism Hasan experienced from Bethany’s family manifested itself only after they became close friends and what would eventually be the plot of the monologue.

Hasan philosophizes that a person could be smiling at you, befriend you, welcome you to their home, or even have a crush on you, and yet, unknowingly, be racist to your kind. Hasan concludes that a person may hate you just because you’re a Muslim without even knowing that they have that hate for you. It’s like the hate is buried deep in the psyche and may eventually manifest itself, even inadvertently.

To me, the phenomenon Hasan experienced can be described as subconscious racism/bigotry. That’s when you’re not aware of your bias, prejudices and discrimination of a people based on what they believe in.

The thing with this hate is once it manifests itself – like in the form of a joke, or sometimes an innocent question like what I personally experienced with my friend stings harder than apparent or conscious racism. It hurts more because what you thought of a person turns out to be wrong. I would go so far as saying that subconscious bigotry is the most dangerous.

See, many of the non-Moro Filipinos have probably met and had befriended a Moro. That because of long years of knowing each other, your friendship with the Moro dude had evolved into an actual long-term friendship. But I posit that in the deepest recesses of the non-Moro’s psyche, he has some distrust, hate, or even a feeling of separation simply because his Moro friend is a Muslim. The Moro friend is after all, different from you in that he believes in the Supreme Being as Allah, and you, the non-Moro, a Catholic, believes in the Holy Trinity.

But is it fair to have these feelings or thoughts of your Moro friend simply because he is Muslim? Is it fair to think ill of a person just because his religious beliefs are different from yours? Are these thoughts harmless and just simple biases that couldn’t hurt? Doesn’t our thinking influence how we act? Don’t we somehow unconsciously associate every Moro/Muslim we know with terrorism? Don’t we think that while the Moro person may not necessarily be an actual terrorist, his kind is responsible for all of the terrorism in the world? If we can at least admit that then we perhaps may inch forward to correct this injustice and avoid misplaced discrimination like legislating special IDs for Muslims or not providing enough aid in Marawi City. 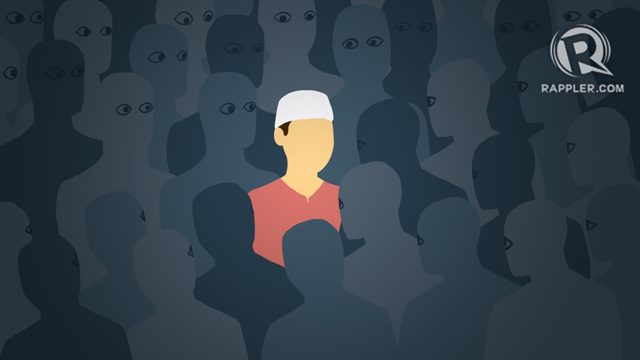 First, the Moro dude you chanced upon in life, met in school or in work and had befriended, in all likelihood has nothing to do with terrorism. And yet you may subconsciously associate him with terrorism. You probably subconsciously feel that the guy named Abdul or Muhammad selling biryani rice and kebabs in your local Middle Eastern restaurant, is probably either a trouble-maker, a no-good doer, an ill-tempered person who always gets into fights, or worse, an actual terrorist or terrorist sympathizer.

It’s been more that a month since lunatics invaded Marawi City, my hometown, and they’re still there. Wreaking havoc in the entire city, the siege led the President to declare martial law in the whole of Mindanao. And we have read much about the ongoing effects of martial law on the residents, soldiers, and victims of the siege. But let me tell you the conflict’s indirect effects on a Filipino-Muslim kid like myself living in Manila: the reinforcement of subconscious racism and bigotry against Moro Muslims, even Muslim converts.

Many like me have this experience. Once a non-Moro acquaintance finds out I’m a Moro from Marawi City, more often than not, I get an awkward look that makes me feel like a suspect of a crime. Like I had something to do with the problems besieging not only Marawi City, but also other parts of the world suffering from religious fanaticism. I’ve had the unsympathetic look that either “we had it coming” or we deserved the catastrophe we’re experiencing.

We’ve all heard “all terrorists are Muslims and therefore all Muslims are terrorist” openly said by bigots and racists. But for the subconscious racist who isn’t aware that he feels that way, the result is either subconscious discrimination or just plain apathy.

The crisis in Marawi City has been more than a month now. It pains me to say this but I feel that a lot of Filipinos do not care about it. I suppose the majority feels like the Marawi people had it coming as President Duterte claimed in a press conference. But I stress, and it is ridiculous for me to say this, that I am innocent, that my people and I had nothing to do with the tragedy. The majority of us have never killed in the name of religion or have ever identified killing infidels as Islamic. That is not the view of the Muslim majority of Islam; it is not Islam at all.

I wonder if the many subconscious racists and bigots have ever personally experienced being a victim of terrorism? I have and I wouldn’t wish it upon anyone. My family home in Marawi had been ransacked, stripped of valuables, left in disarray and abandoned for other thieves to scavenge on. I can’t even complain because compared to others, I am the lucky one since many of the Marawi residents have it worse.

Some have not only been robbed, their homes, made of concrete structures wiped flat as a result of carpet-bombing. Worse, others have lost loved ones, jobs, livelihood, schooling of their children, etc. And the second reason I can’t complain is because I know that subconsciously, most Filipinos think that it’s our fault for allowing terrorism to happen in their land, as if we aspired for whatever is happening in my hometown to occur. We supposedly deserve it because we are Muslims.

Some will deny that they are subconscious bigots, but the evidence to support the theory is more than apparent. Non-Moros just have to ask if they had posted #PrayforLondon when terrorism struck London Bridge or #PrayforBrussels after the 2016 Brussels bombing. Worldwide outrage spread when those tragedies occurred and there was an outpour of support, both in actual aid and on social media.

It was considered “cool” to post a hashtag showing support for the victims of terrorism abroad. But have you ever posted anything on social media in support of the victims of Marawi when the siege happened? I think most of you haven’t. I didn’t see enough on my social media feed. But a handful (more like a “hand few”) did. Whenever I chance upon a social media post from a non-Moro Filipino praying for Marawi, seeking aid and contributions, my heart is filled with hope. Hope that there is still good in my fellow countrymen. Hope that some are aware, and more importantly, some care.

Many may deny being subconsciously racist and claim that they simply just don’t care much for social issues, especially with what’s going down in Mindanao. But if you think about it, for so many, it is so socially acceptable to sympathize with victims of terrorism and throw support for them when they are non-Muslims but when the victims of terrorism are Muslims, like the thousands of residents in Marawi City, they don’t give a damn about them. It’s simple. It’s subconscious racism/bigotry.

But if you think about it, Moros and Filipinos are of the same color. We both are brown. If we went all-out for the victims of Ondoy and Yolanda, why can’t we go all-out in support of the victims of Marawi City?

Wishing peace for everyone.

Abraham Ali Gutoc is a founding partner at Gutoc Coronel Uy Law Offices. He had lived the early stages of his life abroad in a Muslim-dominated country. In high school, his parents moved back to the Philippines where he lived in Metro Manila up to the present. Since his move, he has studied mostly in Catholic schools and has made friends with non-Moros all his life. His family hails from war-torn Marawi City.