[OPINION] Why academic achievements are not enough 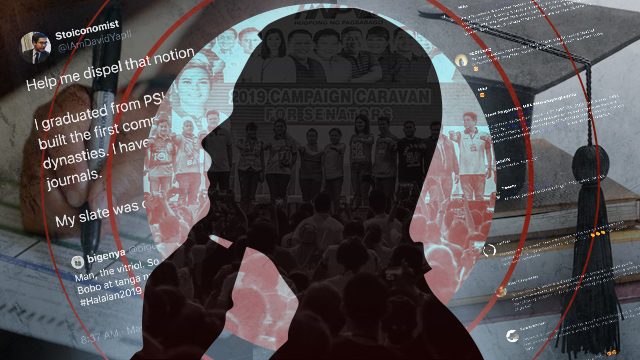 Facebook Twitter Copy URL
Copied
'Being an academic does not mean resting on our laurels nor turning our social media posts into our curriculum vitae. It means using knowledge in upholding the duty to be one with the vulnerable sectors in opposing oppressive systems.' Let me start by stressing what any observant person out there already knows: academic achievements do not equate wisdom.

In order to disprove the vitriol that those who voted for the Hugpong ng Pagbabago political candidates in Halalan 2019 are bobo (stupid), many took to Twitter to parade their educational accomplishments while being proud of voting for Duterte allies. (READ: [OPINION] The reality behind the midterm polls)

Help me dispel that notion.

I graduated from PSHS, UPD, and ADMU. I have a PHD. I built the first comprehensive dataset and model on dynasties. I have peer-reviewed publications in multiple journals.

My slate was comprised mostly of hugpong candidates. https://t.co/IVipYrRWik

The Twitter thread is composed of people declaring the degrees that they obtained, awards that they received, and votes they gave to pro-Duterte politicians. There are no explanations on how they came up with their votes nor answers as to why they are proud of their choices.

Aside from the dismal votes that are boasted about, the thread itself is problematic.

First, the statements reek of egoism. Certainly, nobody needs to say “I am an intellectual” to be considered as one. Intellectualism is not a label that can be donned and taken off to make oneself more relevant and more credible. It, too, is not a sure-fire shield against imprudence.

Intellectualism is a continuous exercise. It is the act of questioning and answering; of constructing and deconstructing; of challenging and being challenged. One must therefore be ready to expound on one’s position especially when he or she comes out behind the curtain of the academia.

Second, the thread poses more problems than what it aimed to address. The ones who voted for the Duterte allies should not be categorically labeled as bobo, which I completely agree with. Those subjected to the lower ranks of the socioeconomic ladder who voted for the Halalan2019 winners on the basis of popularity should not be called bobo, especially when a mainstream voters’ education is practically non-existent in the country. (READ: [ANALYSIS] The myth of the rational Filipino voter)

However, the above reasoning is nowhere seen in the tweets that come with the aforementioned thread. If anything, the thread exposes the fact that there are people who are worse than the perceived “bobotante.” These are the people who, despite their years of schooling, did not learn the values that make one human. Those who had the means to get an education but who still chose to vote for the President’s allies are not bobo – they are just plain rotten.

Third, equating diploma to wisdom is dangerous, if not downright foolish. Even when values education is taught in grade school, the current educational curriculum in the Philippines – and even in most countries around the world where neoliberalism thrives – does not include the teaching of empathy. One can get a Bachelor’s, a Master’s, or a doctorate degree without ever learning the skill of putting oneself in the shoes of other people. This is admittedly a failure of education that merits a discussion of its own.

But while academic certificates do not necessarily translate to the wisdom to know what should and should not be, it is crucial to emphasize that education and wisdom need to go hand in hand. One is as useful as the other and one cannot be fully utilized without the other. Therefore, the skill of information acquisition should come with the openness to understand more abstract concepts such as morality, rights, and justice, among others.

Fourth, the thread misrecognizes the duty that intellectuals and academicians have in trying times. The scholar is not just someone who gets by with titles that are often granted without the claimants’ comprehension of the weight of responsibilities that come with them. With the results of the latest national elections, the rollout of the Duterte administration’s contentious projects – federalism, war on drugs, relations with China, to name some – are now more possible than ever before. (READ: [OPINION | Deep Dive] Why the Senate race mattered so much)

The kind of scholars that the country needs are those who are able to discern which sectors of society are most vulnerable to oppression from government policies. And when it comes to understanding the plight of the marginalized, the academic that the Philippines should see is the academic who is progressive – the professional who is political. One should not set oneself up as a scholar if he or she refuses to recognize the moral responsibility that scholars are faced with, especially in the Philippines under the Duterte administration.

The goal of writing this essay and listing the things I find problematic in the thread is not to have an echo chamber in the academe. All scholars certainly do not need to have the same views on various social issues. The goal is to invite a reflection on what it means to be an academician and then subsequently act on these reflections.

As for me, being an academic does not mean resting on our laurels nor turning our social media posts into our curriculum vitae. It means using knowledge in upholding the duty to be one with the vulnerable sectors in opposing oppressive systems. Ultimately, being an academic means being progressively engaged to making society even just a little better. – Rappler.com