[OPINION] Shouldn’t we call ourselves ‘martial law babies’ too? 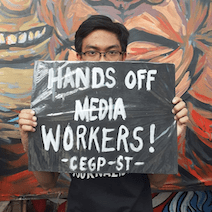 My birth came 16 years after the first People Power uprising in EDSA overthrew Ferdinand Marcos. Certainly, it appears uncanny for someone as young as myself to discuss something as far from our own generation as Martial Law, but we actually have our own martial law stories.

Allow me to start off with a family recollection. Friends and classmates alike grew astonished every time my own articulations on sociopolitical matters bordered on the bizarre – whether it was on Cory’s Mendiola debacle, Ramos’ scandalous Amari deal, or Marcos’ tyranny. I became a political enthusiast – and a staunch Marcos critic at that – specifically because of my family origins.

I will never forget my late father’s stories on his young anti-Marcos activism, after I delivered an innocent question during Cory Aquino’s funeral march 10 years and two Presidents ago. Being an alumna of the militant League of Filipino Students (LFS), commonplace in his stories was active participation in rallies for 3 years, from Ninoy’s long funeral march to EDSA, to resolutely achieve the dismantlement of the US-Marcos dictatorship.

In fact, when activists from Bagong Alyansang Makabayan and LFS had already opened Malacanang hours after the Marcoses-Vers-Cojuangcos’ departure from the Palace, my father spoke of an unforgettable anecdote: him and his comrades running toward the Marcoses’ grand dining room, where they caught a glimpse of the dictator’s 20 years of pomposity and power.

I thought that was it, until my father’s death opened more pandora’s boxes of stories. Interestingly, my two grandfathers went opposite ways during the US-Marcos regime – my maternal one served as the personal chauffeur of Imelda’s powerful brother and Marcos crony Benjamin “Kokoy” Romualdez, while my paternal one both joined the National Federation of Labor Unions and, eventually, the militant Kilusang Mayo Uno, and led the urban poor organization Alyansa ng mga Maralita sa Taguig. (READ: Gone too soon: 7 youth leaders killed under Martial Law)

Consequently, and as a result also of his purported rift with Marcos crony Geronimo Velasco, he was jailed in 3 different Marcos stockades – Villamor Air Base, Camp Crame, and Bicutan Rehabilitation Center. While he did not endure torture and slaughter, his comrades did. My uncles, too, had their share of the anti-dictatorship struggle – marching down Liwasang Bonifacio or Mendiola only to face tear gas, screaming “Imperyalismo, ibagsak!” (Down with imperialism!) at the top of their lungs, gunshots in the air. They could have been arrested by the Metropolitan Command had it not been for their quick intuition, which led them to leave the protest scene right away.

These were the stories that defined my growth from adolescence to today. And I have become an activist, too. One thing is noticeable though: We’ve been fighting for and against the same things and enemies up to now. While in Marcos’ time, social media, smartphones, and Twitter were inexistent, in Rodrigo Duterte’s age the should-have-been-already-dead notions of martial law, fascism against citizens, and the Anti-Subversion Law are having their resurrection. (READ: From Marcos to Duterte: How media was attacked, threatened)

This generation may not have lived through the same fear of being swiftly arrested by the Metrocom for mere suspicion of radicalism, but thousands of poor Filipinos have been massacred already because Duterte’s mad “war against drugs” suspected them of involvement in illicit drug activities. Marcos’ Oplan Katatagan now resurfaces in Duterte’s “Whole-of-Nation” counter-insurgency handiwork Oplan Kapanatagan. This was patterned also after the imperialist United States’ model, rampaging the countryside the way Marcos did – through indiscriminate bombings in Mindoro, displacement of indigenous peoples, and countless trumped-up charges hurled against progressives for the “crime” of airing radical views and socioeconomic analyses.

Duterte’s Marcosian dictatorship manifests when press freedom and academic spaces are beleaguered by the military’s obsolete “anti-communist” tactic, when farmers receive bullets rather than land, and when Mindanao still resides under martial law. If Marcos had the US as his sole imperialist master, Duterte presently exudes a shameless servile attitude towards two imperialist masters – China and the US. And when the Marcos conjugal dictators built their longstanding empire through the edifice complex, Duterte aspires to impose his dubious legacy through an anti-poor Build, Build, Build infrastructure bonanza. (READ: [OPINION] Marcos and Duterte: Strongmen’s changing playbook)

While we’re at it, our generation also witnessed Imelda’s conviction for 7 counts of graft (without any imprisonment), the ascent of Marcos’ clan up today’s staircases of power, and the Marcoses’ distortion of history through the dictator’s thief-like burial at the Heroes’ Cemetery.

Our generation of activists now bellow in the streets, “Marcos-Duterte, walang pinagkaiba (are no different)!” Indeed, these twin fascists had never differed. Marcos’ history continues to unfold in our time, with old and new sets of vile actors playing the same horrific scenes in the political arena, endorsing and executing Marcos’ timeworn fascism model much to our chagrin – even as 47 years have passed since Marcos’ Proclamation 1081.

So, shouldn’t we call ourselves “martial law babies,” too? – Rappler.com