[ANALYSIS] Amid the coronavirus crisis, where have all the sin tax funds gone? 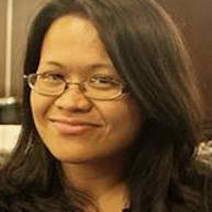 It is now accurate to say that the country is facing a crisis amid the COVID-19 outbreak. From having only 3 cases last week, it has now jumped to 33 – and counting. From the claim made by the health secretary himself that the Philippines was a model country for COVID-19 response, it is now a country that has just declared a state of public health emergency.

As it seems, the Philippine health sector is ill-prepared for the COVID-19 outbreak. This is not surprising after budget cuts, corruption allegations, politicization of health governance, and the political leadership’s focus on security – going after opposition politicians, activists, and poor drug offenders.

Health services deteriorating even before COVID-19

Late last year, it was reported that the health budget was cut by 10 billion in the 2020 general appropriations. This is despite emerging threats of measles, polio, and dengue outbreaks, which could be serious health emergencies. Last year too, there have been reports that health services in the Philippines have become more unaffordable and inaccessible to citizens.

It is therefore not a surprise that the first Global Health Security Index showed that the Philippines scored zero in a total of 5 health security indicators, namely: (1) linking public health and security authorities, (2) communication with healthcare workers during public health emergencies, (3) dual-use research and culture of responsible science, (4) biosafety, and (5) joint external evaluations and performance of veterinary services.

Yesterday, Duque admitted that the inadequacy of supplies and test kits negatively affects the country’s ability to effectively respond to COVID-19. Lack of proper and up-to-date health facilities and equipment, as well as serious understaffing, are putting a strain on the health care system.

An Al Jazeera report summarized it well: “The already low health budget was further cut resulting in less (sic) medical supplies, poorly maintained medical equipment, and understaffing. Even before COVID-19, the public health systems was (sic) already deteriorating.” As it seems so far, how the government has responded to the COVID-19 outbreak is real-time evidence of why the Philippines scored 0 in the said Global Security Index.

While we are not surprised by the news about the deteriorating quality of health services in the country, we are nonetheless puzzled. This is because the health budget was supposedly benefiting immensely from a so-claimed successful fiscal reform called the Sin Tax Law that has added a whopping P348.2 billion to the health budget since 2014.

In 2012, the Sin Tax Law (or RA 10351) was enacted (1) to generate additional revenue for health and (2) curb smoking and alcohol consumption by simplifying and increasing the excise tax system on tobacco and alcohol. (READ: Duterte signs new taxes on alcohol, e-cigarettes into law)

Generally, all assessments show that the law has achieved its intended objectives. Positive gains have been reported by government and civil society so far on the impact of the sin tax. There has been an increase in the health budget due to sin tax. The DOH reports that 43% of its budget in 2018 was contributed by the sin tax.

Increased revenues from the Sin Tax Law in 2013 have facilitated an unprecedented 57.3% increase in the 2014 national health budget, from P53.23 billion in 2013 to P83.72 billion in 2014. The bulk of the additional budget (P22.7 billion) was allocated for PhilHealth insurance coverage of the poorest families, benefitting around 24 million Filipinos. As a result, according to reports, there are more Filipinos, especially indigents, covered by PhilHealth.

The sin tax has been hailed as an effective tool to support health or a successful fiscal policy to achieve improved health outcomes. The Campaign for Tobacco-Free Kids (CFTK) concludes in its 2017 study that, “The Sin Tax Law has successfully reached its purpose of significantly simplifying the tax system, quickly reducing tobacco use, and raising high incremental revenue needed to fund universal health coverage – especially among the poor – as well as additional revenue for health and economic development programs.”

Data from the 2019 Sin Tax Law Annual Report shows that 55% of the DOH budget comes from sin tax revenues alone. This seems to mean that the decline in the health budget from the national government (on top of sin tax) has been dramatically decreasing, kept afloat only by funds from sin tax.

Revenues from sin tax are earmarked for specific programs: 15% to LGUs, 85% to DOH and PhilHealth. From that 85%, 80% goes to universal health care (UHC) expenditures (i.e. PhilHealth coverage; strengthening of preventive health programs towards attainment of MDGs/SDGs; health awareness programs; and implementation research to support UHC). On the other hand, 20% is meant for medical assistance; health facilities enhancement program (HFEP); and service delivery networks.

Some of the programs where sin tax revenues are supposed to go to are (1) health emergency preparedness and response, (2) epidemiology and surveillance (3) prevention and control of other infectious disease, and (4) health facilities enhancement program (HFEP) that primarily aims to upgrade health facilities and equipment. These are the very programs needed by the Philippine health sector in preparing well for health emergencies like COVID-19. 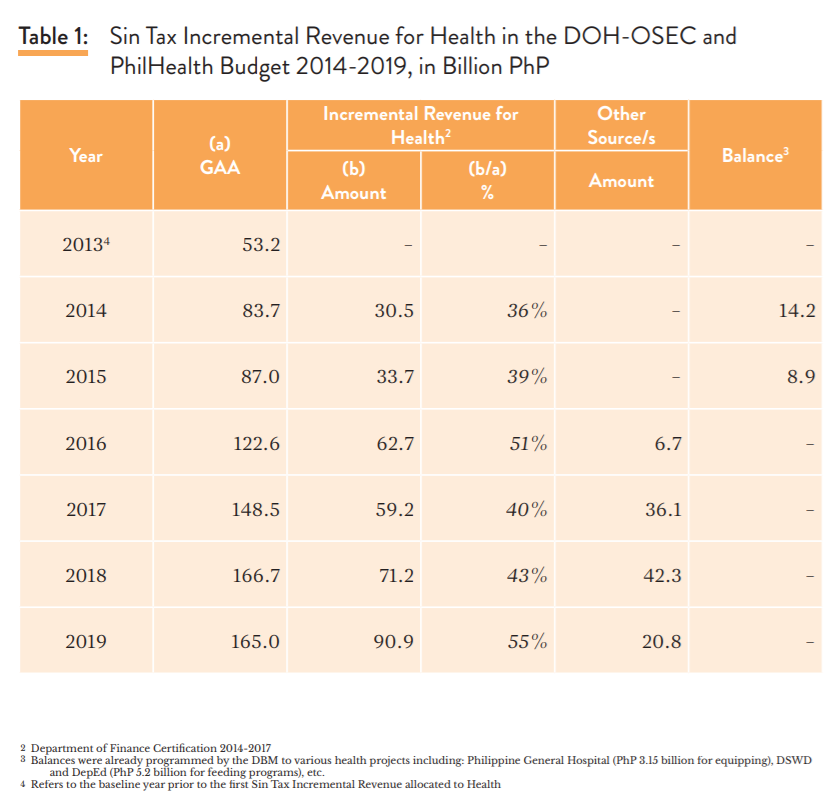 The deteriorating state of the public health sector, despite increases in its budget from a fiscal reform measure (such as sin tax), invites important empirical questions: What happened to the health sector? Where did the health budget from sin tax go?

An emerging lesson is that the success of fiscal reform measures (such as sin tax) are only certain to be true once tested. Its development impact must be seen and proven at the service delivery or citizen-beneficiary level. Fiscal reform outcomes can only come into fruition, such as the impact of sin tax on health services, if budget increases are ensured to have resulted in better quality received by citizens. This needs a monitoring and assessment system from the national level (budget allocation) down to the beneficiary level.

Without a working multi-level accountability system on public health service delivery, any additional budget (note: DOH/DOF is asking for loans to effectively respond to COVID-19) could just go down the drain without making lives better for Filipinos. Worse is if the success claims will catch us off-guard.

In the case of the ongoing COVID-19 outbreak, one indicative evidence of the success of the Sin Tax Law should have been a health system responding well to the COVID-19 emergency, providing quality health services and protection for Filipinos now that they need it most. Unfortunately, COVID-19 has unnecessarily caught us off-guard. – Rappler.com

Joy Aceron and Victoria Maglanque are from Government Watch or G-Watch, an independent national citizen action and research for accountability that is currently doing a study on the multi-level monitoring of sin tax financing of health.