The day the earth shook in Nepal

May 4, 2015 11:50 AM PHT
Leotes Lugo Helin
Facebook Twitter Copy URL
Copied
'I alternated between praying and screaming for my mom, while holding my son tight. My husband was hugging both of us. The house continued to sway violently. It felt like an eternity.'

One moment I was dancing and shaking to the B-52s’ “Rock Lobster,” the next moment the whole house was shaking. 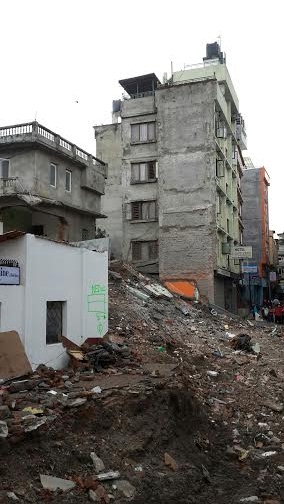 My husband pushed us away from the windows to the inner wall – our “safe wall,” we were told by the seismic engineer from the UN who inspected our house before we moved in. The shaking continued, accompanied by a loud rumbling – almost the sound of thunder. It’s this sound I will never forget.

Huddled next to the wall with my 5-year old son and my husband, all I could think was this was it: the dreaded earthquake we had all been fearing that would probably decimate most of Kathmandu Valley had finally come.

I was just waiting for parts of the house to crumble when I heard my dad shouting from outside, looking for my mom. Both were visiting from the Philippines. I could not hear anything from my mother who was in the kitchen. Fearing that she might have hurt herself, I kept shouting out to her. I alternated between praying and screaming for my mom, while holding my son tight. My husband was hugging both of us, protecting us with his body. The house continued to sway violently. It felt like an eternity.

When the tremor stopped, we all rushed out. My mom, who managed to dash out of the kitchen door, was sitting on the garden swing, looking all pale. It was only then that I realized I had slightly hurt my right knee and my son had a small bruise on the cheek. Expecting aftershocks, we huddled in a corner of the garden where we hoped falling debris wouldn’t hit us. Not soon after, the next tremor came. Again the rumbling sounded like thunder, followed by screams – ours and our neighbors’.

It’s hard to remember how many more tremors came after the first big one. All I could remember was that the earthquake alarm kept going off, followed a few seconds later by shaking ground and the rumbling sound. In between the aftershocks, my husband, our security guard, and I managed to take out the emergency kit issued by the office precisely for situations like this. I managed to grab my phone and the VHF radio issued to all UN staff.

My son would cry every time we entered the house, fearing for our safety. I had to reassure him many times that everything was fine – though I wasn’t really sure about it myself. 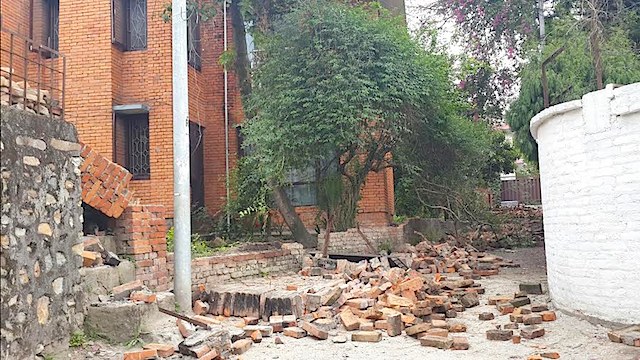 Coming from the Philippines where tremors are a common occurrence, I am no stranger to earthquakes. I had also lived in Tokyo. But I knew this was by far the strongest I have experienced. It seemed the houses in our neighborhood withstood the force – only the brick perimeter walls of some houses collapsed. Fearing stronger aftershocks, we asked our Japanese neighbor who had two young kids to join us in our garden as their brick wall had collapsed and they didn’t have as much open space.

I knew the mobile lines would be down so I turned on my VHF radio. In panicked voices, most UN staff reported they were unhurt but many said their houses were damaged. Some reported of buildings near or around them collapsing.

Then one of our Nepali neighbors came with more news: a tower in the heart of the city had collapsed, burying with it many people, perhaps 50, or over a hundred. A budget hotel in Thamel, near the office, had collapsed. The centuries-old town squares in Patan, Kathmandu, and Bhaktapur all suffered damages. Our security guard finally managed to contact his family. They were all safe with minor injuries but their house had collapsed. They lived in Bhaktapur which we found out later was one of the most affected areas in the Kathmandu Valley. 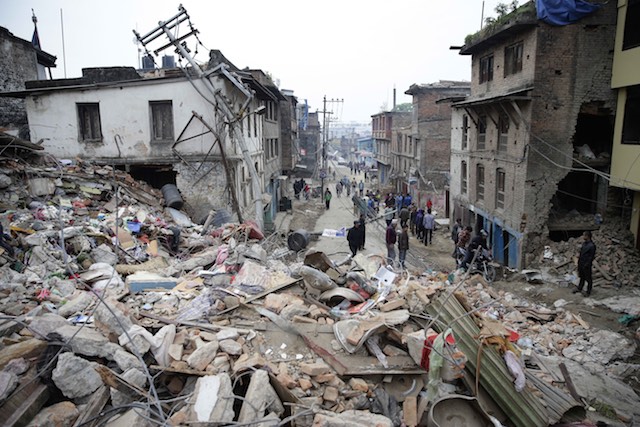 With a sinking heart, I knew then that the devastation from the earthquake would be massive – but just how bad, we still didn’t know. Then I remembered I had 3G. I turned on my work email. The office was now trying to account for all of us. I couldn’t get through to my other colleagues via the phone lines so I sent an email that my family and I were fine. I googled and saw the breaking news: 7.9 magnitude earthquake hits Nepal, reports of damage and some deaths and an avalanche in Mt Everest.

I realized I had to quickly send out word to our families in the Philippines and Finland and friends from around the world that we survived. This, before we lose the connection and the battery power on my phone. I quickly posted a note on Facebook which was good because our family and friends were very worried after seeing the news from Nepal.

The “great earthquake,” as it is now being called here in Nepal, struck close to noon, at 11:58 am to be exact.  It was a fine sunny Saturday morning. But the rest of the day was marred by the continued tremors, toppling buildings and houses, burying with them people and their precious possessions.

We spent a sleepless night in a tent and sleeping bags which came as part of our earthquake emergency kit. I’ve never been so thankful for having this kit, and also for the extra food and water we always stored in preparation for this day. 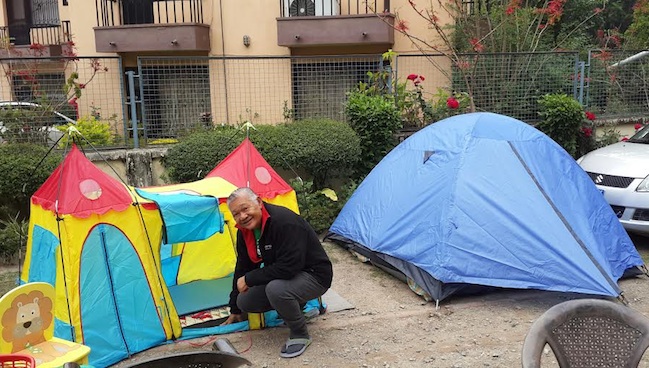 When we first moved to Nepal, one of the first things I learned was to prepare for the possibility of a major earthquake. The UN conducts regular simulation exercises so we know what to do. In fact, the day before the earthquake, we just had one exercise so my “go bag” filled with emergency supplies was ready. This preparedness definitely paid off.

The next day, with my husband and child in tow, we decided to head to the office to get more information and see how we can help. I was sure there would be something for me to do, UNICEF being the main UN agency to respond to the needs of children during emergencies. We saw the path of destruction on the drive from home to the office: houses with collapsed facades, temples in rubble, a high-rise mall with huge cracks on its pillars.

The office looked like a refugee camp. Many colleagues whose houses were partly damaged or just too scared to go back home were camping on the lawn. The good news was that all of us were accounted for. I also got word that the few Filipinos working for the UN in Nepal were all fine but could not get through to other members of the Filipino community here.

I went with a few UNICEF colleagues to the park in Tundikhel in the heart of Kathmandu, where many people were taking refuge. This was to make a quick assessment of the number of displaced people, how many of them were children, and what assistance they needed so UNICEF can provide the needed humanitarian support. 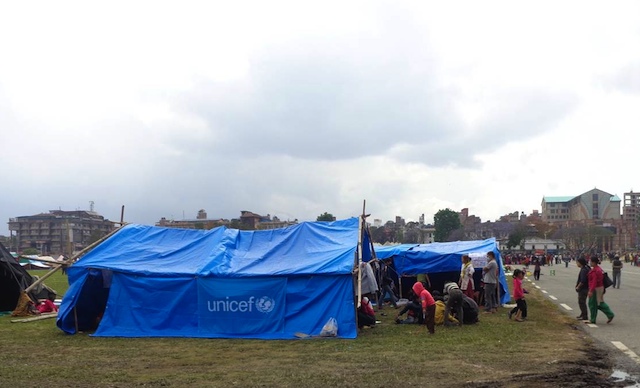 There were about 20,000 to 25,000 people in that big open space, some huddled under tarpaulin tents. Others used blankets to protect them from the sun, and many more just sitting in the open with little food and water. I was worried for them, knowing there was a forecast for thunderstorms that evening and the coming days. But they were just a small percentage of the affected population. Millions more were out there waiting for help.

Hours after the earthquake, UNICEF started mobilizing much needed life-saving supplies to get to the affected population.

We were in front of the oldest secondary school in Kathmandu – or what was left of it after the  big earthquake. I feared that the remainder of the building would collapse further; luckily it did not. It also made me think it was fortunate the “great earthquake” happened on a Saturday when schools were closed. Many schools in the affected areas of Nepal sustained damages with some districts reporting 80% to 90% of schools totally damaged.

More than a week after the April 25 earthquake, its impact has yet to be fully assessed. Government officials have been quoted in news reports saying the death toll could exceed 10,000, with many villages almost flattened out.

The Philippines is no stranger to calamities. We all know too well what is needed after a super typhoon, a flash flood or when a major earthquake hits. 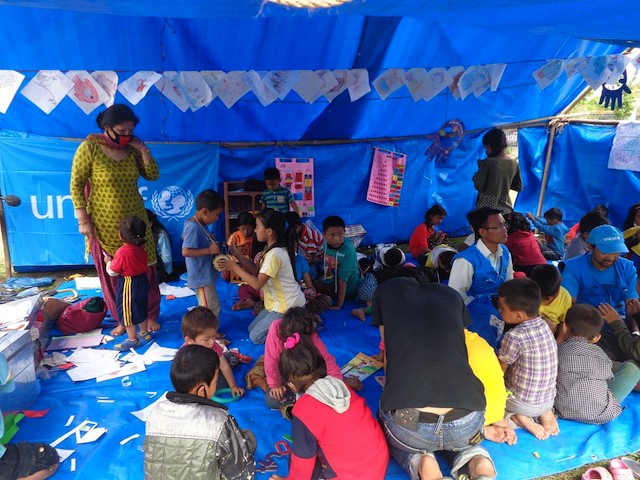 In Nepal now, we urgently need temporary shelter, water, food, medicines, and sanitation facilities and supplies for the millions affected by the quake. We also need secure child-friendly spaces where displaced children can play and learn, which will also aid in their recovery as it would take their minds off the experience and give them a sense of routine. Education needs to be re-started by reopening schools not badly damaged, and through temporary learning centers.

Nepal is already one of the poorest countries in the world. The Nepali people certainly need all the support they can get for relief and rehabilitation.

As for me and my family, more than a week after the earthquake we have moved back into our house but still sleeping on the ground floor. We originally thought our rented house was unscathed but structural engineers who inspected our house found some cracks where the exterior walls meet the ground. We need to find out more if these are superficial or has partly damaged the foundation.

We are still getting some aftershocks. I still jump at every loud noise. Even the sound of big planes passing by seem to rattle our house more than before. I don’t even know the difference anymore between having nightmares or experiencing real aftershocks. But in general, my family and I feel relatively safe again. We have food, water, and we have replenished our emergency supplies. We have been relatively lucky this time.

The sad part though is that millions in Nepal continue to suffer, particularly those in the countryside. They need the world’s urgent help now. – Rappler.com

To help support Nepal, please donate via the UNICEF website. 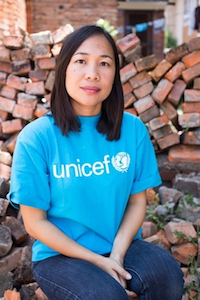 Leotes Lugo Helin is an education specialist with the United Nations Children’s Emergency Fund (UNICEF) Regional Office for South Asia. She lives in Kathmandu, Nepal, with her husband and 5-year old son. She is currently supporting UNICEF’s efforts to provide vital humanitarian assistance in Nepal, particularly to the millions of children whose lives have been torn apart by the earthquake and are in desperate need of life-saving support.