How to be a true friend to LGBT folks Facebook Twitter Copy URL
Copied
Don't claim to be a friend without taking the responsibility of friendship. This includes protecting your friends' happiness and supporting their lives

We are your coworkers, neighbors, classmates, relatives, and acquaintances. It’s becoming very hard to avoid us, and admit it – sometimes you even think we’re cool! I have no doubt there are those who sincerely want to befriend gay people, so here are some tips on interacting with our kind.

1) Don’t ask us how we became “that way.” Gays are just who they are. It’s not an abnormality or a disease that has a cause. Heterosexuality is not “normal” either. It’s just a more common occurrence.

3) Ask nicely. Don’t ask like you’re frustrated, or like it’s their job to explain to you who they are. If you’re a friend, you’ll get to know them gently, or try to understand on your own. If they resist your questions, back off like you would with any other friend.

4) Don’t lump everyone into one category with one conclusion. Don’t say “Bakit ba ganyan lahat ng bakla? (Why are all gay men like that?) or “Ang sensitive naman ng mga LGBT! Lahat na lang kinagagalitan!” (LGBT people are so sensitive! They’re mad at everything!)

5) Don’t apply one person’s answer and assume it’s the same way for everyone. Like straight people, each person is unique in how he or she lives their lives. There are no rules or guidelines.

6) If you can’t understand why we’re offended, that doesn’t mean we have no right or basis to be. If you are a true friend, you will care if you’ve offended your friend. You will not be annoyed when they are.

7) Don’t say that gay people should not be offended by something because if you were gay you’d be fine with it. You’re not gay, you have zero clue what it’s like to be gay, so don’t assume you know what we should feel because the truth is that you don’t, and you probably never will.

8) Just because nobody has ever told you that you’ve offended them doesn’t mean you haven’t said something hurtful about (and to) LGBTQs in the past. You have.

9) Before you ask or make comments, imagine the same words being said to you. Ask how you would feel if someone said you just need to try penis (or vagina)? How would you feel if someone said your marriage was against the law of nature? Ask yourself if you would be hurt if it’s assumed you are sexually aggressive, or feel scared if you’re always threatened with physical harm.

10) Don’t tiptoe around your friends’ partners, don’t say “special friend” or roommate, or best friend. If you’re unsure, just use the person’s name. If you want to know how to refer to a particular person in your friend’s life, just ask.

11) Do not ask a lesbian if she would ever “go back” to guys, as if being gay is a mutation and being straight is the default setting. It’s not. You just happened to be born in the majority. Yours is not the right path. It’s just a different one. 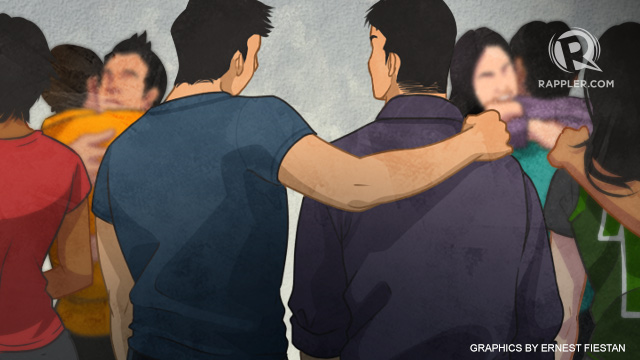 13) Don’t assume that a gay person who comes out to you is out to everyone. Never “out” a gay person. You don’t know what risks they face at home, at work, or in their community. Don’t say that it’s okay to out them because they’re “obvious” anyway.

15) If you’re genuinely talking to a gay man or a lesbian, read up on the difference between gender identity and sexual preference. Liking the same sex does not change your gender in the way that liking bananas does not make you a monkey.

16) “Ay, hindi ka halata. (You’re not obvious.)” is not a flattering thing to say. Being gay is an honor, and when you say it’s good we’re not obvious, you say it’s better if we just “look straight” or if we keep hiding who we are. Most of us don’t aspire to be straight. Implying that being straight is better is offensive.

17) If you are friends with gays but believe that they should not marry, reevaluate why you deserve that commitment and protection but they don’t. Don’t use religious reasons because the Philippines is not a theocracy. We don’t base laws, rights, and benefits on religion. If we did then we’d make communion mandatory and criminalize contraception.

18) If you insist on depriving a part of society the rights and benefits you freely receive, say it to your gay friends’ faces: “I don’t think you deserve what all other citizens get.” Stand up to your gay friend and say, “You cannot marry because I don’t like how you look and what you do in your bedroom.” Be proud that you believe your friend deserves less than what you have. Explain to them what makes you more special and deserving of those rights.

19) When your friends run to you with romantic problems, simply be there for them. Don’t use it as an opportunity to convince them to become straight. If you’re a woman, how would you feel if every time you had a boyfriend problem, your friend’s solution is that you date ladies? It’s dismissive and hurtful to assume one’s sexual orientation is the cause of their unhappiness. Your broken heart is no different from ours.

20) Say sorry and mean it. Say, “I know I’ve said hurtful things in the past. I’d like you to tell me if I’ve offended you or said something hurtful about your community. I don’t want to be that kind of person. Please let me know if I accidentally say something offensive in the future.” Your friend will appreciate it.

21) Put yourself in our shoes. Before saying anything or thinking aloud, place yourself in the same position as your LGBT friends. Imagine you could never marry your true love. Imagine you could not own property with your life partner. Imagine being told from childhood that the way you act, speak, live, and love are wrong. Imagine being regarded as perverted, disgusting, or as sexual predators. See if you would take insults as lightly as you would like us to.

You don’t have to follow all these tips, or even care to be friendly or good to LGBT people. But don’t claim to be a friend without taking the responsibility of friendship. This includes protecting your friends’ happiness and supporting their lives. – Rappler.com