[OPINION] Food insecurity and the politics of codependency The logistical impasse created by the COVID pandemic has served as a wake up call, signaling symptoms of diseases that have been ravaging the global village. With global lockdowns being more of the norm rather than the exception in the past two years, historically unparalleled cessations of production, transportation, and consumption value chains have crippled economies across oceans and continents.

However, the disruptions of the global value chain caused by the pandemic is only one facet of this logistical crisis. Shifts in weather patterns across the globe due to climate change have limited the global market’s capabilities for production. In India, heat waves have ruined this year’s harvest, leading its government to impose a ban on the exportation of wheat while restricting sugar imports to 10 million tons. According to a study by Chinese scholars in 2017, every degree Celsius increase in global mean temperature would decrease the yield of wheat by 6.0%, rice by 3.2%, maize by 7.4%, and soybean by 3.1%.

Overheating economies across the globe and the record-levels of inflation that followed it have also led countries to impose restrictions on food exports. Indonesia and Malaysia, for example, have enforced limits on chicken and palm oil exports, respectively, in order to defray inflation through the control and stabilization of their domestic supplies. Monetary interventions through interest hikes by most central banks have also been largely ineffective in abating runaway inflation rates while contributing to further disruptions in the movement of capital.

Farm to table food insecurity in the Philippines 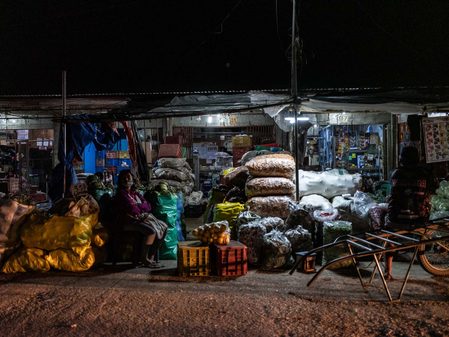 Furthermore, the continuation of Russia’s war of aggression against Ukraine has served as the most prevalent blow in these logistical impasse. Aside from the levied sanctions against the country with the 10th biggest GDP, disruptions on Russia and Ukraine’s supply chains affected the supply of almost an eighth of global calorie consumption, which has lead to the further debilitation of logistical channels in nearby regions such as in the Mediterranean and in the Middle East. It is also important to note here that the trade sanctions against Russia have also contributed to the global oil price hikes, as the country is one of the top producers and exporters of natural gas.

And while these factors contribute to the disruption of the global supply chains, the knee-jerk reactions of several countries to impose protectionist policies showed that the global village concept – which has been the predominant international policy direction for the last few decades – laid down the foundations for this crisis in waiting.

The triumph of the market economy and the rapid technological innovations that accompanied it have created a global village with unprecedented reach. The establishment of maritime shipping lines and the palletization of commerce have allowed the largely untapped natural resources of the third world to be manufactured in more industrialized nations. More complicated finished products such as smartphones, microchips, and automobiles became available in the shelves of countries that lack the capabilities to produce them on their own. The liberalization of finance allowed capital to move from one nation state to another, propped by the promise of more diversified portfolios and shared investment returns. Invisible global networks born out of the digital revolution have made communications and commerce accessible at the edge of fingertips.

In exchange for economic assimilation and the piecemeal rewards for being part of the global village, policy prescriptions were imposed upon less-developed countries. Control over these third world economies was orchestrated through the combination of economic diplomacy, development interventions, and deposition of regimes deemed to be anti-democratic. Examples of these methods of control were global policies on agricultural production and exportation prescribed by the World Trade Organization (WTO) which stunted the growth of domestic food production for third world countries, the Structural Adjustment Program imposed by the International Monetary Fund (IMF) for borrowing countries which liberalized the importation and exportation of capital in these countries, and of course, the wars in the name of democracy conducted in the Middle East and in other smaller nation states around the globe.

But decades after the imposition of these supposedly developmental interventions, third world economies are further ravaged by the consequences of these policy directions: severe exploitation and extraction of national patrimony by multinational corporations have squandered local communities dry, annihilated capabilities for domestic production created critical dependencies on importation, especially in key implements such as in food and medicine production, construction, transportation, and communication, while unstable democracies have made these nation states further vulnerable to massive corruption, routinary rebellion and regime change, and sycophancy to foreign influence and interventions. This massive logistical disruption at the surface level has exposed the vulnerability of economies that have been massively dependent on the importation and exportation of commodities ranging from food to microchips. The architectured co-dependency to the global village concept showed that no sovereign economy – whether net producer and consumer – is safe from the ill effects of these de facto policies. And of course, third world economies that do not have enough capacity to even feed their own population due to import dependency are more vulnerable to these crises.

With the inevitability of further deficits, it is necessary for countries like ours to review our reliance on foreign imports and create mechanisms for short-term contingency and long-term sustainability. As experts predicted the worsening of the food crisis in the next few years, it is of high time for our policy makers to revisit our roadmaps towards food security. And as our people bear the brunt of runaway inflation and sky-rocketing petroleum prices, a food crisis is something that we should not take lightly.

Decades of state neglect due to WTO and IMF-directed policy prescriptions have stunted the development of our agricultural sector. From its peak of 27.6% in 1974, GDP share of the agricultural, forest, and fisheries sector has shrunk to 9.6% in 2021. With vast farmlands and massive coastlines, we are still importing Filipino staple foods such as rice and galunggong from our Asian neighbors. We have vegetable baskets in the Cordillera but our farmers could not compete with smuggled vegetables that are apparently better equipped to reach our households from overseas. Potato farmers in Benguet struggle to bring their produce to larger domestic markets at a time when multinational fast food chains are rationing french fries purchases. Plantations in Mindanao, on the other hand, are geared to export coconut, banana, pineapple and other cash crops instead of catering to domestic demand. With a 31.3% poverty incidence rate, Filipino farmers remain in the poorest strata of society. And without sufficient government intervention, labor diaspora to more economically rewarding livelihood would further debilitate the agricultural sector in the long run.

The feasibility of President Marcos’ campaign promise to bring down the price of rice to P20 a kilo rests upon the determination of the new leadership to undo the damages of previous administrations to the agricultural sector. This is a herculean task, given that the Philippines has been the largest importer of rice in recent years since our rice production cannot compete with domestic demand and the lower price from overseas imports. The new administration must prioritize the impending food crises – and must do so without resorting to importation subsidies.

With confidence in the global village framework at an all time low, the whole world is scrambling on its feet to find replacements to the routinary and accustomed trade channels. Third world economies must find the political will, time, and resources to enact reforms and reconfigure their value chains in order to avoid gravitating towards either trade wars of their own or be plunged into worse logistical crises.

There are simply no alternatives. – Rappler.com

Reyzeljan Delos Trinos is an award-winning essayist and a policy consultant. He traces his spiritual roots in the mountains of the Cordilleras.