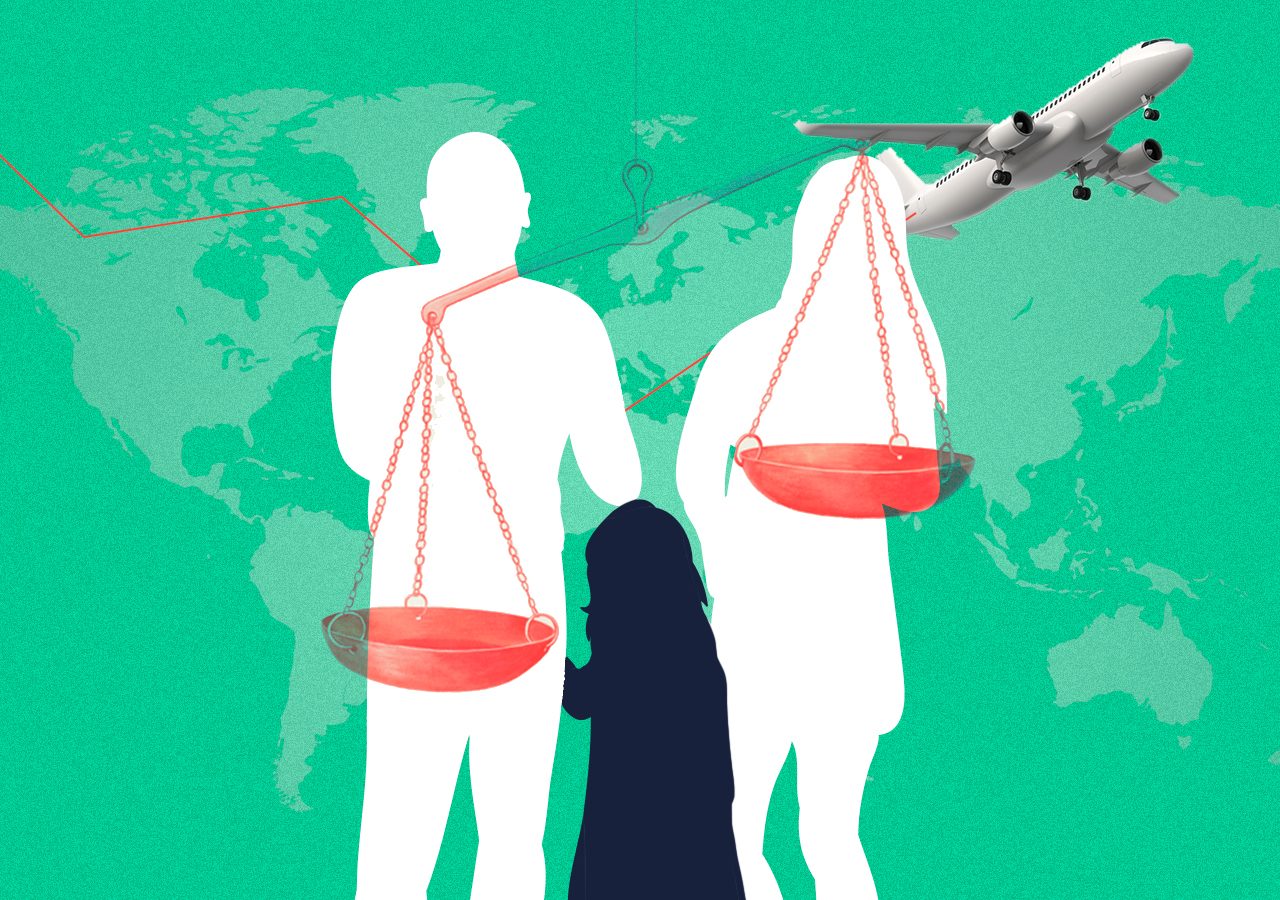 I never knew that being a lawyer was sort of like being a therapist, counselor, or religious leader. People come in and share their problems, and hopefully you can help them help themselves solve those. Sometimes you can only tell them to have faith in whatever higher power they believe in to intervene.

Children are often treated differently in both the administration of law and the court of public opinion. Unlike Canada, India, or many nations in Europe, where you can claim citizenship at any age by proving the bloodline of your grandparents or even great-grandparents, the basic elements of US citizenship by descent must be complete while you are still a child.

Once you become an adult, US law treats you differently, just like people would. This could be the difference between getting a blue passport or having to wait decades for a green card.

Interestingly enough, Philippine citizenship law is more like the rest of Asia or Europe (based on blood, not land of birth), but the administrative hurdles are the worst in the world. Despite being a relatively weak passport, ours is one of the hardest to get.

Son of the father

First-born sons often carry their father’s first names as their middle names. This is a throwback to old-time tradition, like how Jeffrey Michael Jordan carries his father’s name.

In story one, Jeffrey carried his father’s name and looks. His parents had met online, and his father would come back and forth from America to visit his mom. Since she was from a small city in Mindanao, they would usually meet in Manila.

Over time though, they had lost contact, and poor Jeffrey was just 6 months away from turning 18. On that date, he would always be Filipino by birth, but he could either be American or not.

The more commonly traveled road involves waiting for a decade or more for a green card, even if dad petitioned him right away. But if we could get everything proved before he turned 18, then he would be American from birth. He would have the right to travel to the US any time, live, work, and study here, and eventually bring his mom, too.

The rules vary depending on what year you were born, as the laws evolve over time. In Jeffrey’s case, since his parents were never married, and his claim was through his American dad, he had to prove their blood relationship by clear and convincing evidence.

Dad also had to meet certain residence and legal requirements, but the key was dad signing on to be financially responsible for Jeffrey at least until he turned 18. As you can imagine, getting a cold email from a long-lost love-child might be a shock. Not everyone reacts the same way.

It took a while to get him on board, but thankfully dad stepped up. In the end, he just needed to sign some documents and forms. Jeffrey’s mom also came through with the receipts documenting how they met, when and where they met, and other documents required by the embassy for his Consular Record of Birth Abroad (a CRBA is basically an American birth certificate issued by the US Embassy) and US passport applications.

By the way, it shouldn’t be surprising that the US Embassy in the Philippines is among the strictest consular posts in the world. Their checklist is intense. After sending the evidence for an initial screening, you have the choice of scheduling in Cebu or Manila. Cebu’s probably a more relaxed environment, but the wait times for CRBA appointments are months, vs. weeks for Manila.

By operation of law

Michaela’s story is a little different. She was born in the Philippines. As a nurse, her mom, like many others, came to the US for better opportunities. Eventually, after becoming an American citizen, she petitioned to bring her daughter here. Michaela came as a child, went to school here, and is now married with kids of her own.

The law on derivative citizenship has changed a couple times, most notably in 2001 (covering most people born on or after February 1983). Michaela’s case falls under the old law, but the basic requirements are similar.

A child who is admitted to the US for lawful permanent residence in the legal and physical custody of a US citizen parent (who meets certain residence requirements) is automatically a citizen by operation of law once the last of those requirements is met.

Usually this happens in one of two ways. The family could already all be in the US as green card holders. Once one of the parents naturalizes, all the green card holder kids (but not the other parent – that’s a separate application) automatically become citizens too.

In Michaela’s case, as a child whose US citizen parent brought her from the Philippines, the moment she was stamped in by Customs and Border Patrol at the airport, she was automatically a citizen too. They just had to prove the last prong – that she legally and physically resided with her mom as a child.

They also technically could have filed a DS-11 and directly applied for her US passport. This is done through the Department of State, a separate cabinet level department than Homeland Security (under which USCIS falls), although the Passport Agency under DOS often defers to USCIS’s judgement on these situations.

This situation cascaded in the worst way. Because she did not claim her US citizenship, Michaela had to keep renewing her green card. Although her status as a legal permanent resident does not expire, her physical green card did.

Living in a state with strict drivers’ licensing laws, that meant that her drivers’ license expiration was always tied to her green card’s expiry date. After her green card expired during the pandemic, this left her unable to drive, and unable to easily prove that she had the right to work in the US, despite having been a green card holder for decades, and legally an American citizen.

This was further complicated by her lack of documents. She and her husband like to keep their house clean, but that unfortunately included all old documents and government IDs. Since they threw everything away, they had very little of the evidence needed.

Once again, a mother who kept the receipts saved the day. After calling Tita and talking to her about their story, I quickly realized that they should have filed for Michaela’s certificate of citizenship and passport. Because it had been too long since her green card expired, we also had to file to renew her green card, so that she could then go to USCIS and get a stamp as temporary proof of her status to be able to drive and work.

As discussed above, the most important thing that we needed to prove was that she met the requirements of the law. We had proof of her mother’s US citizenship and even a copy of the petition that granted her legal permanent residence. The key was proving that she resided in her mother’s custody as a child. Although she was well over the age of 18, we still had to reach back to her childhood to prove it.

Thankfully, her mother had saved things like photos, yearbooks, report cards, diplomas, and more. It took some time to gather the evidence and even more time for the government to adjudicate, but at the end of the day, we were able to claim her US citizenship.

Because she had derived US citizenship by law from her mother and not sworn an oath of naturalization (which the Philippines considers to be abandonment of Filipino citizenship) herself, this means that she keeps her original Philippine citizenship and does not have to reclaim it.

Moral of the story

At the end of the day, there are roads less traveled that can skip the decades waiting for priority dates or the processes and expenses and forms along the way. If you do have a claim for US citizenship either at birth (from a US citizen parent) or through operation of law, you may be able to directly claim your citizenship like Jeffrey and Michaela did.

Be aware that you probably have to prove that all the requirements were met before your 18th birthday, although the rise of social media and the ease of taking time – and geo-stamped photos may make things easier for future generations. And above all – make sure you’re filling out the right forms. Government officers can’t tell you what to do – they can only approve or deny based on what you submit to them. Consider consulting a professional so that you can have an informed opinion about your options and those of your children, and hopefully your stories end happily ever after too. – Rappler.com

Jath Shao is the founder and principal attorney of the Shao Law Firm, LLC. Jath came to the US as an international student, then became an immigrant and then an immigration attorney before becoming a US citizen himself. The Shao Law Firm’s primary mission is to help immigrants and aspiring immigrants from across the country and around the world to navigate US immigration law. The Shao Law Firm also offers family law representation in selected states, as well as help with immigration to Canada and to the Philippines. Contact jath@shaolawfirm.com for any comments or questions.