[ANALYSIS] Trying to understand Filipino-American Catholics who voted for Trump Congress has confirmed that Joe Biden will be sworn in as the 46th President of the United States of America. The path here has been an agonizing wait for many, made more frightening by Donald Trump’s repeated calls for violence and numerous efforts to subvert the results of the November 3rd election. The January 6th terror attack on Capitol Hill, which occurred while Congress was meeting to certify Biden’s presidency, both shocked and gave me pause to reflect on how we, as a country, got to where we are and why some in our Filipino-American community supported Donald Trump.

Shortly before the 2020 election, a poll from AAPI Data indicated that approximately 34% of Filipino-Americans supported Trump. Although this is far below the percentage of White voters who supported Trump (58%) and is more in line with the Trump support among a minority of Asian and Latino voters (34% and 32%, respectively), I am left to wonder how some Filipino-Americans, as members of a community of immigrants and people of color, can vote for a president who ran on a campaign of racism, xenophobia, lies, and White supremacy.

How could Filipino-Americans continue to express support for an administration that has demonized immigrants, flouted the advice of the scientific and medical communities during the COVID-19 pandemic, and actively undermined American democracy through voter suppression and dismantling the United States Postal Service? I am especially perplexed to find some of these Trump supporters in my own family, a family of faithful Roman Catholics, immigrants (both documented and undocumented), nurses, and postal workers.

It’s been very difficult to pinpoint exactly why some Filipino-American Catholics, including my parents, support Donald Trump. Political conversations in the United States have grown increasingly polarized and I myself am often guilty of being unable to hear, much less understand, why Trump supporters feel as they do. And yet, when I have tried to enter into conversations with family members who support Trump, I am often met with nothing more than talking points that are parroted from Fox News or other conservative media outlets.

Family members, for instance, have stated that their support of Trump hinges on several key issues: abortion and immigration. As faithful Catholics, some in my family point to abortion as the primary issue that influences their politics. They believe that the Republican Party is pro-life and anti-abortion, and that the Democrats, conversely, are not. Of course, my family’s view against abortion is a reflection of the official stance of the United States Conference of Catholic Bishops (USCCB), who consider abortion as a “preeminent priority because it directly attacks life itself.”

Yet, I think part of the political and cultural crisis we find ourselves in is precisely because of this exclusive and reductionist approach towards the issue of abortion. Because the Catholic bishops treat abortion as the political issue, it naturally relegates other social and political issues to the back burner. What about racism, poverty, environmental degradation, police brutality, capital punishment, immigration, education, health care, and the myriad of other issues that affect human life and dignity?

Because of the USCCB’s singular focus on abortion, some Catholic voters look past these other issues and cling to the political propaganda that to be anti-abortion alone is sufficient to be pro-life. The migrant children separated from their families? The homeless on the street? Black victims of police brutality? They are considered as merely collateral damage in the Bishops’ single-issue crusade against abortion.

The issue of immigration is one of the most glaring examples of the corrupted Christian witness that results from a myopic understanding of what it means to be pro-life. When I asked my family why they support the Republicans’ anti-abortion stance but do not challenge the profoundly harmful and xenophobic immigration policies that have been enacted over the past 4 years, I was told that “illegal immigration is harmful for the people who came here legally” and that “Obama also locked up children.” It is a type of cognitive dissonance that categorizes one type of evil and excuses another, or at least rationalizes it because it was done like that before.

On this issue, I place part of the blame on the failure of leadership among the USCCB. In the wave of deportations during Obama’s and Trump’s presidency, not one single Roman Catholic Church offered sanctuary to an immigrant in danger of deportation, whereas other houses of worship did. This is a scandal when we realize that many of those seeking sanctuary are children of the Catholic Church.

[OPINION] The Fil-Am community has work to do 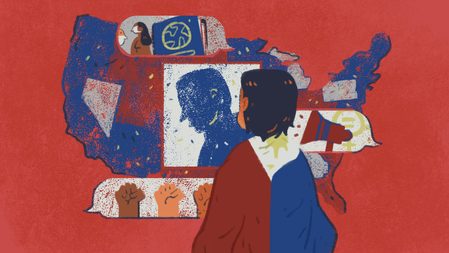 Ultimately, I think Filipino-American support of Donald Trump boils down to two reasons: an undeveloped understanding of Christian faith and, more insidiously, our proximity to Whiteness. For many Catholics, both Filipino-American and Americans as a whole, our spirituality is often formed in the faith of our early childhood.

For instance, although we pray the rosary and go to Mass each week, the meaning and the radicality of our faith are often lost in unexamined repetition. Do we actually contemplate what Jesus meant when he said, “Whatever you did for one of these least brothers and sisters of mine, you did for me (Matthew 25:40)?” Doing so will challenge us to reexamine our assumptions about Christian discipleship, our understanding of prayer and its implications for social action, and our relationship with God and with our neighbors. A mature faith calls us to transcend single-issue voting and to prophetically challenge politicians of all parties when their policies attack human life in all its stages.

The more sinister of the two reasons for Filipino-American support of Donald Trump rests in our complicity with and embrace of Whiteness. Some Filipino-Americans have bought into the values espoused by many in the United States – the values of rugged individualism, of exclusion, of wealth, and of White supremacy. This line of thinking is behind the reasoning I hear when people talk about “illegal” immigration: “If we could come here the legal way, then they should also.” This simplistic approach overlooks the brokenness of our immigration system, the damage wreaked by US intervention, the dire circumstances many immigrants, migrants, and refugees are in, and the policies that this administration has actively enacted which essentially foreclosed many avenues of legal and humanitarian immigration.

I find this to be a betrayal of our own history as a community of immigrants, never mind the fact that there are hundreds of thousands of tago nang tago (TnTs) or undocumented Filipino immigrants in the US. I have also seen this embrace of Whiteness in some Filipino-Americans’ lack of support for the Black Lives Matter movement. For some in our community, their values are expressed in an affinity for Whiteness rather than racial solidarity with similarly situated groups.

For me, 2020 has drawn lines in the sand and I have lost friends and acquaintances over politics. These ruptures are more difficult when it comes to family. Although I don’t see them wearing MAGA hats and Trump/Pence t-shirts, it is distressing and heartbreaking to know of their quiet but steady support of this administration.

In the end however, I take comfort in the fact that the vast majority of Filipino-Americans, especially those in the younger generations, stand for justice and equality. My uncle Allan, who lives in Sugar Land, Texas, a suburb of Houston and a Republican bastion, noted that the majority of Filipinos he knows are not Trump supporters. “These are first- and second-generation immigrants. They understand what it is like to come here and struggle.” When I asked him how he approaches the Trump supporters in our family, he said, “There’s no point in trying to understand or rationalize what these Trumpers do. To them, whatever he says is the be-all and end-all. It’s a cult. Rational thinking goes out the window.”

In light of the recent violence and sedition, it’s easy to despair and lose hope. As Catholics, our faith teaches us about the possibility of conversion. Although it might seem nearly impossible to bridge the political divide in the United States, I do believe in grace. I’m not interested in reconciling with the racism, xenophobia, and bigotry that has plagued American politics these past 4 years, and I am certainly not interested in an easy peace after the blatant display of White supremacy during the insurrection at the Capitol. However, I do want to hold the door open for family. As Filipinos, I think that’s what we do well. – Rappler.com

Christian Seno is a former Franciscan friar who left religious life after writing about racism in faith communities following the 2016 US presidential election. He is currently studying law at CUNY School of Law in New York City and is focused on immigrants’ rights and human rights.