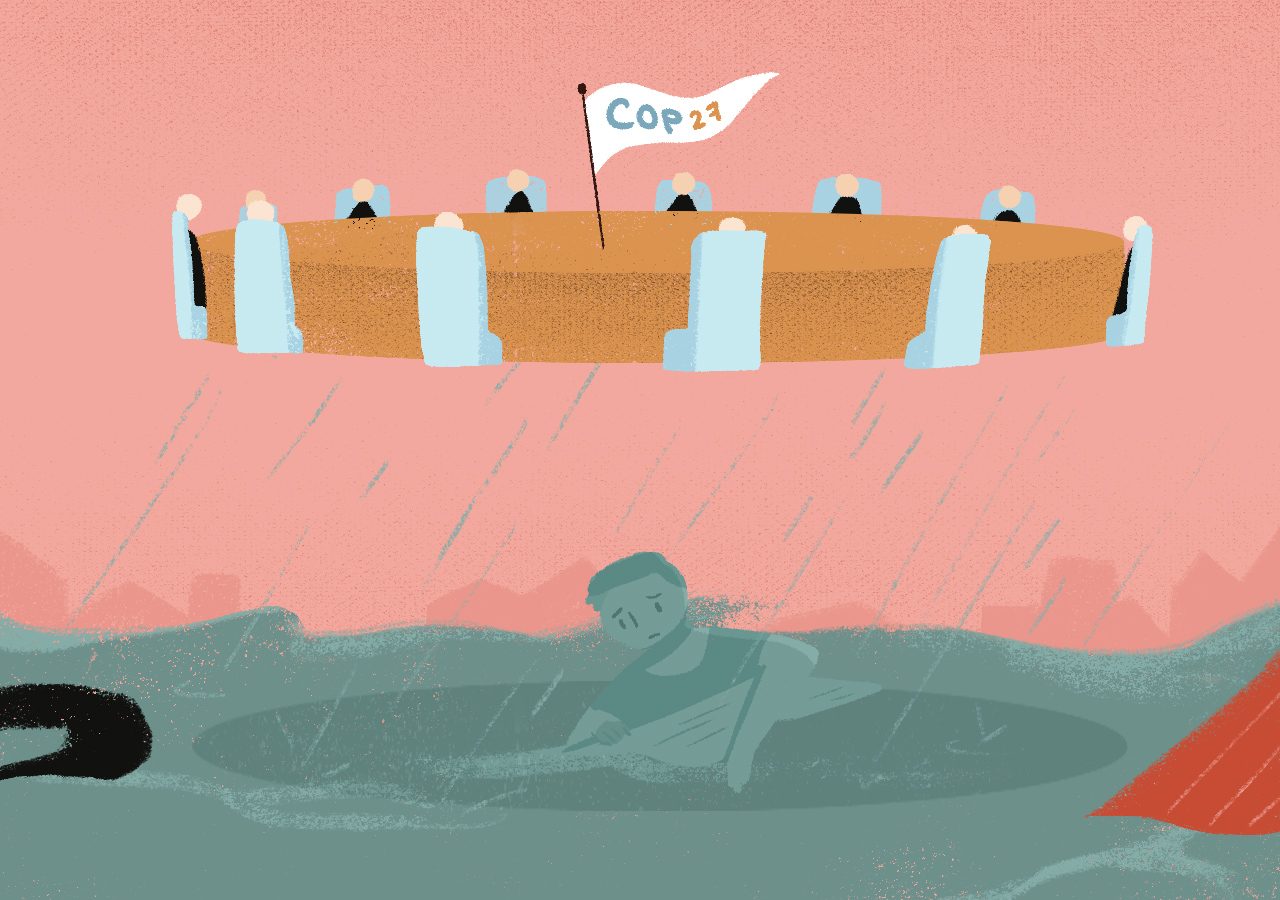 Facebook Twitter Copy URL
Copied
'Even Greta Thunberg herself was notably absent at COP27. Perhaps the act of inspiring had begun to feel futile.'

A few days after Severe Tropical Cyclone Paeng all but engulfed the entirety of the Philippines, the 27th iteration of the Conference of Parties (COP) began. There was a dystopian character to the unfolding of these events. In Egypt, world leaders, mostly men, gathered for a “family picture” in what seemed to be a brief pause amidst the politicking and the fruitless negotiations, all while our country finds itself reeling from the effects of another disaster.

In a discussion with another Filipino climate justice activist, she had revealed to me how MAPA activists, in the tradition of Greta Thunberg, are paraded in front of the world as beacons of an elusive hope. “They want Gretas to inspire them,” she said, indignant, “but my country is drowning. They can go and inspire themselves.”

Even Greta Thunberg herself was notably absent at COP27. Perhaps the act of inspiring had begun to feel futile.

I digress. How does one talk about COP27 and not think about how a dear friend had been displaced when Typhoon Haiyan devastated Tacloban, how her father had used a bed frame to create a makeshift bridge into their neighbor’s window, narrowly escaping the water rising beneath them, a fragile tether to life in a drowning city? How her sister had flown in from Manila in the aftermath, expecting to search for dead bodies among the mass graves, and instead found a family, alive but altered forever by the trauma of climate injustice?

How, indeed, does one talk about COP27?

As one follows the conference, there is a sense of climate change being discussed almost as if it were theoretical, a crisis that is approaching but has yet to arrive, one item on a long list of others that seem more pertinent, more brutal.

Filipinos present at COP27 gathered to commemorate the 9th anniversary of Typhoon Haiyan.

The UN Secretary General António Guterres said in his speech that we are on a “highway to climate hell.”

In the Philippines, we are already there. Not a literary device

Juxtaposed with the affairs on the global stage, realities of environmental defenders on the ground are vastly different. I write this from Negros Occidental, an island in the Philippines. The former is known as a vanguard of dissent in its many forms, and a place of heightened militarization. The latter is, by track record, the most dangerous place for climate justice activists in Asia.

Ours is a working class-led movement. At times, with P20 left in their pockets, activists would walk to and from meetings, hunger-stricken, and opt for coffee to mitigate starvation. With scarcely any operational budget, and the looming threat of abuse, they here have had to make do with very little.

And yet Negros’ climate movement has triumphed against repressive political dynasties and draconian corporations. With three coal projects halted in the ’90s, and more in recent years, one begins to ask how — and equally important, why.

They call the island the capital for renewable energy, the hope spot. With enough capacity to power the entirety of Negros, it stands as the perfect theater for staging a just transition, a template which the entire country could adapt. The irony, however, is that this capacity remains latent.

Perhaps why is best answered by the fact that it is clear that only two options remain: just transition, or death.

World leaders are fond of using figures to evoke emotion, as if we were literary devices instead of people, embellishments added to ensure applause, merely vessels for inspiration. Eight billion lives in peril. Amidst the collapse, the flooding, the banging on our doors — either by the agents of a repressive state or the unforgiving whip of another storm — the only space we were given at the fanfare of COP27 was within liminal cracks of statistics, our lived experiences narrowed down to data.

This is why we hinge our hopes upon people power. This is our how. The movement most recently won against San Miguel Corporation (SMC) through its subsidiary, Reliance Energy Development Inc. (REDI). The plan for a 300-Megawatt Liquified Natural Gas plant in San Carlos City was opposed by civil society organizations, communities, the church, and youth-led groups that clamored in a spectrum of strategic spaces. After months of groundwork, they withdrew their application for an Environmental Compliance Certificate (ECC) on the 15th of October, a document necessary to proceed.

The project is yet to be officially canceled, which means that SMC-REDI may attempt to apply for an ECC again. Yet this win reveals a titular truth: the language of resistance speaks clearly and eloquently, and it was heard.

World leaders would do well to remember that. Communities caught in the worst of disasters are those with less social capital and mobility, those in scanty structures unable to withstand the harsh whips of heavy storms. Such challenges are further exacerbated by gender. Women, particularly mothers, find themselves shouldering the risks to protect their families. These dangerous housing conditions intersect with socio-economic issues, threatening the livelihood of women whose financial opportunities are scarce to begin with, especially in rural areas.

A few weeks after a typhoon, I have conversed with families who were forced to deepen themselves further in debt for pieces of plywood, or had resorted to eating their own livestock to survive. Already struggling with housing instability and food insecurity, groups such as the LGBTQ+ community and PWDs are left to fend against discrimination in evacuation centers. Not only does dirty energy heat up the planet, but they also endanger the communities surrounding their plants, creating health and safety hazards on the ground.

At its core, climate justice is social justice. The day after our victory against SMC, we lined the streets alongside sectors that have borne the brunt of this crisis. They carried placards speaking not only of rage and grief, but also of the way forward. Climate movements around the world have adopted that phrase “no more false solutions.” We only need to look to the grassroots to find the true ones.

The sirens of the climate emergency are blaring, and it is high time for a just and rapid transition to renewable energy. Reducing to 1.5 Celsius is impossible otherwise. Yet it is a doorway through which we can enter into another world, one liberated from corporate capture, oppression, and the myth of economic progress – but we can only cross gently and justly. It is critical to center these marginalized sectors in seeking to reimagine entire economies. For it is their homes, their livelihoods, and their ways of life that cause them to stand in the front line of the climate fight.

If we do not heed them, the door will close. – Rappler.com

Jannele Jimenez is a writer, development worker, and environmental defender. She is a member of Youth for Climate Hope (Y4CH) and the founder and chairperson of Project LNT.

Bianca Ermac is an aspiring journalist, researcher, and the Chair for Communications of Project LNT.