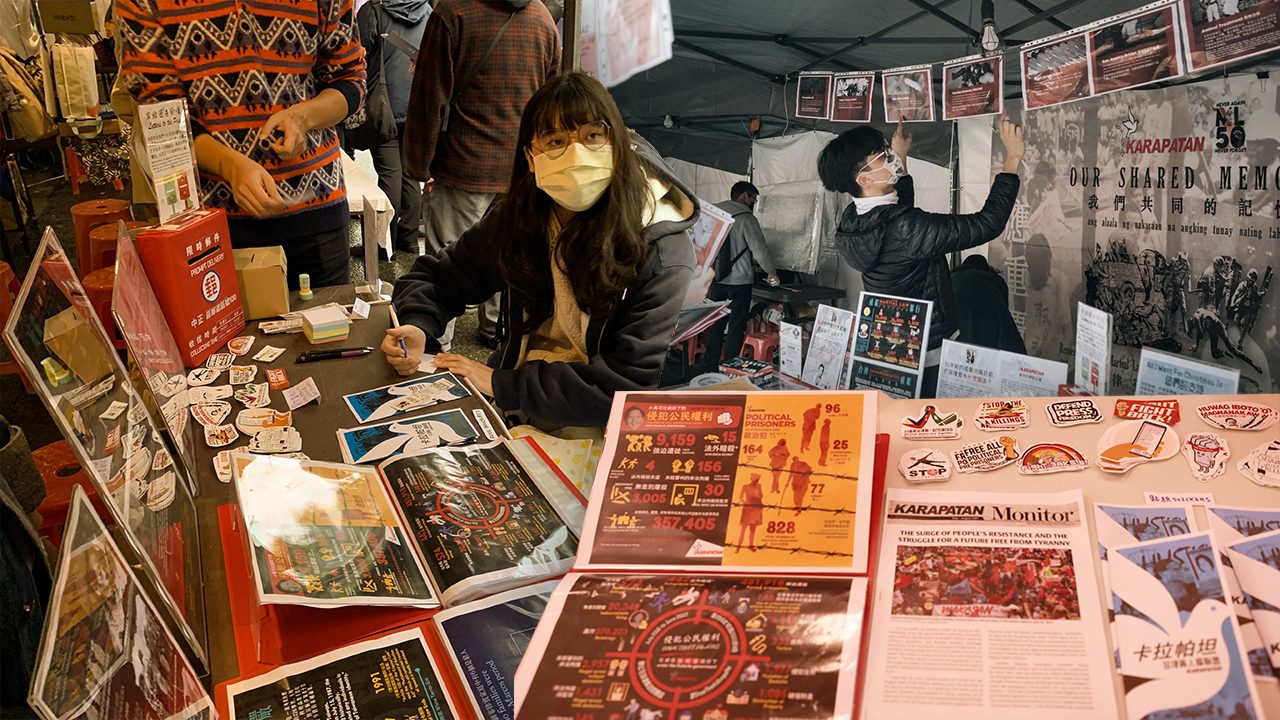 Facebook Twitter Copy URL
Copied
'Can one accept a leader who is from a former dictator’s family?'
foreword byGirard Lopez

White terror, suppression of media and free speech, thousands killed, tens of thousands more imprisoned and tortured, disappearances of people who dare to speak out against the government, and an iron-fist dictator. It sounds like the late dictator Marcos Sr.’s 20-year rule of the Philippines, but it actually also describes the period of martial law in Taiwan that lasted from 1949 to 1987 under generalissimo Chang Kai Shek.

Unlike the Philippines, however, Taiwan has worked tirelessly on “transitional justice” — ensuring the memory of Martial Law is ingrained in school textbooks and erecting memorials and museums about human rights advocates then. Furthermore, unlike the Marcoses, the Kuomintang (party of Chiang Kai Shek) has apologized for their state terror then and does not praise their own martial law or dictator. Taiwan offers the Filipino people a lot of great examples on how to confront our dark history and ensure it is never forgotten, as well as compensating the victims of Martial Law.

Additionally, we too perhaps offer Taiwan a warning unto what happens when a vast majority of the population forgets their history and do not stand vigilant against fake news and misinformation. The following is a reflection of my friend, Jasmine Wu, unto our International Law of Human Rights project for National Chengchi University’s International College of Innovation.

For two years now, we have been representing Karapatan, the largest human rights alliance NGO in the Philippines, at the Taiwan Human Rights Table (人權辦桌) held every December by the Dr. Chen Wen-chen Memorial Foundation and Museum (陳文成博士紀念基金會). Here, not only do NGOs from various advocacies promote their causes, but they also let people of all ages dine with survivors of Taiwan’s Martial Law period in an effort to promote dialogue between the young and old generations.

This year, my Filipino friend, Gino, planned our booth’s content to show the shared history of martial law in the Philippines and in Taiwan, so that we can stand in solidarity and learn lessons from both countries.

When I was learning about the history and how our governments deal with this past, I realized that our emotions or thoughts towards history can be easily shaped by the ruler, by how they want us to think, no matter if it’s Marcos Jr.’s way of trying to shape a positive narrative of his father’s era, or Tsai Ing-Wen’s emphasis on shedding more light towards the injustices of White Terror. Therefore, it is very vital to question everything, read more, and see in different perspectives, so that we will not be susceptible to being manipulated by the information presented in our eyes.

During the interactions with people who came to the booth, when we talked about the dictator’s son (Marcos Jr.) being the leader in the Philippines, I met several Taiwanese who mentioned Chiang Wan-an, thinking that Taiwan is heading towards the same situation as the Philippines. Chiang Wan-an is the alleged grandnephew of former dictator Chiang Kai Shek. There are still differences between us, however the similarities are still worth thinking about. It made me ponder the question, “Can one accept a leader who is from a former dictator’s family?”

To be honest, at first, when Gino told us about the content that we were putting in the booth this year, I was wondering why we had to let people know about Martial Law again. Wasn’t it a bit cliché and overly mentioned in Taiwan? But the more I learned about how similar governments have been under martial law, and how differently our current government is dealing with that past, it made me realize that I was wrong. I finally realized, to be reminded of those haunting tragic incidents again and again isn’t meant to fill our mind with hatred. Instead, it is to place fear:

A fear of history repeating again.

A fear of the truth being twisted.

A fear of the stories of innocent victims being denied and forgotten.

A fear of losing fear.

Fear is often viewed as a negative emotion for progression; however, fear shows what we have to do. Fear shows that we are paying attention and acknowledging the severity of the consequences if we didn’t fear.

Because, to paraphrase the words of Zig Ziglar, fear means: Face Everything And Rise. – Rappler.com

Jasmine Wu is an undergraduate student at Taiwan’s National Chengchi University (NCCU). She is an environmental and animal rights advocate with NCCU’s Green24 Sustainability Club.