Greed and the SEA Games: This week’s outlook

Nov 26, 2019 2:45 PM PHT
Facebook Twitter Copy URL
Copied
Are you one of the 'unpatriotic' Filipinos who griped and groused over the Philippines’ (lack of) preparations for the 2019 Southeast Asian Games?

In case you missed my newsletter last week on the 10th year anniversary of the Ampatuan massacre, here it is.

Are you one of the “unpatriotic” Filipinos who griped and groused over the Philippines’ (lack of) preparations for the 2019 Southeast Asian Games? The games officially open on Saturday, November 30, but last weekend, foreign and local athletes found themselves sleeping in airport and hotel lounges, changing clothes in buses, and – horror of horrors – seeing venues not ready to accommodate them for practices.

As Rappler has captured in these photos and videos below, nearly everything seems headed for a photo finish:

There are events that politicians simply cannot – and should not be allowed to – wing. As we lamented in the Rappler editorial on Monday, November 25: “We step into the big league and our officials are behaving like this is a barangay tournament.”

By end of day on Sunday, November 24, #SeaGamesfail had trended on Twitter – beaten by a large mile though by hashtag Cayetano, because the Speaker of the House and chief organizer of the games continued to blame the budget and the hotels and everything else for the mess. Cayetano has coveted this international event so much that, in his brief stint as foreign secretary, he tried to put the P7.9-billion SEA Games budget under the Department of Foreign Affairs. Recommended read: Why blame us, says hotel

Even presidential daughter Sara Duterte has chimed in, posting on her Instagram this cryptic note: “May I just say to everyone in Congress, ‘I told you but you did not listen so there you go.’”

It’s common knowledge that Sara had backed another candidate for the speakership in a bruising battle that even her brother, Paolo, tried to be part of before he was finally convinced to give way to Cayetano last July.

In the face of the SEA Games mayhem, Speaker Alan Peter Cayetano’s well-paid social media army unleashed its fangs anew, blasting critics for being unpatriotic and dragging, yet again, the opposition into a conspiracy to destabilize this government by supposedly destabilizing the SEA Games.

I think even the mighty Cayetano-Vince Dizon duo knows this cannot be trolled away – unless they’re drinking Sal Panelo’s coffee too. Cayetano and Dizon, who is Duterte’s lead for all government flagship projects and head of Bases Conversion Development Authority (BCDA), go a long way, with the latter serving as campaign manager of the Duterte team in the 2016 presidential elections. 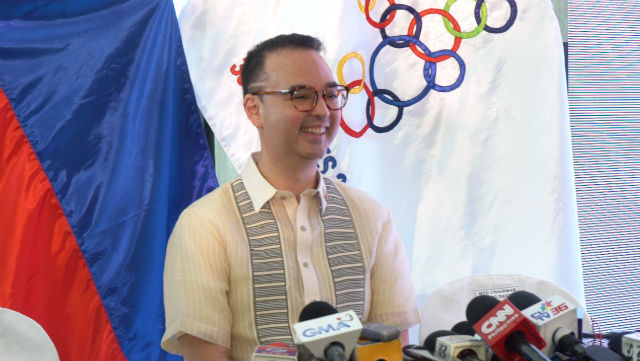 The original sin is apparent greed and lack of transparency, as shown in the delayed but heavily budgeted projects for the Games. Greed, of course, is no obstacle to success or efficiency. But in government, it is the lack of transparency that makes people and processes unravel in increments, piece by agonizing piece, forming the foundation not of a cauldron but of quicksand.

Transparency leads to accountability, and when public officials know that they will be scrutinized, they make sure to deliver. In contrast, if they choose to keep the nation in the dark over big items, somehow this will find its way to the public space.

Take the case of the contract to build the main SEA Games venue in New Clark City between the government-run BCDA and a Malaysian company.

We belatedly found out, thanks to information from disgruntled bureaucrats, that the office of the government corporate counsel had initially warned against a negotiated deal, but that Dizon managed to hurdle that obstacle.

Read the details of the joint venture here, and judge for yourself. Check also ourSEA Games microsite for everything you need to know about the Philippines’ biggest sports hosting in recent history.

Now how do we handle this moving forward? The only way to make things right,wrote veteran sports journalist Ding Marcelo, is to account for every single peso spent on the Games. “At the very most, we are paying for the Games and have a right to know where and how our officials are burning our taxes. At the very least, we don’t deserve to have anyone’s overpriced kaldero” frying us in our own grease, wrote Marcelo, who said that this is likely the most expensive sports extravaganza for the Philippines.

Speaking of stewing in one’s own juice, President Rodrigo Duterte, as expected,fired Vice President Leni Robredo from her fleeting post as co-chair of the government’s anti-drug coordinating committee. To be frank, it was a waste of her – and our – time in the first place, and it is best for the Vice President’s supporters to get past their own misplaced beliefs and embrace this for what it is:  there was nothing to be gained. Huwag nang pigain ang posisyong wala namang laman.

This week will however see more conversations about the Vice President’s sacking and more noise from the government as it seeks to manage the PR nightmare arising from the SEA Games preps. This is a government badly in need of good news this week, and the military delivered one on Monday, November 25: the “rescue” of kidnap victims Allan and Wilma Hyrons.

President Duterte is in Busan early this week for the ASEAN-Korea summit. On the sidelines of the summit, Duterte will meet with South Korean President Moon Jae-in, their 3rd meeting already. The summit begins Monday, November 25, and ends on Tuesday, November 26.

Rappler is holding a social media workshop again this week, on Wednesday, November 27, this time in Tacloban City. Rappler’s head of research, Gemma Mendoza, will be speaking about the power of social media. More in this story.

Other events this week

International day for elimination of violence against women

Have a productive week ahead! Feel free to email me atglenda.gloria@rappler.com.