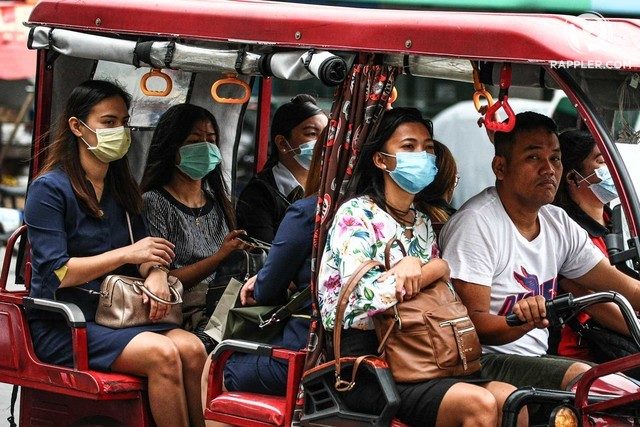 The response to the novel coronavirus outbreak is – and should be – the show of the central government, in any country. There’s no other way to confront the 2019 nCov-ARD since the epidemic has affected densely-populated towns and cities, even entire provinces or regions, across borders.

Yet in the Philippines, we see the national government bungle an initial advantage of the health department having protocols in place since the SARS crisis, and the opportunity to act decisively so those protocols could work unhindered by political considerations. (To stay updated on news, advisories, and explainers, check out our special coverage page, “Novel Coronavirus Outbreak.”)

The health secretary would rather not anger the Chinese government with a travel ban on mainlanders. The Senate President decides the best way to steer a hearing on shortcomings in the country’s response to the outbreak is to show a video alleging the virus is part of America’s biowarfare against China. The President – who once thanked Xi Jinping for “loving” the Philippines, and later declared, “I need China” – took time before ordering  the temporary suspension of visa issuance to travelers from China, Hong Kong, and Macau, and a ban on non-Filipinos coming to the Philippines from those 3 countries.

We could’ve done better. I realize this while in Tokyo, where, upon arrival, I was greeted by the news that the National Institute of Infectious Diseases had been able to isolate the novel coronavirus and could start developing a vaccine and drug, and a test kit. (On January 29, the Philippines also announced that it had acquired from Japan the primer needed to determine if cases under investigation are 2019-nCoV-positive.)

I also had to cancel a visit to Yokohama after the Japanese government announced it would quarantine a cruise ship that docked there carrying 3,500 people, including 538 Filipinos, one of whom are among the 10 who have tested positive for the virus.

Japan’s response wasn’t always the swiftest and perfect, but it has been quick to correct missteps and change tacks. It was among the first countries to repatriate its nationals from Wuhan, the epicenter of the outbreak in China. While it expects the 2019-nCov-ARD crisis to have impact on Japanese businesses both at home and in China (9.5 million Chinese tourists came to Japan in 2019, and there are 160 Japan-linked companies in Wuhan), the government decided it would be “putting all our energy into protecting the lives of our citizens,” Prime Minister Shinzo Abe was quoted in reports here. The central government makes decisions, the local governments get guidance from those decisions.

I see that top-down response in some other countries too.

In the Philippines, amid the uncoordinated response of national government offices, some local government units are doing their best with the information and resources available to them.

Here are the 14 cities and provinces in the Philippines with the most number of overnight travelers checking into accommodation establishments in 2018 (still considered partial as of May 2019). I list only those with totals running to the hundreds of thousands:

These are the localities where we expect more aggressive response to the health emergency, so let us know if you are familiar with situations in these areas. Aklan, for example, was among the first, if not the first, which was reported to have sent Chinese tourists back home. The provincial government and health workers aggressively tracked the tourists who shared flights or could have come in contact with possibly infected people and put them in quarantine facilities until national government specialists could get to them.

Bohol has set up isolation wards in its Governor Celestino Gallares Memorial Hospital and Don Emilio del Valle Memorial Hospital. At the Gallares facility, the provincial disaster response office has dedicated an ambulance for the use of the infectious disease monitoring team, and hotline numbers have been dedicated to the coronavirus response.

In Cebu, the governor signed an executive order placing the province under a state of preparedness. It is doing mandatory two-week quarantine of travelers from China and its administrative regions, and has designated 4 public health facilities to accommodate them. Cebu, if you recall, was where the first patient, a 5-year-old boy from Wuhan, was placed under observation and eventually discharged.

Negros Occidental and Negros Oriental, as well as Iloilo and Pampanga, while still free from the coronavirus, have stepped up preventive measures starting from their ports of entry.

There may be other local efforts we have yet to report about, but we see a pattern of provincial and city governments being a step ahead of national government orders or practically just switching on an already-prepared plan.

Our local governments stand in stark contrast against those in China, where the city government of Wuhan, for example, actively tried to downplay, if not hide, the discovery of the virus and therefore left its citizens vulnerable and delayed medical and emergency response.

Back home, we don’t subscribe to President Rodrigo Duterte’s dismissive attitude that the virus would just die on its own. For now, as long as our governors and mayors don’t think that way, we should be good. – Rappler.com