#COP21: A peek inside ‘indaba’ meetings of Paris climate talks 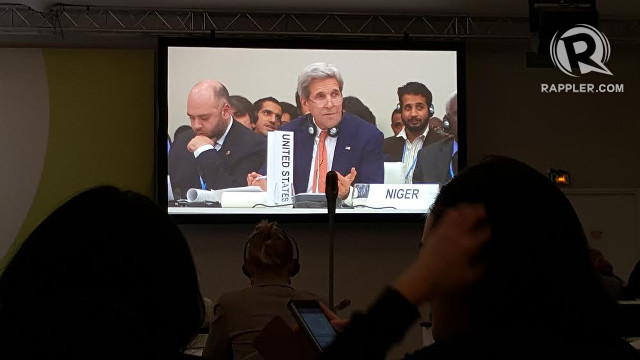 LE BOURGET, France – The French hosts of the crucial UN climate change conference in Paris (COP21) have been making use of an African way of achieving consensus and sharing ideas.

They introduced the indaba, a type of gathering practiced by the Zulu or Xhosa indigenous tribes in South Africa. The term “indaba” simply means meeting or gathering. An indaba is a meeting of leaders which is made open to a larger group of people even if the decision-making power rests on the leaders.

In an indaba, every leader gets an equal chance to say his or her piece.

On Thursday night, December 10, he called another one following the release of the latest draft climate pact. With many issues still unresolved on the eve of the supposedly last day of the summit, he named the meeting the “Indaba of Solutions.”

“This time, it will only be directed toward a compromise, an Indaba of Solutions. There will be a presentation of compromise on solutions. What is important is to seek landing zones on compromise,” he said at around 9 pm last December 10.

He asked all country negotiators to avoid giving general statements during this indaba to streamline the process and stay focused.

I, as well as another Filipina journalist, was lucky enough to witness this indaba, which began around 12 am on Friday.

Negotiators attending were functioning on only 3 or 4 hours of sleep. The atmosphere was one of urgency. Fabius skipped the usual general remarks and went straight to grappling with the remaining sticky issues in the draft: ambition, differentiation, and climate finance.

He opened discussions on each topic. When one country negotiator wanted to speak, effectively to give their country’s position on the matter, they only had to prop up their country name plate.

Most negotiators read prepared statements. Some were brief, taking only one or two minutes to say they appreciated a certain paragraph or had reservations about a certain sentence.

Others took much longer, rejecting entire paragraphs and suggesting wording of their own.

Some spoke in accented English, others in their own tongue, a sign for the audience and Fabius to put on their headsets through which translators did their best to keep up with the speaker.

The negotiators in that room were as diverse as the nations they represented. A negotiator from a Pacific small island state wore tropical flowers in her hair. There were negotiators young and old.

There were soft-spoken ones, those who peppered their statements with humor, even feisty ones who did not hesitate to call out other negotiators for their lapses.

Some were not even technically negotiators. Tuvalu’s Prime Minister Enele Sopoaga himself spoke for his country at the indaba. John Kerry, US secretary of state, lent his star power during the first part of the talks.

They each had their own stories to tell. The negotiator from Nepal said his nation was concerned about their “melting mountains.” Nepal is home to Mount Everest, the world’s tallest mountain and a bedrock of the country’s economy.

The man from Maldives said the agreement was a “matter of survival” for his people. They see their “beaches disappearing” every day.

But among the fascinating people there that night was Fabius himself. He seemed to exude an aura of gentle authority during the indaba. Though he was obviously tired, sometimes taking long to find the right words, he was generous in giving as many countries as possible the chance to speak.

In the words of Philippine negotiator Tony La Viña, Fabius is “making sure that parties talk together and try to solve the problem.”

Faced by roadblocks in the discussions, Fabius told countries most concerned with specific issues to go in a separate room and talk among themselves. He assigned “facilitators” to report back to the indaba after 30 to 45 minutes.

One of the indaba’s lightest moments was when Fabius said in English, “United Europe” instead of European Union. His faux pas elicited welcome laughter in a room full of exhausted delegation members. He was graceful enough to smile at his own mistake.

The indaba ended around 6 am on Friday without concrete resolutions but a promise from Fabius to meet again on Saturday.

The conference had to be extended by at least a day. Countries still have so much work to do and so little time to do it.

But hope remains while countries are willing to talk to one another. – Rappler.com