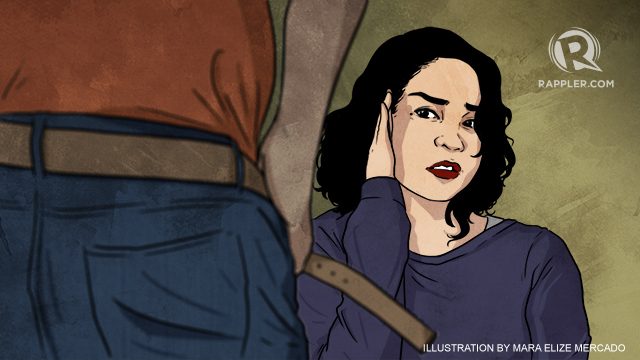 When I was 15 or 16, I rode a tricycle to get to my PE class on a bright, sunny, but still sleepy weekday morning. I had woken up later than planned, so the usual 15-20 minute walk from my dorm to the covered courts just didn’t cut it that day.

I boarded the trike (yes, we called it a trike) and was about to leave for the campus when a middle-aged man boarded the same trike and sat beside me. It was a pretty tight ride but I figured it was okay because the trike ride would last no longer than 10 minutes.

I asked the trike driver to stop just as we arrived inside the university campus, a good kilometer or two away from the covered courts where my PE class was going to be held. That morning, I was late for my PE class.

I have never told anybody about what happened. I do not know why.

When I was 22, I was assigned to cover the trial of alleged pork barrel scam mastermind Janet Lim-Napoles at the Makati Regional Trial Court. One of the many hearings I covered ended early so I decided I’d be “adventurous” that day and try commuting via jeepney instead of taking a cab back to the office.

I got lost, somehow found myself in the heart of Manila but eventually traced my way onto an MRT station (yay for the MRT, who would’ve thought?). I boarded the train on the Pasay station, girded my loins, and after hours of being lost in Manila, was on my way back to the more familiar streets of the Ortigas Business District.

Somewhere between Magallanes and Buendia, I felt a penis pressed behind me. It was hard to maneuver and find out who the asshole was (this happened during rush hour) so the best solution I had was to get down Guadalupe station even if the plan was to go down Shaw Boulevard station.

I posted about it on Facebook, had a few laughs with friends, but I was shaking when it happened. The LOLs on Facebook did not extend to real life.

A few months later, I was working inside a frozen yogurt shop at Greenbelt (again, after a Janet Lim Napoles trial). The place was pretty empty, save for separate groups of giggling high schoolers and forlorn-looking yuppies a few tables away.

A man, who looked like he was in his 50s, walked in the store and sat down. He was wearing what looked like a gym attire which didn’t really stick out. It was a yogurt shop, after all.

A few minutes after I filed my story (on the hearing, again), I had the feeling that something was amiss. From the corner of my eye, I saw the 50-something man, who was wearing gym shorts and a ratty shirt, whip his penis out for all to see.

I panicked, hastily packed my things and panic-messaged a friend to tell him what happened? His response? A long “HAHAHAHAHAHAHA.”

It took a while to realize I wasn’t laughing with him. He finally asked how I was a full 30 minutes after the penis-in-frozen-yogurt-shop incident.

I write this a few minutes after reading a post on Facebook about a college student who was sexually harassed while riding an FX from school. I write this because recently, a friend on Facebook said catcalling “historically” only happens to pretty and hot girls and that the non-pretty and non-hot ones shouldn’t be worried about sexual harassment.

I write this because I pride myself in being a young, #empowered and educated woman who speaks out against sexual harassment and yet – in at least 3 instances – failed to speak out precisely when it happened to her.

During a recent media forum in Germany which I attended, an interesting thing happened when a woman proposed that women be taught martial arts to combat sexual harassment. The moment she started explaining her stance, I felt (and saw) eyebrows in the room shoot up.

It’s true, they admitted, being skilled in combat doesn’t hurt. But beating a would-be attacker up won’t necessarily deter others from preying on women (and men) who might be less physically intimidating.

What hurts men and women is a culture that encourages and emboldens idiots, bastards and scum bags to think they’re entitled to a person’s body as if it’s theirs – as if consent is merely a suggestion.

What hurts is that we live in a world where victims and survivors are told “OA ka lang,” “take it as a compliment,” or “hindi naman yung pambabastos.”

The problem is never what the woman (or man) wore, how pretty/handsome the woman/man is, or what s/he did to make it seem like s/he “was asking for it.” The problem is that people think these details are relevant in cases of sexual harassment.

I write this because as each day passes, I feel as though we’re losing the war against rape culture because we’re letting another generation of Filipinos grow up in a world where catcalling is considered a compliment or where rape survivors are told they were raped because of what they wore or what they did.

It worries me that the rhetoric on crime prevention and public safety involves the claim that safety is best measured if and when a pretty woman can go out at night without fear of being raped (let me explain: because this reinforces the notion that physical attractiveness determines whether you will be raped. It does not.)

I don’t know how we’ll end this or if rape culture will ever cease to exist. I don’t know if I’ll finally be able to speak up the next time I encounter a rouge and unwanted penis. But this I know for sure: I will never get tired of writing about it, tweeting about it, or even speaking in public about it (if I feel educated enough).

This is a fight not between men and women but between all humans and a culture that encourages some to be inhumane. – Rappler.com