The President is a misogynist. Now what? 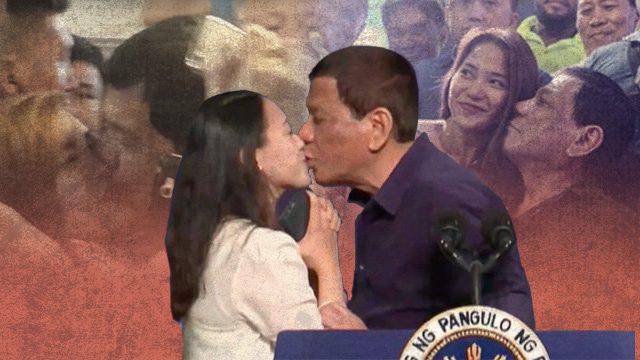 Facebook Twitter Copy URL
Copied
The President is never going to change. Sexism, for him, is a default. It's time for us to recognize, if we haven't already, that this country has put machismo in power. But we can change this.

Another speech, another egregious display of machismo from the sexist septuagenarian we call our President.

In an event overseas where Mr Duterte met with the Filipino community, books were given away. These tokens were received with handshakes and pagmamano (kissing of an elder’s hand). But for the most powerful man in the country, that wasn’t enough. It escalated to a buss on the cheek, to which one of the two women onstage complied.

When it came to the second woman, Mr Duterte decided, in front of a crowd egging him on, that he could ask for more. He started pointing to his lips. There were followup questions for the woman: Are you single? Will you tell your husband that this is just a joke? The woman initially hesitated, then complied, and the crowd went wild.

(Ironically enough, the book that the woman received in exchange for the kiss was Aries Rufo’s Altar of Secrets: Sex, Politics, and Money in the Philippine Catholic Church – a book that sheds light on the abuses of men in power.)

Damage control was fast. An interview of the woman involved was posted to Facebook. She said the President singled her out, but that she was happy about the once-in-a-lifetime experience. For her, she said, there was no malice involved – it was just a kiss to titillate the audience and it meant nothing to her or the President.

Many have insisted that the woman’s consent is the end of the discussion, dismissing the fact that there was a clear disparity of power between the two people involved, amplified by the fact that she was put on the spot in a public setting.

More than that, it’s about the use of the presidential power and influence to normalize the idea that a man is entitled to sexual favors and remarks, written off as jokes. This is a dangerous precedent to set, in light of vulnerable migrant Filipino workers at the mercy of their employers.

The Palace made flimsy excuses, saying that this was simply part of Filipino culture – hell, she was even honored by it! A senator has said this is no different from married actors shooting a kissing scene.

What seems lost on Duterte’s defenders is that this behavior is far from isolated for a powerful man, who has consistently normalized sexual advances in a professional setting. The President, a leader, should have acted accordingly. But he’s not known for acting accordingly.

In other gatherings, the President has catcalled a reporter, made remarks about the Vice President’s knees, staged several photo ops with women on his lap, and would occasionally make remarks or jokes about the appearance of women in the audience. He has made comments about shooting female rebels in the vagina – probably, to him, the only important part of a woman.

His pet project, the bloody drug war, is often justified by his supporters, citing the need to rid society of addicts who commit rape. Yet, in the same breath, they defend and laugh with him when he makes rape jokes.

As far as Mr Duterte is concerned, women are to be celebrated if they are beautiful, if they sit on his lap, and, married or not, if they acquiesce to his requests for lewd favors.

Duterte promised he would behave once he became president, just as he had promised us a jetski trip to disputed territory in the West Philippine Sea, and eliminating the drug problem and corruption in “3 to 6 months”

Those engaging in mental gymnastics for Mr Duterte refuse to acknowledge that the presidency is an office that is supposed to carry with it moral authority. His fans admire his candor and “authenticity.” Authenticity has become an excuse for tactless and unacceptable behavior. “He’s just like us!” they say, when we should choose leaders because they should be better than us, and not us at our worst.

The President is never going to change. Sexism, for him, is a default. It’s time for us to recognize, if we haven’t already, that this country has put machismo in power. The people under him will get even more creative at gaslighting us into believing that his pathetic antics are the norm.

Harry Roque has said this is acceptable in Filipino culture. In a way, he’s right. We live in a country where a woman in a public space endures leering and catcalling, and the best way to get back at a member of the opposition is to spread a fake sex video.

We can change this. We can call out sexist behavior from our peers and teach our sons the values of respect and consent. We can vote out leaders who are complicit. We can make sure that the next person to stand beind the presidential seal won’t be soliciting lewd favors. We’re better than this, even if the men we put in power clearly aren’t. – Rappler.com