Feb 20, 2019 7:00 PM PHT
Pia Ranada
Facebook Twitter Copy URL
Copied
All Rappler reporters, including provincial correspondents, have been barred from covering the President for an entire year. This sets a worrying precedent that threatens press freedom. 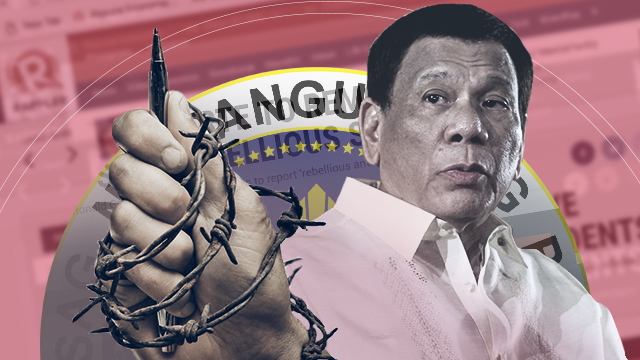 Exactly one year ago today, President Rodrigo Duterte ordered Rappler CEO Maria Ressa and me banned from Malacañang, and then from all his events and activities. This instruction was quickly expanded to cover all Rappler reporters and correspondents, even those based in the provinces.

A year later, this presidential order stands, though without me or anyone from Rappler ever seeing any document to serve as its basis. (READ: Rappler, NUJP ask Duterte to lift coverage ban)

I cannot enter Malacañang, even if I am a member of the Malacañang Press Corps. If Duterte speaks at a private event anywhere, the Presidential Security Group will not allow me in. Other Rappler reporters cannot cover any event if Duterte is present, even if the event is happening within their “beat.” When Duterte went to Cagayan in March 2017, our correspondent there, Raymon Dullana, was also barred from covering his event. The same thing happened with correspondents Jazmin Bonifacio in Tacloban and Rhaydz Barcia in Legazpi in 2018. So our provincial reporters, too, cannot enter a venue, even in their own hometowns, if Duterte is there.

I write about the ban today because I believe I owe it to Rappler readers to explain what is going on. I owe it to other journalists, too, because whether they acknowledge it or not, this ban on Rappler will affect them, if not now, then in the future when other “pikon” presidents or government officials will attempt to ban them because Duterte was able to do it.

I’ve done my best to report on the President despite this ban. We were the first to report on his hospital visit in July 2018. We had two exclusives on presidential adviser Michael Yang, a Chinese citizen. We brought you the inside stories on Duterte’s decision to close Boracay and his explosive proclamation attempting to revoke Senator Antonio Trillanes IV’s amnesty. We report on other questionable acts of Malacañang officials, such as the expensive billboards and donations of former aide Bong Go and the controversial chopper landing involving Presidential Assistant for the Visayas Michael Dino. We continue to fact-check the President.

In short, we’ve been putting all our efforts into minimizing the ban’s effect on our Palace coverage. We’ve been trying so hard to cover such an important institution the Rappler way. And there is a Rappler way, just like every other news group – be it the Inquirer or ABS-CBN – has its own unique perspective, method, and style in covering the Palace.

And so it is wrong for Presidential Spokesman Salvador Panelo to sugarcoat the ban and say we are not hindered from covering the President because we get to watch press conferences and speeches on television or Facebook.

It’s wrong for him to say all is well because I can send in my questions during press conferences and the reporters present will ask them for me.

“Even if Pia was disallowed from coming here, the fact is, you just saw, she can still ask questions and we’re still responding. She can still cover. Nothing has changed except her physical presence,” Panelo said on December 14, 2018.

Journalists worth their salt will agree that monitoring a speech, press conference, or event is not the same as covering it. Covering means physically being there, seeing with your own eyes the events as they unfold.

Why? Because when you only watch via livestream, your eyes see only what the camera permits you to see.

For instance, when Duterte attended the inauguration of the Bukidnon drug rehabilitation center donated by Chinese tycoon Jose Kho, we could only report on the President’s speech because we were not in the venue. If we were, we could have done separate stories and video reports on the center itself, its quality, its size, and potential impact. We could have interviewed other officials or personalities who were there just for the inauguration, to give our readers more information about the facility.

At a time when there are rumors and allegations about Duterte’s health, all the more it becomes important for a journalist to see him up close, observe how he conducts himself, and either confirm or dispel the rumors. It is important for the media to be able to report accurately about the President’s health.

When you’re limited to watching livestreams, you will just have to trust the camera to show you everything, which of course, it cannot do.

Not being physically present at these events means I can’t join media interviews with the President. I can’t ask an official at the event about an issue or controversy Rappler is closely following.

And even when I do get to ask indirectly, such as when fellow reporters ask my questions for me, there is no way for me to follow up on the question immediately or rebut Panelo’s response.

Malacañang has made it impossible for me to do my job as a reporter to its fullest extent.

But why do we cover the Palace? Journalists don’t cover for themselves, but for the readers their media groups serve.

That is what Duterte and other Malacañang officials don’t understand. When they ban a Rappler reporter, they are banning a sector in society that reads Rappler and depends on it for news.

Many Rappler readers are Filipinos who pay their taxes, vote, and have as much a right to news about the President as the die-hard Duterte supporter.

These readers go to Rappler because we offer something different, just as other news organizations also have their own unique brand of storytelling and focus on specific issues.

For Malacañang to truly respect press freedom, it must respect the spectrum, the variety of viewpoints offered by all media groups. The moment it cracks down on one, it already becomes an enemy of the so-called “free marketplace of ideas,” an ideal ironically often highlighted by former Duterte spokesman Harry Roque.

The true test for a free press is not when “most” publications are left alone. It’s when even the most critical voice is allowed to speak.

Aftermath of the frigates, SEC issue

Which brings me to the next point: why Duterte continues to ban Rappler.

Many people think Duterte banned us because of former Rappler reporter Carmela Fonbuena’s piece on Bong Go’s alleged intervention in a multibillion-peso Philippine Navy frigates project with a Korean supplier.

Actually, even after this piece was published and Duterte called Rappler a “fake news outlet,” I was still allowed to cover. What really did us in was our coverage of the Senate hearing about the controversy.

Go did not like my story, “Bong Go says his office ‘endorsed’ frigate supplier’s complaint to DND.” He claimed this was fake news, even if I had been quoting his written speech which he read out during the Senate hearing itself. Go even printed out my article and showed it during the hearing. (The next day, Panelo would pathetically try to explain that I misquoted Go since Go supposedly said “indorsed” rather than “endorsed.”)

It was the night of that hearing, at around midnight, when Duterte told Malacañang’s Internal House Affairs Office chief Jhopee Avanceña that Rappler CEO Maria Ressa and I are barred from the Palace – even if Maria did not write any of the stories that upset him.

It’s funny that the articles Duterte uses as basis to call us “fake” are articles based on documents and on-the-record statements made by public officials themselves.

Carmela’s article was based on sourced documents confirmed by Defense Secretary Delfin Lorenzana and a former undersecretary in Go’s office. The article that irked the President was a written statement read out loud by Go for all the world to hear.

The punchline to this joke is that, months later, Duterte himself confirmed our articles. In fact, he added to it, saying Go’s actions came with his blessing.

“There was this Korean who represented this – ‘yung nagpabili, sir (the one who ordered, sir) – and he was complaining why there was yet no order to deliver na nanalo sila (when they had already won). So, ‘yung letter niya ibinigay ko kay Bong (his letter I gave to Bong), ‘Give it to legal,'” said Duterte on October 18, 2018.

It’s important to note that Rappler’s stories on the frigates deal never alleged corruption by Go or Duterte, yet. The stories only claimed that Go intervened. Intervention by a government official, while unusual, is not always a bad thing. One can intervene to fast-track a delayed project. One can intervene to correct a mistake or save something from disaster.

We wanted to leave our readers to judge for themselves the nature of Go’s (and Duterte’s) intervention. We stuck to the facts, in fact waited to get Go’s side before publishing our story (which is why our story came after the Inquirer’s), and for this, we were branded a “fake” news outlet.

Can a Duterte supporter, or anyone for that matter, identify a Rappler article that was false and intentionally published despite it being false?

Apart from “annoyance” at our reporting, Malacañang claims it can ban us from presidential events because of the Securities and Exchange Commission (SEC) ruling revoking Rappler’s license to operate. Never mind that the SEC decision was announced in January and Duterte ordered the ban only a month later.

But the Court of Appeals (CA) has already acted on our motion for reconsideration. The CA gave merit to Omidyar Network’s donation of the supposed problematic Philippine Depositary Receipts (PDRs) to Filipino managers.

In short, whatever deal that made the SEC think foreigners have some level of control over Rappler no longer exists. No one can now argue that Rappler can be controlled, much less is owned, by a foreign entity.

And even then, the requirement of SEC registration only applies to MPC membership (which was retained for Rappler). Even non-MPC members can cover some presidential events, like those labeled as “open for media.” So even if our license was revoked, we should not have been barred from events outside Malacañang that are open to all media.

As Harry Roque had argued behind the presidential spokesman’s podium, Rappler’s work as a media organization is separate from its operations as a business entity. Meaning, we don’t need SEC registration to be journalists.

Last January 29, I was able to speak with the President. I used the advantages of a public event, the premiere of former police chief Ronald dela Rosa’s biopic, to catch Duterte.

I hid myself among other mall-goers waiting behind cordons to watch VIPs walk down the red carpet to the movie house. Duterte recognized me from the crowd and told me to approach him. I was allowed on the red carpet.

I asked him when he would lift the ban. With mischief in his eyes, he said, “I’ll lift the ban if you vote for him,” as he gestured towards Dela Rosa who was beside him.

Each day Rappler is banned from covering Duterte’s events is another day this administration proves it’s an enemy of a free and critical press. – Rappler.com